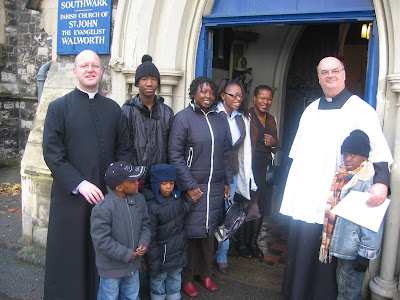 Former students of St Stephen's House are working in very diverse situations. Fr Simon Askey is no exception (on the left in the picture above). Formerly a member of SSM (as Br Gary) he undertook legal training while still a monk, and has held a number of teaching posts since then. Now he has a very high-powered job coordinating the teaching of a number of Universities in England and overseas. This week he is just back from the USA and Hong Kong, and goes off again to the Far East in a few days time. In the interim he assists at St John's Walworth; and so he persuaded his Vicar, Fr John Walker (on the right in the photo), to invite me to preach for the start of the church's year of celebration which marks its first 150 years. The congregation renewed their Baptismal promises at the start of the year.
Jane and I had a marvellous time there. The church barely gets a mention in Pevsner - just the barest note that 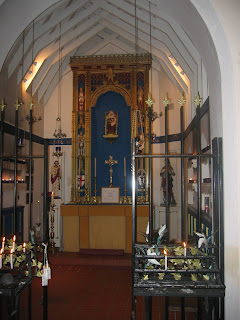 it is by H Jarvis, with some fittings by Comper (on the left, the Lady Chapel). The reality is a lively and happy worshipping community, many of the people with their origins in Sierra Leone and the West Indies though many of them have been in Walworth for twenty years and more. I also met a couple from the Philippines - they are soon to be married, he is a widower and his bride-to-be admits to being over 80! There was also a splendid number of children - all very well be 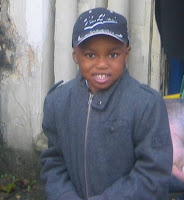 haved - a good serving team, and some fine congregational singing.
On a Sunday like this it's good to be retired and able to visit places which are quite new to me; though the driving becomes more of a bore each time. Thanks to an old friend, Eileen Slatter, Jane and I were able to drive up on Saturday and stay the night in her flat before driving home to Lymington on Sunday fortified by a great Vicarage lunch. I was baptised in South London, where my grandmother lived. Holy Innocents South Norwood was the church; like Walworth it is now in Southwark diocese, though all those generations ago it was part of 'Canterbury without' - a little enclave of the Archbishop's, surrounding his former palace in Croydon. It was swept up in a tidying effort in the mid twentieth century. Now we look as though we might be getting some new peculiars, in the Ordinariate. Hurrah!
Posted by Edwin at 18:49