That is to say, I have lost it - my camera, that is. Either at Allen Hall or on the train home. So until it returns, or I get an old one working again, this blog will only have documents or drawings to offer.

Yesterday deserved some pictures. We were at Allen Hall for the meeting of all the ordinariate priests and those soon to be ordained. So many of us that the student body was nowhere to be seen; I think their vacation has already begun. It was especially good meeting old friends in the "second wave". Those in the archdiocese of Southwark are still awaiting a date for their deaconing - the Archbishop was away at a crucial moment so documents did not get to Rome in time. It will be good though to be able to attend the Ordinations of Paul Gibbons and Donald Minchew Before then there are still a few outstanding Priestings: Fr John Hunwicke's in Oxford (which alas I cannot attend) and Fr David Boundy's in Salisbury at the end of July when I hope to concelebrate. (Incidentally I fancy "Deaconing" and "Priesting" are not words commonly used among Catholics - maybe part of our Anglican Patrimony?)


The train was late yesterday, the buses even worse, so I crept into the Library - we were too many for the usual lecture room - to find our Ordinary in full flow. He seemed in particularly good form, and we had helpful contributions from Mgr Broadhurst and Mgr Burnham. It seems the book now in production (our temporary "Ordinariate Use" for the Offices, Calendar &c) is a little delayed and will not be available until September.


After lunch, a Group Photograph (already on the Ordinariate site), then another of the second wave of former Anglican clergy, and after that single mug-shots so that "celebrets" can be produced - documents to enable us to be accepted as Priests anywhere in the world. Then a major contribution from Fr Kristian Paver, the Chancellor for the Ordinariate. He was hugely helpful in answering all the questions thrown at him, many of which concerned Marriage - marriage breakdown, divorce, annulments &c. Perhaps the most important part of his message was simply this: "Care for the divorced and remarried is a pressing and central part of the Church's ministry today". All of us in local Groups have our part to play in exercising that care, and seeking to help regularise the situation after remarrige, if that is at all possible. 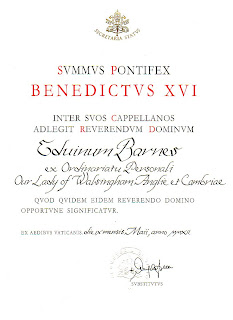 The oddest thing about arriving late was to discover Mgr Keith speaking about me - he was waving a document (reproduced above) with the news that the three of us who had been Anglican Bishops but were now retired were to be made Monsignori. It will be good to catch up (as I hope) with Mgr David Silk at Buckfast next week : and Mgr Robert Mercer's elevation will be a great encouragement to many especially those in the TAC or who have been in his care in time past. As for me, members of our Group and other friends have been inundating me with congratulations, and I was also warmly greeted when I said Mass this morning (of SS John Fisher and Thomas More) in Lymington. Mgr Mercer was typically self-deprecatory: 'it doesn't mean a lot', he said. Certainly the accompanying letter mostly told us what we could no longer wear... the purple cassock, the ankle-length sleeveless purple mantle, the sash with tassels, the buckled shoes - all were abolished in 1969. Rather a mercy - I always found purple a very unflattering colour! And since I rarely wear a cassock the one remaining piece of finery will not often be on view (black cassock with purple trimmings, and a purple cincture). But it was very kind of our Ordinary to commend us to the Holy Father for this honour, and I have to admit to being rather happy about it.
Posted by Edwin at 11:41 7 comments:

A Cry for Help

We see Syria on TV: now here is a plea from the Church in Syria for our help. It's a pretty rough translation I've made from contact@aed-france.org (L'aide a L'eglise en detresse) where you can read the original in French. I guess it is the French branch of Aid to the Church in Need - but if the English section has made a similar appeal I have not found it yet.

Dear friends. Today is the 'World day for Refugees' announced by the Holy Father at the Angelus last Sunday. He deplores as we do the situation of "so many people, families especially, who have to flee their homelands, menaced by armed conflict and severe forms of violence".


It is precisely to help these refugee families that I write to you today with such urgency. We have just received a pressing appeal from the Church in Syria, aiming to help several hundred families from Homs which thay have had to leave.


Syria is plunged into violence and chaos. And in this conflict which paralyses the country, it is the weakest who suffer the most. Econonic embargo, inflation, utter devaluation of money, rapidly spreading unemployment, destruction, the displacement of civilians and victims by the thousand... Their suffering is intensified by the misery and hatred which grips them ever more in the absence of humanitarian aid.


Syrians are in a state if shock. They are fearful. The Church in Syria has directed an appeal to us. An appeal to help five hundred Christian refugee families who have fled the warfare in Homs, and taken refuge in Marmarita, not far from the border with Lebanon. The bishop has done his best to provide basic food, temporary shelter and medical help for them, but the needs are immense.


So, while Muslim refugees are helped by the Arab States such as Saudi Arabia and Qatar, the church represents the only hope for Christian refugees. In all, around a thousand families are waiting on external help. AED is seeking to raise 80,000 Euros. That amount could sustain the basic requirements for five hundred families for six months.


In these exceptional circumstances I ask you


1. To pray the Lord that this ravaged country might find a peaceful outcome which respects the faith of Christians.


2. To make a gift whcih will help the immediate survival of five hunder Christian refugee families, and so to respond to the appeal of the Syrian Church.


3. To offer Masses for the priests remaining in Homs, to help them to survive - as the Syro-Catholic bishop of Homs, Mgr Kassab, has asked of us.

'It must be a bit of a balancing act', 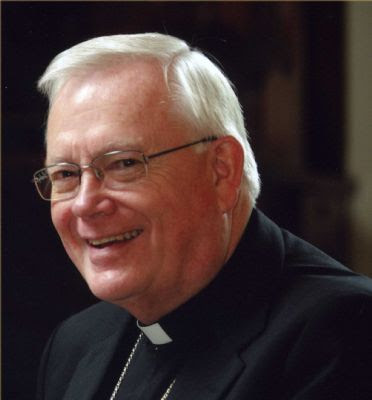 said Bishop Peter Doyle of Northampton (above.). He was speaking about the Ordinariate, and our need to preserve our identity yet also be seen to be no less Catholic than the parishes around us. We were at a celebration in Sacred Heart, Bournemouth. Fr Bruce Barnes, the parish priest, had invited me and members of our Ordinariate Group to join his parish for the Feast of the Sacred Heart. He himself had been an Anglican (he was a lad in the parish where I served my Title in Portsmouth) and was ordained into the Catholic Priesthood back in '97. At one time he was Fr Peter Doyle's colleague in St Peter's Winchester - hence the invitation to Bishop Peter to celebrate and preach, It was a marvellously multi-cultural Mass, with a reading in Portuguese and the Gospel repeated in Polish. Besides Fr Peter who ministers to the Polish Community in Bournemouth we had a Mill Hill Father with us concelebrating who is off to Kenya later this week.

That was a great occasion; and Fr Bruce explained that Catholics were not as good as Anglo-Catholics at celebrating Patronal Festivals. So he has retained that part of the Patrimony, together with a liking for incense, good liturgy, and congregational singing led by a very good choir. Those of us who attended from the Ordinariate felt entirely at home, and met many of the congregation at a bunfight in the palatial Hall after Mass.

Then the following day we joined with the Parish of Our Lady Queen of Peace for a Jubilee Party, which involved more eating and drinking, and a Quiz! It was all very jolly; but the night seemed pretty short for I was still preparing notices for today at Midnight, and we were back in Southbourne at 9am this morning ready for our Ordinariate Mass. Later today many of our Group were at a 70th Birthday Party, where we were joined by old friends who (at present) remain in the C of E. There I had the pleasure of blessing the new home of the Birthday Boy, Trvor Vendy, one of our stalwart band of servers.

The best thing of all today was the news that our Deacon, Fr Brian Copus, is to be ordained Priest by Bishop Alan Hopes in Bournemouth at Noon on September 22nd - but more of that later. For now, just put it in your diary.

[There may be more photographs added to this blog later - some of the Group were clicking away at all these events]
Posted by Edwin at 15:56 1 comment: