Q. Why should anyone attend two Chrism Masses on successive days? 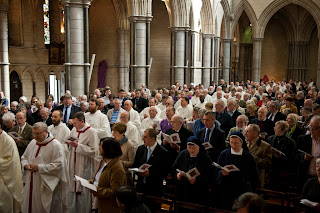 A. Because he is a priest of the Ordinariate, who also has responsibilities in a Catholic Diocese. So on Monday it was St James' Spanish Place at 11am, presided over by the Apostolic Nuncio to the United Kingdom, His Excellency the Most Reverend Antonio Mennini, with our Ordinary, Mgr Newton, receiving our renewal of vows and preaching. 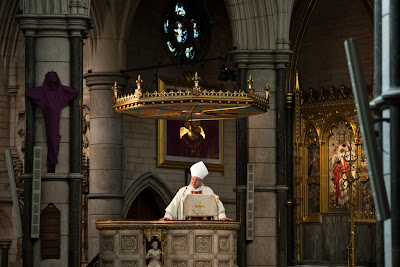 My, that was a rush; our train was impeded by a broken-down freight train. By Divine Providence the Nuncio was also delayed, which gave me just time to dive into a chasuble and join the procession. 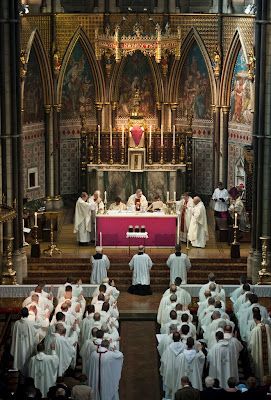 After a sandwich lunch, Mgr Keith addressed his priests (and what a good turn-out there was; more than fifty already ordained, and a number of others hoping for ordination later this year). He and Mgr Broadhurst spoke of the financial situation, how we are doing better than we were, but that there is still a need for more committed giving - not least because we have the resonsibility of paying pensions for our priests. I had to dash off before the meeting ended, since I was on duty in the evening hearing confessions as part of the Penitential Liturgy in Lymington.


Although the liturgy was the same, the feel of the event today in Portsmouth was quite different. Whereas in London a choir sang historic settings of Sanctus and Benedictus, in Portsmouth the entire eucharistic prayer was intoned by Bishop and concelebrants. The sermons, too, were both very inspiring, and both quite different from each other. Bishop Crispian began in Portsmouth "When I preached at this Mass last year, I was confident that it would be for the 23rd and last time. However, as they say, man proposes and God - and the Vatican – disposes and I am still here to celebrate with you my 24th Mass of the Oils. I am as certain as anyone can be that I won’t be here this time next year, though you never know!" There is clearly great affection between him and his clergy, and warm applause greeted what he had to say. You can read it for yourself at http://www.portsmouthdiocese.org.uk/bishop/homilies/2012_Sermon_for_the_Mass_of_the_Oils.pdf. Equally, Mgr Keith's sermon is available at the Ordinairate website, along with many pictures http://www.flickr.com/photos/catholicism/sets/72157629723790149/show/
The ones in this post are taken from that set, by the kindness of Dn James Bradley.
Posted by Edwin at 19:35 No comments: 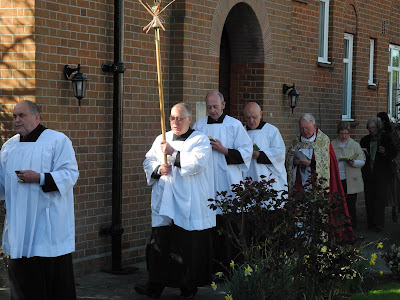 A very special Palm Sunday. We processed from the hall into Church, the sun shone, we sang wholeheartedly. 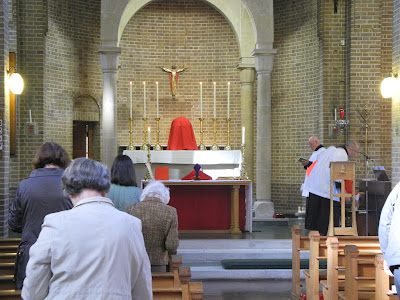 Several returned in the afternoon for Evensong and Benediction which was supported by organist and singers from a neighbouring Anglican church. Then, to crown it all, there was an unexpected accolade in the Diocesan Magazine, "Portsmouth People".

The diocese has been very welcoming from the start, and we have received great help and encouragement from Bishop Crispian. Today, though, it was a letter from a parishioner in Southbourne, where we share the church building, which gave us a great boost. It is in the letters pages of "Portsmouth People", headed "Ordinariate Privilege". It shows a depth of understanding about the Ordinariate which is very welcome - and so I dare reprint some of it here. I just hope we can live up to it!

"We at the parish of Our Lady Queen of Peace... were privileged last year to have the new members of the Ordinariate join our parish; they were all (around 25) received into the Catholic church at the Easter Vigil... and they are now fully Catholics, although at the Pope's request they have kept a few features of their Anglican ceremonies, such as beautiful music, or the (optional) use of kneelers during Holy Communion.

These slight differences are merely superficial; the Ordinariate members have been delighted to embrace the Catholic faith completely, while nevertheless adhering to the Poe's wishes that they keep their own masses and services slightly separate so that more Anglicans, particularly those who are unwilling to give up some of the own traditions, may be attracted into the Catholic Church. I have been to the Masses (of the Ordinariate) and they are almost identical to our non-Ordinariate Masses, though it has to be admitted that the singing may be slightly better. It is indeed very enriching for us to have the opportunity to attend Benediction and Mass with them... I would like to thank them for enriching our parish with their presence ... I hope that the Ordinariate may continue to act as a bridge for new Catholics for a long time to come."

For our part, is is very good that some from local parishes join us from time to time - as also today we had help at Benediction from a Server in a local Anglican Church. Throughout the Triduum we have been invited by Fr Gerry to participate in the Parish's liturgies, and I am to preach at them. We pray that this mutual enrichment may prove a great blessing to the whole Church. On Easter morning, when we celebrate again as an Ordinariate at 11.30am, it might seem quite lonely!
Posted by Edwin at 23:26 No comments: