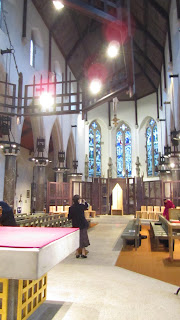 What will replace these Ordinariate ordinations once they are concluded in a week or so? They have been terrific social occasions as well as hugely important ecclesiastical ones - great for catching up with old friends and meeting new ones. It is a 300mile plus round trip from here to Plymouth - yet even people in London seem to suppose that Plymouth and Portsmouth are next door to one another, and both equally far from London. When eventually we persuade them to make the journey to Lymington they are amazed to get here in about 90 minutes. To Plymouth by road from Lymington is over 3 hours - or it was in the downpours yesterday, and back again today. 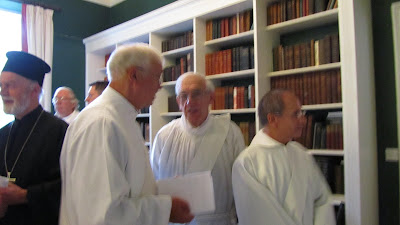 Waiting for the Kick-Off

Vaut le voyage, though, as the Michelin guides say. Particularly since about a third of the Catholic clergy of the diocese seem to be former Anglicans - including the Administrator of the Cathedral. Now they have a further seven who, while belonging to the Ordinariate, will also be available to lend a hand in the diocese. With them, too, was one genuine Plymouth candidate. 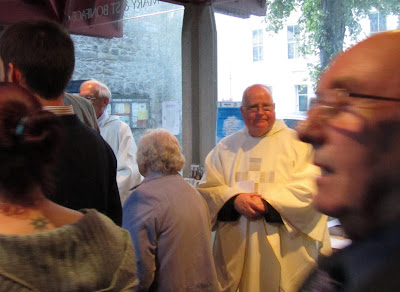 Seeing the congregation out

It was good, too, so see a number of Anglican priests from the dioceses of Exeter and Truro in the Congregation, and to hear their plans for being in second or subsequent waves. Good, also, to catch up with other old friends. Robbie Low (heading for Ordination at last, by the 'ordinary' route) and Sara his wife were there, as were others I've known even longer. Peter Glazebrook and Robin Ellis read Law at Pembroke, Oxford more than half a century ago - I was an exact contemporary of Peter's, reading theology. Now Peter is retired, though still keeping a finger in the pie at Jesus College Cambridge where he was Law fellow for many years, and last night Robin (formerly Archdeacon of Plymouth) was ordained a Catholic Priest. His son Simon is among the candidates in Nottingham this evening. 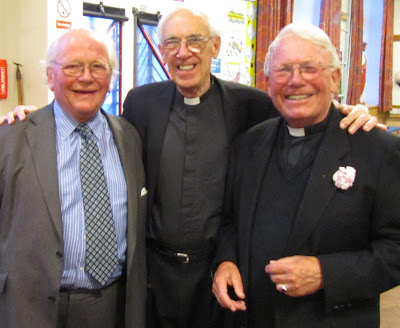 Two Lawyers and a Theologian from Pembroke in the 1950s


Msgr Keith was in good form - though he is facing even longer journeys, with an Ordination this evening in Nottingham. Next week he will be back down here in Portsmouth for three more priestly ordinations. It was very good of Keith Haydon and his wife Kathy to put me up overnight in Plymouth. We have been good friends from way back when he was Vicar of Cowley and I was down the road at St Stephen's House. Now he is running a Plymouth parish with four churches while being, in theory, a retired house-for-duty priest. Very sadly his Vicar died shortly before Easter, and Keith has been shouldering the burden ever since.

I hope others will publish photographs from the actual Ordination. As a concelebrant I was only able to get a few before and after the event ... (and apologies for the blurry picture of my overnight host)
Posted by Edwin at 17:46 4 comments: