Tied up in Notts

A flying visit to the Ordinariate Group in Nottingham at the end of last week. 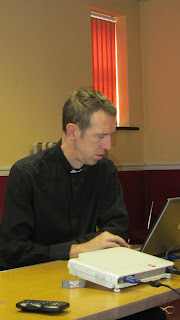 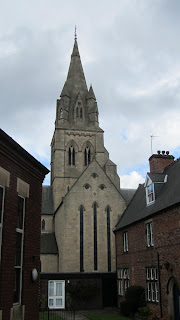 Fr Simon Ellis had cunningly invited me about six months ago to speak to his people on 'the Year of Faith', and it is hard to plead a prior engagement at such notice. So on Friday the Cross-Country train took me up to Stapleford, where Simon and Kate's long-suffering daughter Anastasia turned out of her bedroom for me.

On Saturday morning we were off bright and early to go into the centre of the city, to the Cathedral. What a wonderful pile it is, one of Pugin's great works for the Catholic Church, with a very convincing attempt at Early English Gothic Architecture. It is no mere pastiche, though, but a lovely building in its own right. There is a house for the Cathedral Staff next door, and a good new building providing conference facilities.

We met first in the Conference Centre to begin to get to know one another. We were a marvellously diverse bunch, with a few of the 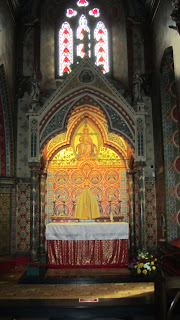 regular Cathedral congregation who joined us for the day. There were people with  roots in Port Talbot and Liverpool, Hong Kong, Hertfordshire and Derby. Indeed, there are some who live in Derby but worship regularly with the Ordinariate Group. Unfortunately the Group is not able to have a Mass every Sunday, but besides the weekday Mass there is worship together on one Sunday each month. I do hope a way is found for them to have Mass together Sunday by Sunday - certainly in our Bournemouth Group I think we could not have survived and kept together without this.

After a time of prayer in the lovely Blessed Sacrament Chapel we went to our meeting room to share our picnic lunches. Good to find other old friends there, not least Fr Peter Peterken who has been such a support for Fr Simon - despite being somewhat older than the Holy Father. 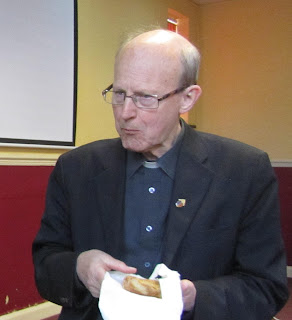 In the afternoon I did my spiel, speaking about the opportunities which the Ordinariate has - provided it is genuinely humble in its approach. We thought about the way our background shapes us - my own schooldays in Plymouth asserted that Francis Drake was a great hero; to those brought up as Catholics his reputation is rather less sunny. We looked at small ways in which the Ordinariate can encourage Catholics to move out of a ghetto mentality into Mission mode. All the participants were very kind, and though I was not home until after 10pm (and the following morning, today, was preaching in Bournemouth at 9.30am) it was well worthwhile - for me if not for them. 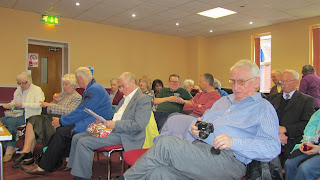 ﻿
Some of the day's participants﻿

This afternoon our Bournemouth Mission celebrated Evensong and Benediction, conducted very splendidly by Fr Brian Copus and our teams of servers and musicians. On Tuesday Bishop Philip Egan has invited some of us from the Ordinariate to join his priests in a day on "The Clergy and the Curial Review" - a review shich is taking place in Portsmouth Diocese now that the Bishop has been here long enough to have his priorities clear. It is good to be seen as relating to the Diocese, even if we have to be a little tangetial to it.
Posted by Edwin at 18:50 No comments: