For those in Peril... 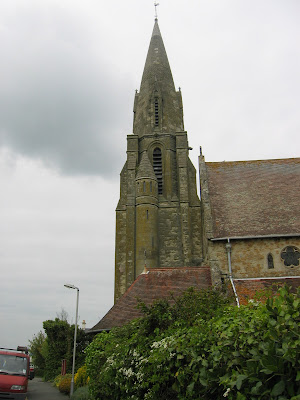 St Saviour on the Cliff 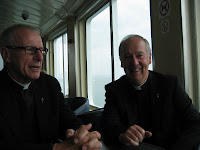 The SSC Chapter of SS Peter and Paul meets overseas sometimes; that is to say, on the Isle of Wight. We include brethren from the two dioceses of Portsmouth and Winchester. There is a ferry to the Island from Lymington, where I live, so the journey to St Saviour on the Cliff, Shanklin, was not very onerous. 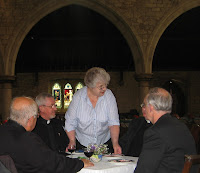 fty years ago this Trinity - my, how time flies when you're having fun!) I'd never before been to St Saviour's. It is an impressive Victorian pile, which has clearly had some wealthy benefactors. The former Vicarage was sold off when the parish was joined with its neighbour of Lake, but fortunately two church families bought it from the diocese and are generous in letting the parish use the garden from time to time. Today, it was a member of one of those families, a Churchwarden, who helped serve us with a ploughman's lunch (though if ploughmen ate lunches like that I doubt if much ploughing would have been done in the afternoon!)

We began with half an hour of prayer before the Blessed Sacrament, then celebrated Mass, ate our lunch in the North Aisle (which serves as a meeting place until the Victorian hall is restored) and then had a good and lively discussion on the matter of the Ordinariate. It is clear that in our chapter at least there will not be one single opinion; some are very keen to take the Holy Father's option at the earliest opportunity, other think they might have to be in the second rather than the first lifeboat. We were all concerned, though, to try to understand one another, and "to keep the brethren of the Society united in love and in faith" as our SSC prayer says.
Window of Christ the King 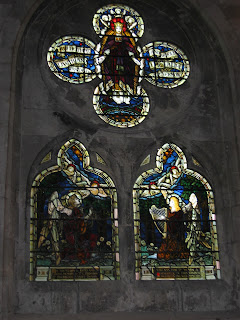 in the Chancel of St Saviour on the Cliff.
We are fortunate in having Bishop Keith as our PEV, and many of us are looking forward to following his lead at the right time, unmoved by those who mock us saying we are too timorous, or that we are waiting for a better offer from the Synod. I have outlined some of the reasons why the PEVs cannot rush our application to the Holy See. They need our continuing prayers for a calm sea and a prosperous voyage.

How to welcome a Pope 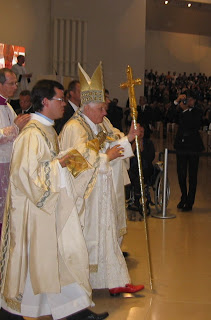 of Pope Benedict was in the newly built basilica, where he addressed nine thousand priests and religious. Through the good offices of the Bishop of Leiria/Fatima, our contingent of bishops and priests were admitted to this event; and bishop Keith and I had privileged seats at the very front of the assembly. Press photographers and security men were everywhere, yet we had a very good view thoughout. This photograph I took as he was leaving the Basilica. He went on into the crowds around the shrine, where he led the recital of the Rosary. This devotion is especially associated with Fatima, where the children who had the vision were told that the Lady they saw was the Lady of the Rosary.

The centre of the visit was the Mass celebrated on the Recinto, the site of the vision which the shepherd children received of the Mother of God. That occurred first on May 13th 1917, so it was on Thursday May 17th that the Holy Father took his place at the altar built in front of the 1930's basilica, where the bodies of the three visionaries are at rest.
It is difficult in words or pictures to convey the sheer size of th 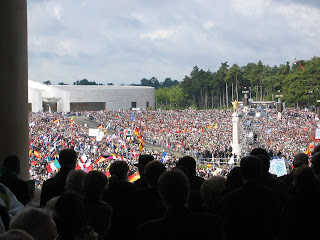 e crowd gathered to honour Our Lady of Fatima. Generally there will be around 400,000 of the faithful; this year, the estimate was half a million. They are enthusiastic, greeting the arrival of the Holy Father with repeated shouts of "Long live the Pope!"; yet throughout the Mass this great throng is quiet and focused as they concentrate on the action taking place before them - for many, in the far distance! The National TV network covered every part of the Papal visit, from his arrival in Lisbon, throughout his time in Fatima, and his last day in Porto. As pictures appeared on the screens in the church the night of his arrival, great cheers greeted his arrival by helicopter. 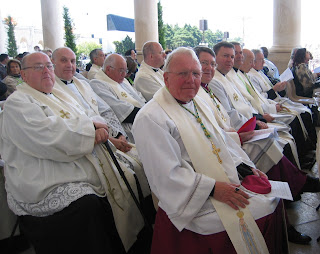 Our party included a dozen clergy - on the left, Fr Malcolm Gray, who organises us. In the centre, me and bishop Keith. We were assigned seats in the colonnade, very near the Altar. On an unusually chilly Fatima day the wind blew through the columns and kept most of us awake.

Fatima is not all fun and games, though. When the Ecumenical Friends of Fatima were established some ten years ago, we asked the Bishop what work he would suggest we might share in; his answer was the Community of Life and Peace, where former drug addicts are rehabilitated. Here is some of our group visiting Vida & Paz, in order to present them with our most recent donation towards their work. 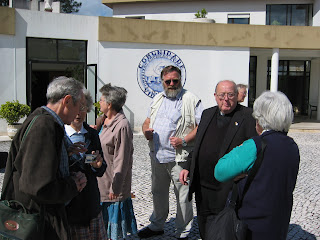 It would be good to think that some part of the enthusiasm of the Portuguese for the Holy Father might be repeated in England this autumn. As Anglicans, we have a special responsibility to try to explain why we find his such a sympathetic figure, one who has proved to be a Father in God to many of us who have been treated with less than fatherly care by some of our own bishops. More still, we have a duty to pray for the Pope, and for his visit when he will be honouring one of our own, John Henry Newman.