Oxford again today, but a very different occasion from last week. At St John’s New Hinksey, where he had been parish priest for ten years from 1981, we gathered to celebrate the solemn funeral Mass for Fr John Davis. Throughout my time at St Stephen’s House, John had taught Old Testament – and a great deal more. In particular, the sheer joy of being a priest, and the vocation to hospitality. The congregation in St John’s was a witness to his very varied ministry. So too were those in the Sanctuary. The first lesson was read by a French Monk, Dom Christopher Lesofski OSB, who had lodged with John while studying in Oxford. For the Ecclesiastes lesson, the reader was the Rev'd Andrew Brown, Minister of the Unitarian Chapel in Cambridge, who had studied the Bible under John at Harris Manchester College. The choir, which sang Fauré’s requiem most movingly, came from All Saints Highfield, where John had ministered during his retirement in Headington. The preacher was another old friend and former student of St Stephen’s House, Fr Charles Card-Reynolds FSJ, parish priest of St Bartholomew Stamford Hill.
As John had requested, Fr Charles’ sermon was not a eulogy, but a proclamation of the Gospel, calling us to pray for the departed. Fr Charles did, though, give us the wonderful picture of Fr John’s meeting with our Heavenly Father; who would be first to say to the other, “My dear”? For me, it recalled that most lovely of poems by an Anglican Divine, George Herbert's “Love bade me welcome”… 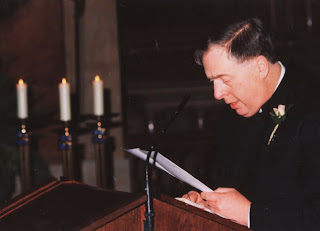 And so did we; we shared the Eucharist in thanksgiving and prayer for John, and we met and talked over a great buffet. How he would have enjoyed it all! And who is to say he did not, and does not, with Angels, and Archangels, and all the Company of Heaven. Requiescat.
This picture of John came to me from Chris Gillibrand; John was reading from the Song of Songs (what else!) at Chris' wedding.
Posted by Edwin at 21:18 No comments:

A good and very varied weekend, with rather too much driving (almost like being a flying bishop once more). It began with a ninety mile sprint to Oxford. The extra ten miles were after being warned on the Traffic channel of a collision on the road north of Newbury. 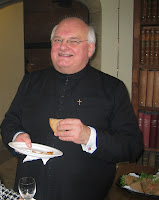 The reason for the trip to Oxford was a very happy event; the celebration of the first 125 years of Pusey House.

On Friday evening there was a dinner for friends and supporters of Pusey House. The Principal himself, Fr Jonathan Baker, presided with customary wit and elegance throughout what must have been an exhausting weekend. 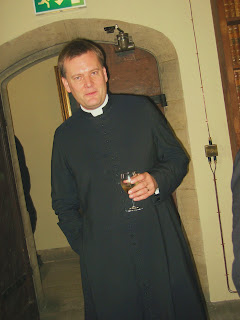 Here he is seen just half-way through the celebrations, during the reception after the Festival Mass on Saturday, with High Mass for All Saints and a Solemn Requiem for All Souls still to come.

Present at the dinner and at the Festival Mass on Saturday were many old friends. There were trad bishops: +Keith Richborough (rt.) was on good form, as was his brother of Ebbsfleet , seen here (as the Tatler might have said) in animated conversation with the Preacher at the Anniversary Mass, Fr Robin Ward, Principal of St Stephen's House. 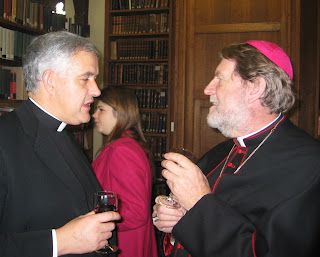 Other former Seminarians of St Stephen's House (besides, that is, Fr Davage, Fr Orford, the Bishop of Ebbsfleet, the Preacher and the Principal of Pusey House himself) included (right) the Blogger Blogged, Fr Hunwicke who, warned of my approach, almost managed to hide his glass.

At the glorious Festival Mass, the preacher excelled himself. In the peroration of his sermon, Fr Robin Ward looked forward to a time when Pusey House might be operating in a rather wider field than the present narrow confines of the Church of England. We all left with a sense that the history of the Puseum had barely begun - there are great things still to come.

Jane came up on the train (delayed, of course) and after the Mass and more Pusey hospitality we took off for East Anglia. 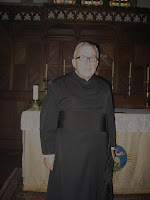 There yet another SSH Alumnus, Fr Jeremy Dowding, Diane his wife and son Tom welcomed us to Thorpe-le-Soken.... about as far as you can get from Fr Jeremy's homeland of Wales without falling off the edge of the map. We concelebrated and I preached for All Saints, we enjoyed a great luncheon, and the faithful Barnesmobile brought us back to Lymington without incident, completing a four hundred mile round trip. Just one more weekend which I shall think about when people say "Don't you find retirement terribly boring?". Boring it is not. Tiring, maybe, but boring, never.