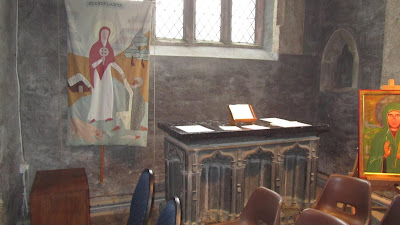 She is the Patron Saint of a North Cornish village, and her shrine (above) is one of the few to survive the Reformation. Yet Endellienta was not the reason for our hasty visit to the West. The Church (St Endellion's) [North Aisle, below] has within in a famous hostelry, the Cornish Arms at Pendoggett. Yet neither was that why we visited, except in a roundabout way. 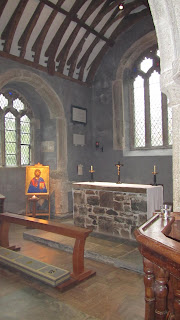 Almost half a century ago, we moved, my new bride and I, to the parish of Woodham in Guildford Diocese. The Vicar of All Saints was Fr Alan Wainwright, and I was his curate (in those days of second curacies) fresh from working in the team of nine - a Vicar, a Nun, and seven Curates - in North End, Portsmouth. Woodham parish had been a late 19th Century attempt to bring the catholic faith to the Anglicans of Woking, then as now a VERY Protestant part of the world. After the war, the London County Council bought a swamp and drained it, and decanted a few thousand Londoners into the country. They lived in the Sheerwater Estate, and Woodham parish was asked to look after it. A timber temporary church was erected, and a succession of bright(ish) young(ish) men in their second curacies went to pound the streets and care for the souls of the Sheerwater Estate, as assistants to the Vicar of Woodham.

After I left, Fr Alan decided he'd had enough of Parochial Church Councils and the burden of running a large parish. He told Bishop George Reindorp that he wanted to be a Curate again. 'Nonsense,' said George, 'you must take on bigger responsibility'. Now Maggie and Alan had a friend living with them who had a little money; and it was this friend, Nigel, who enabled them all to side-step the Bishop. They moved to Cornwall to buy and run a Hotel on the north coast. After a few years they took on the Cornish Arms (picture below), and later built themselves a house next door to it. It became famous for good food and drink, and great company. During his time as Landlord, Fr Alan would continue to wear his clerical collar, and he said he heard more confessions in the bar than ever he had in his parish churches. Certainly he and Maggie became well known and greatly loved throughout Cornwall, not least because Fr Alan was ready to step into the breach whenever there was a vacancy in a living, or illness or any emergency. 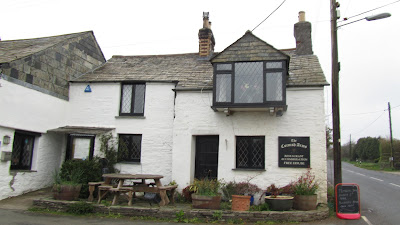 Throughout Maggie was a great hostess; she taught my wife a great deal about the art and craft of being a priest's wife, and from our first meeting we all were and remained good friends - which is more than every curate can say of his one-time boss!

Alan died a little while ago, but his widow Maggie survived him, and fought bravely these last years with Multiple Sclerosis and a number of other ailments. So today we gathered, son Hugh and daughter Pink, their children, old friends, many locals who had become friends, in beautiful St Endellion's to give thanks for Maggie and pray for the repose of her soul. The hymns were sung enthusiastically, beginning with "Praise my soul the King of Heaven" and ending with "Thine be the Glory". The Vicar, Prebendary John May, reminded me he had spent a Sabbatical with us in St Stephen's House. A former Vicar, Prebendary Michael Bartlett, delivered a eulogy, telling us of Maggie's time as a WREN (in the Women's Royal Naval Service which she joined at 18). She had worked at Bletchley Park, dealing with coded Japanese messages; which stood her in very good stead for running the Mothers' Union. We all laughed, and cried a little, as he helped us all to remember just how remarkable this Christian woman, wife and mother and friend, had been.

It was good to hear many of the familiar words of the Prayer Book in this very holy place. Maggie had left her body for medical research, but we commended her with great love to her Father and ours. May she rest in peace. Pray too for Nigel, in fragile health and now without the support of his two greatest friends. He bore up bravely today, and was an encouragement and inspiration to us all. 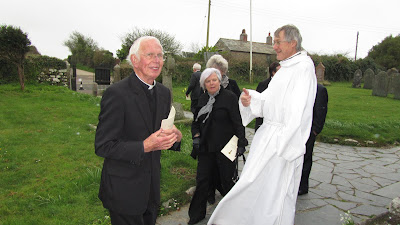 A Windswept Prebendary May greets people after Church - here with Fr Robin Thomas, who had put us up overnight in Truro
Posted by Edwin at 22:38 1 comment: