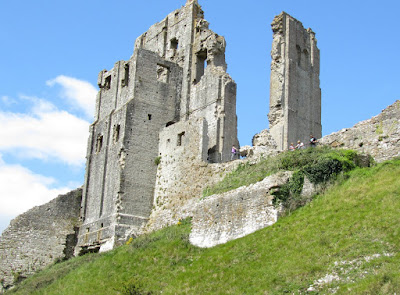 I have just posted on the ANGLO-CATHOLIC site (see side-bar for a link) so shall not repeat that. It was good, though, to have a great Civil War site put the present-day rioting in Tottenham &c into an historical perspective. I should also like to post a couple more photographs from today's visit to Corfe, so treat this simply as an appendix. I expecially liked seeing the steam train from the Castle battlements. Is an affection for steam trains part of the Patrimony? 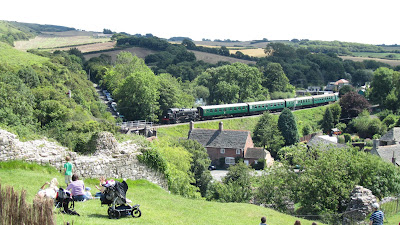 Hard on such a day to imagine the murder and mayhem of less than four centuries ago - but then, it is even hard enough for us who lived through it to remember the destruction and loss of the war. Pray for the priests and people of Tottenham, Walthamstow, Brixton and all the other places where looting and rioting are taking place - and pray too for the Police - and for the Media that they do not simply incite further violence by their breathless reporting.
Posted by Edwin at 22:40 1 comment: