We know about the Holy Father's devotion to John Henry Newman; perhaps this passage from the Apologia planted the seeds of Anglicanorum Coetibus? In the final section of his Apologia he writes how "national influences have a providential effect in moderating the bias which the local influences of Italy may exert upon the See of Peter". "Catholicity", he says, "is not only one of the notes of the Church but... one of its securities". Yet after considering America and the influence of the French in the church there, he hopes that "all European races will ever have a place in the Church". Then he comes to the passage which attracted me especially:
"I think that the loss of the English, not to say the German element, in its composition has been a most serious misfortune. And certainly, if there is one consideration more than another which should make us English grateful to Pius the Ninth, it is that, by giving us a Church of our own, he has prepared the way for our own habits of mind, our own manner of reasoning, our own tastes, and our own virtues, finding a place and thereby a sanctification in the Catholic Church".
It seems to have been an awareness that, despite the restoration of the Hierarchy to England, Pius IX's objects have not been completely achieved which has encouraged Benedict XVI to complete that work. Many have been puzzled to discern just what is the Anglican Patrimony of which Anglicanorum Coetibus speaks. We could do worse than follow the lead of Blessed John Henry by determining to bring with us into the Ordinariate 'our own habits of mind, our own manner of reasoning, our own tastes, and our own virtues'. That will be far better than chasing down the blind alley of Prayer Book versus Sarum Use or of the English Missal versus the American Book of Divine Worship. Liturgy is a sideshow compared with the breadth of the Patrimony which Newman adumbrates.
Posted by Edwin at 10:38 3 comments: 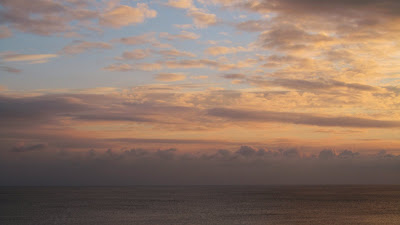 On his halfterm visit, we'd taken out ten-year old grandson to Southampton Art Gallery - where there is an exhibition of Bridget Riley's work. To our amazement, he said, "Oh yes, Op art; we did that in school last year". He was enthusiastic about the way her works seemed to move, though they were just paint on a flat surface. She was influenced, it seems, by pointillism (Seurat and all that), and the way the juxtapostion of different shapes can give life to a surface. Initially her work was in black and white. 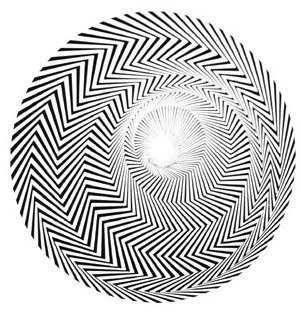 Later she moved into colour. So our day today started in Southampton Art Gallery to take an old friend, a cousin of mine, to the same exhibition. Then, in the afternoon we went to the coast, where the points of light on the sea and the colours of the sunset quite eclipsed anything any artist has ever done, even Turner; "And all for free!" said my cousin, wisely. 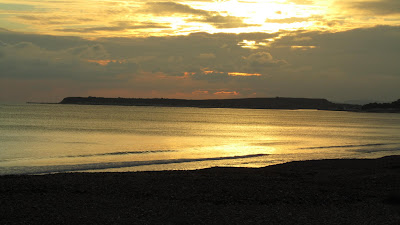 As a change from the internecine battles of the churches I thought you might like to have some views today, and a share in the evening light over the South Coast. But if you can get to the National Gallery, there is a Bridget Riley exhbition there for the next few weeks. Just be ready for your eyes to be out of focus for a while afterwards.

[To appreciate the surface of the water, just click on either of the photos for a larger version.]
Posted by Edwin at 20:58 No comments: