All on a Summer's Evening 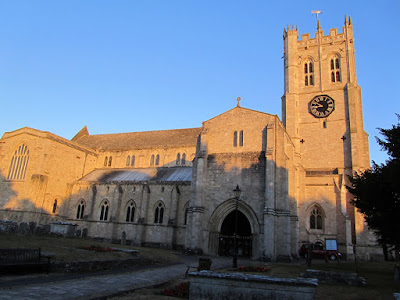 Christchurch Priory was lovely in the late evening sun. It is one of the most beautiful churches in England, and there we baptized four and confirmed twenty candidates. I spoke about the New Testament as the Last Will and Testament of Jesus. His dying wish (having nothing else to give) was that we would give thanks over bread and wine and so become his Body. But his parting wish, after the Resurrection, was that we should baptize people everywhere. So tonight we were fulfilling the express commands of his will. 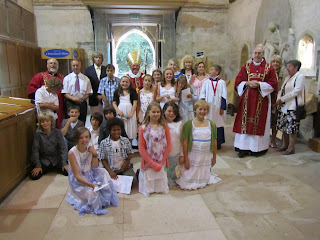 There were children and several older candidates, from the Priory Church (Holy Trinity) and its daughter church, St George's. Here they are by the West door, together with Fr Darryl and Fr Graham, assistant priests. The Churchwarden told me he is involved in the appointment of a new Vicar for the parish, and that the interviews are very soon. They need our prayers. They have taken none of the Resolutions, so it is a very likely launch-pad for some future female vicar to make her mark and be in line for a mitre. In which case tonight's very happy occasion will have been my last in that lovely place.

I never go to Christchurch without giving a thought to Margaret Countess of Salisbury. There is the grandest of late-mediaeval/Renaissance tombs prepared for her; but never occupied. Henry VIII was so angered (and threatened) by her - her family was close to throne by birth - that when he had her executed at the tower he refused to allow her burial in her own tomb. It is said that the doughty septuagenarian, mother of Cardinal Pole, refused to kneel for the axeman, so her head was hacked from her body as she stood... And we think Synod makes life difficult!
Posted by Edwin at 22:22 No comments:

On the Road - again

I expect many catholic-minded Anglicans will be glued to their computers this weekend, hoping to follow the twists of the various stages of the debate on women in the episcopate. I would be in that unhappy situation myself; except that I have more important things to do.

Tomorrow evening I'm due to baptize a number of new Christians and confirm about twenty in Christchurch ( "the Priory Church" as they call it - though it has not been that for about 470 years). It is in vacancy, and being looked after by (among others) a priest friend in SSC - indeed our local SSC Vicar, Fr Graham Smith. Then early on Saturday we are off to deepest Sussex for a wedding. Amy is the eldest daughter (of four) of our one-time baby-sitter. She is to marry a fellow member of the Metropolitan Police. That is the second of three weddings I'm helping solemnize this year; quite like old times.

Later that day we set off on the road, to make a stop at a Travelodge, en route for Sunday morning in Brum where I'm due at St Benedict, Smallheath, for their Feast of Title. With a following wind we should be home again on Sunday evening - too tired, I expect, to try to make sense of any of the reports of what Synod will have achieved, or more probably failed to achieve, by then. I hope I shall get a few pictures at the three events, in which case you'll see them early next week on this blog (or the Anglo-Catholic). I really can't get too worked up about Synod. Whatever it produces is clearly going to be of little interest to catholics in the Church of England. Our sights are set higher and further than the debating chamber of York University.

Quite a weekend. The morning was spent at the Ascension, Portsmouth in interregnum. They have completed a project creating a separate meeting room at the back of church, with some veryelegant glass screens. The head server was a bit frazzled being short of two of the pillars of his team, but still we managed a pretty good solemn Mass. It is good for me to have to do everything by way of setting the Altar &c. It was a good, full-throated morning; bit a bit of a trip down memory lane for me, having been in Portsmouth as a curate fifty years ago- and we even sang one of the Modern Church Music Group's setting for 'O Jesus I have promised' - which even with organ accompaniment soundy like something Henry Hall and his band might have knocked up on a bad day. Its the tum, tum, tum-titty tum' between verses that still slays me. 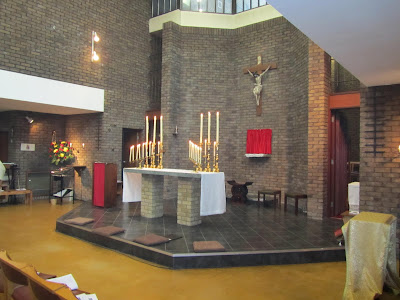 St Paul' Tottenham occupies the lower two floors of an apartment block which replaces the former Victorian church on the site.
We drove up to Tottenham in the afternoon; thought it would be a doddle going through central London. It was not, and we arrived very hot and tetchy an hour after we expected. But all was well once we were started. St Paul's was keeping one of its Feasts of Title (SS Peter and Paul) and there was a good band of priests sitting birettaed in quire. I should not have mentioned the name of the Patron so often, for it entailed much removal and replacing of hats. I am glad mitres are permitted to remain firmly on the preacher's head. 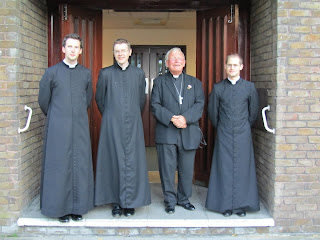 In this case, everything was done for me, even the removal and replacing of the mitre by a very helpful Priest MC (the senior curate). The deacon was the very newest possible, fresh minted from his ordination in St Paul's Cathedral - where he was the sole traditionalist among a sea of liberals and evangelicals, many of them ladies of a certain age who have decided to give up macrame in favour of church. 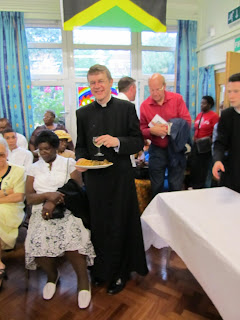 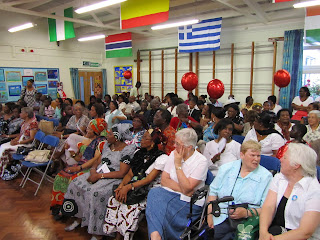 Parishioners and Parish Priest at the Party after Mass

We took the image of St Paul for a walk round Tottenham(under the very Spurs South Stand) and concluded with Benediction. Then it was over the road to the school for an amazing buffet - terrific goat curry, and huge numbers of other goodies provided by a parish team. The new Deacon struggled gamely with a dish of Tripe a la mode de Caen, before giving up. His Vicar was on hand to advise on the most tactful and expeditious way of dealing with such difficult situations.
We were entertained by a Steel Band, after which Jane and I headed off round the North Circular and by way of M25 to the M3 and home.... a very long day, but hugely enjoyable. What will become of parishes like these two after the decisions (or non-decisions) which Synod may take, or fail to take, in York next weekend? Keep the prayer wheels turning. 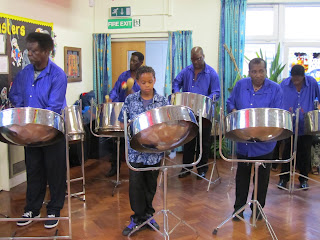