London Ordinariate : not before Time 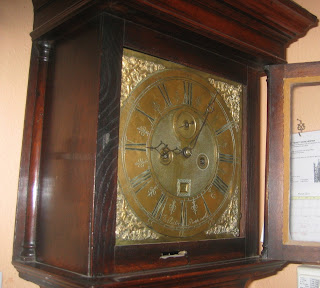 I am told that the London clergy are beginning to get their act together regarding the Ordinariate. Accordingly, I am very happy to direct anyone living in the Great Wen to the Ordinariate Watch site at:

A Priest in Every Parish 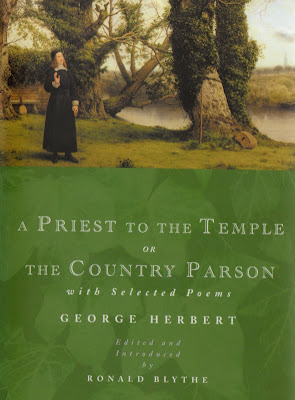 The Church of England still contends it is just that; the Church for our Nation. Yet where are the priests? Where will they come from in future? I understand there is only a handful of candidates at Mirfield this year, and St Stephen's house is not much better. But should this come as a surprise?

The Church Times recently published statistics about Ordinands. Now I was ordained just fifty years ago, and in that year there were around six hundred new deacons. This year there were 564, so we are doing well, aren't we? No, we are not.

In 1960 the overwhelming majority of new deacons were men under thirty, with a possible forty years of ministry ahead of them. They were almost without exception stipendiary, full-time clergymen. The then archbishop said that if we kept those numbers up, we would just about replace those dying or retiring. This was not in the days of George Herbert and his ideal of the country parson; it is recent history.

In 2009, of the 564 being ordained, only 309 were entering full-time stipendiary ministry. About half of them will have been women, so the number of full-time male deacons ordained is down from 600 to about 160. Well, that's pretty good, isn't it, since we have reduced the parishes by amalgamations.? No, it is not good. Compare the years of service to be expected now with 1960. Most of us then could look forward to forty years in the priesthood. Today, the number of candidates under the age of 30 is only 74. Seventy-four younger full-time priests - half of them female. Small wonder our colleges are struggling. And where will our Anglo-Catholic parishes get their priests?

Of the remaining candidates, the number between 50 and 59 being recommended has risen to 126. Go on a course at 55, complete three years training, and at 58 you are ordained; with, at best, eight or nine years of full-time ministry ahead. When set against years of ministry, it is vastly more expensive for the church to ordain older candidates. It is not many years since no-one would be considered for ordination over the age of forty. Now that is considered young.

This is a vicious spiral; ordain older candidates, and the young will have no model of priesthood to attract them. The Dean of Leicester said she was looking forward to a time when the church of England would be feminised. That is happening very rapidly; but the ministry is also becoming geriatric. Still there seem to be no misgivings at the prospect of young priests leaving the Church of England to join the Ordinariate. "There will be an influx of women to fill the gap". That was said in 1992. It has not happened. For how much longer will the Church of England be able to claim to be a Church of the Nation, with every soul in the care of a Vicar or Rector? Someone has to wake up, and start working, paying and praying for younger ordinands.
Posted by Edwin at 21:57 4 comments:

If the Church of England were to fail, it should be found in my parish 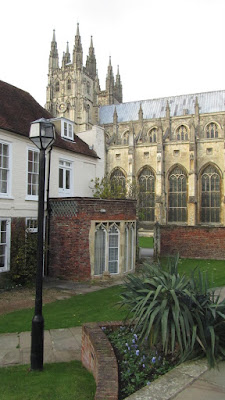 Grateful thanks to Fr Michael Gollop in his blog for reminding us of Keble's assertion; and how (although I heard it repeated in different words at a clergy meeting today) it can no longer hold. "It'll see me out until I retire" is not much of a mission statement. No need for me to waste space blogging about this: just a chance to show you a picture from Canterbury, and to refer you to Fr Gollop's piece on his own blogspot or on the Anglo Catholic site. The Canterbury picture is first a reminder that this is the Church of England which HAS failed: and is designed to encourage you to see my account of All Saints Day which I spent in Harbledown, just up the hill from the Mother Church of the Communion. [Also on the Anglo-Catholic site a day or two ago.]

http://www.theanglocatholic.com/
Posted by Edwin at 20:51 No comments: 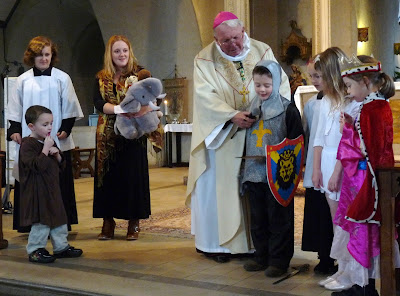 We pushed Halloween aside this morning at St Francis' Bournemouth, and celebrated All Saints. Some of the children represented certain of the Company of Heaven; I was introduced to St Sebastian with a tennis racquet - patron saint of Sportmen, I was told - I suppose it was because he became a dartboard for his persecutors. Then we had Francis (of course) with a collection of furry animals, St Vitus (in tutu) as Patron of Dance, and a very regal St Adelaide. I'd had to google her; born 931, daughter of Rudolph of Burgundy, betrothed as a child to Lothair of Provence. When Lothair died, leaving her with a young daughter, she was imprisoned for refusing to marry the son of Beringarius who succeeded Lothair. It is all exciting stuff .. and she is also called Adelheid. But no doubt you knew that already. 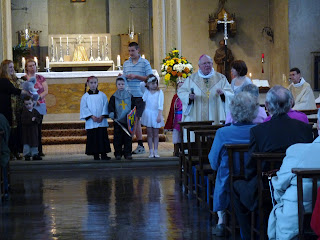 We sought for Saints in the Congregation


Then we got down to the business of talking about who is and who is not a saint. The epistle teaches us that we are children of God; and it does not yet appear what we shall be, but when he appears, we shall be like him, for we shall see him as he is. So we went through the congregation finding potential saints... since Saints is what we are all called to be. We wondered about John Henry Newman; had be been a Saint all the time? Surely he had; the Church simply reassures us about this when it Beatifies or Canonises its saints. And today is for all the thousands which no one can number, unbeatified, un-named, yet all part of that company which no man can number - the Company of Heaven who share the Bread of Immortality with us, at the Table of the Lord.
Tomorrow it is All Saints again, this time in the approaches to Canterbury... a confirmation at Harbledown.
Posted by Edwin at 17:12 No comments: