Where's that Patrimony, then? Part 2.

Oh dear: I thought the first half of my address to SVP [yesterday's blog] listed some of the things commonly thought to be the essence of 'The Patrimony' - ancient language, beautiful liturgy, rich hymnody &c - and then added BUT THESE ARE NOT OF THE ESSENCE because they are, or should be, the common concern of all Catholics, not just former Anglicans. Clearly I was misunderstood, since some have asserted that I was giving these priority. I don't; and I hope I said in the second part of my talk just what I DID think was at the heart of our Patrimony. It was about our concern for those beyond the walls of our churches... but judge for yourself, here is how the talk concluded:-

And here we do begin to get to a distinctive element in our Patrimony. Whereas Catholic Parishes count hundreds, even thousands, at Mass, Anglican Parish churches have been used to congregations of seldom more than a hundred. At its best, that has meant that the Vicar has a better chance of knowing his people. It does not mean, though, that he necessarily has an easier time than his Catholic counterpart. When an Anglican clergyman is appointed to his parish, he is inducted to his living. His parish is a geographical area, and until recently all marriages, baptisms and burials in that area were his concern. All the people in that parish were his to look after - and until recently many Anglican clergy tried to visit across the whole of the parish, not simply caring for nominal Anglicans. It is this sense of responsibility beyond a congregation which is, I believe, at the heart of our mission.

By being part of the ‘established church’, whatever that means now, the Anglican cleric has had the time to be a pastor to a whole community. At its best, that has meant that he would visit anyone in hospital - not just Anglicans, certainly not just his own flock - and from those encounters there would occasionally be a real conversion. So too with funerals. If in doubt, a person would be put down as ‘C of E’ – and that too gave, and gives still, great opportunities for genuine evangelisation, when bereaved families are visited before and after the funeral.

When we moved to our retirement house ten years ago there was still a hospital over the road. They built a new hospital, and gradually houses were built on the site opposite us, forty-one of them in the end. It gave me a conscience that I had no right to visit them. In my parishes I would have seen those newcomers as both responsibility and opportunity. If I’d not called myself, someone from our visiting team would have been there while the boxes were still being upacked, with a parish magazine to leave so that they knew when we met for worship. We had people keep en eye out for removal vans across the parish. The first few days after arrival were the best time. No one wanted you to stay very long, but you could answer questions about the neighbourhood – the doctors, the schools, the bus service – and your visit was often remembered many years after. A young couple were in my study preparing for marriage. ‘I used to be in the police’, she said. ‘I remember you visiting the Station soon after you arrived. We did not know why you had come, but we were glad you had’. It was as though being part of the Church of England gave us a right – and a duty – to do such things. I hope when eventually we get our Catholic parishes we shall continue in this way. I am sure some of the Ordinariate priests already are doing so. It is second nature to them.

Being part of "The Church of England by Law Established" gave us confidence to do this. Now if we believe that the Catholic Church really is meant to be the Church of this land, perhaps we can all rediscover this attitude, this sense of responsibility for entire communities - not just for those who happen to come to mass, or who had an Irish grandmother. It may be there are Catholic parishes where this happens; I hope so, and it would be good to hear your experience of this, and whether I am being quite unrealistic.

Last week they showed something of the funeral of Jimmy Saville. Typically, the BBC said nothing about how his fund-raising for Hospitals was inspired by his faith - and that is annoying. Then, when it showed the Procession coming out of Leeds Catholic Cathedral the commentator said something about it being “the City’s Cathedral” – once again I began to be annoyed. Then it occurred to me that perhaps this was of a piece with the way in which Archbishop Vincent is often asked for a religious slant on a news item when in the past it might have been the Archbishop of Canterbury. They say the Queen used to refer to Basil Hume as “My Cardinal”. It may be that gradually the Catholic Church is filling the space which was once claimed by the Church of England as the National Church. The Anglican Church is finding it ever harder to address the nation, and when it does, as in the St Paul’s affair, it does so with confusion. We should be getting bolder in using the media, expecting Catholic voices to be heard. I think there is a group of laypeople who are doing just that nationally. Perhaps we need to have more people locally making frequent contact with the local press and radio and TV; and if you are already doing it, hurrah, and let us know about it.

If, after all this, you say “But that is nothing different from what Catholics have always done”, that’s fine. It simply means our so-called Patrimony is less distinctive than I thought. But I believe it is an attitude to the outside world which the Holy Father wants us to develop - "The Church in the market place" - and something for which our Anglican experience has particularly qualified us.

Yet the truth is, we are Catholics. This week I have celebrated two masses for the Ordinariate – both of them straight from the new missal – and three masses in local catholic churches, where our parish priest is very hard-pressed. Our Group Council has decided that we should only have two masses each week which are billed as being ‘ours’, on Sunday at 9.30am and on Wednesday at 10.30am. The only difference between them and other masses celebrated in the parish is that we name our Ordinary, Keith, in the Canon, besides Crispian our Bishop. If we go to Mass on other days, we join our local Catholic parishes.

It is a delicate balancing act we are engaged in. We try to be as supportive as possible to our local churches, while keeping a distinct place for Anglicanorum Coetibus, groups of Anglicans. In our Ordinariate worship we are often joined by others, friends from St Joseph’s in Christchurch where the priest prepared our people for reception into the Church, from Our Lady Queen of Peace itself, and from other parishes – people who want to discover what we are about. What we are hoping to do, little by little, is invite current Anglicans to come and see for themselves what is going on. So many good members of the Church of England are very confused just now, especially those who would call themselves Anglo-Catholics. They were promised that they would always have an “honoured place” in the church of their baptism, but that promise is being ever more frequently broken. As they get more and more marginalised, and as the consecration of women as bishops draws nearer, we are trying to create a place of welcome for them.

We still have a great deal to learn. Our clergy are engaged in an ongoing course of instruction based on teaching at Allen Hall in Chelsea, at Maryvale in Birmingham, and at Buckfast Abbey. Young men with families are adapting to living on less than they were used to, and money is a constant concern for our Ordinary. But none of us regrets the step he has taken, and we are very grateful for the warm welcome and practical help given us by the Catholic Church in England and Wales. Somehow, together, we have to get on with the evangelisation of our nation. 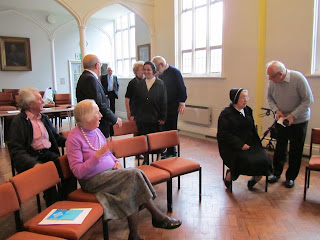 Members of SVP beginning to gather in the Milner Hall
Posted by Edwin at 16:31 1 comment: