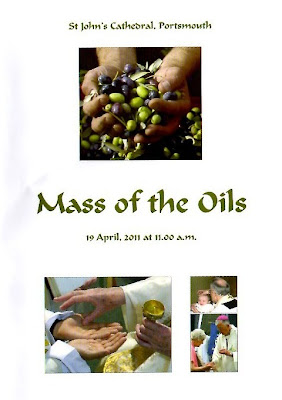 The Chrism Mass in Portsmouth was very special today. Eighty or so priests, twenty deacons, and a Cathedral full to bursting with the faithful from across the diocese: from South Oxford in the North to the Channel Isles and the Isle of Wight in the South. It could be a little daunting suddenly meeting a huge bunch of priests, hardly any of whom I had encountered before today - but I only needed to say the word "Ordinariate" and there was a great welcome from everyone. 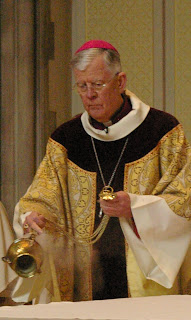 It was also a special occasion because it was (as he said, "probably") the last time Bishop Crispian will celebrate this Mass for the Diocese. By next year, he should have begun a very well-earned retirement.

The Music was a real treat today. Not just familiar and great hymns - "Christ is made the sure foundation" (a little bowdlerised ... no 'vouchsafe', for instance - not a great loss). 'Soul of my Saviour' (happily unamended) and then at the end the Ordinariate's theme, 'Praise to the holiest'. All that was wonderful. Even better was the singing of the entire Canon of the Mass, in a simple, dignified, and very prayerful setting, by Bishop and Concelebrants. The diocese is greatly blessed in its Musical Director and choir.

Then, during lunch, Jane and I caught up with several old friends. Fr John Barnes and Fr John Catlin, Fr John Humphries and his wife Alison, Fr Paul King and his wife Elizabeth. All of us had served around the same time, half a century ago or so, in the Anglican Diocese of Portsmouth. We forget what a steady movement there has been over the years, not simply since women's ordination and all that. Of course, I should not drop names, but there was another Curate in Portsmouth back in the early 1960's. He was serving in the Catholic parish of Corpus Christi - one Cormac Murphy O'Connor. I believe he did pretty well after his time in Pompey.

It was so good to be renewed in priesthood just a few weeks after being ordained. Good too to hear that this year there are nine new men beginning the discernment process on the road towards Ordination. And this week too the stream of former Anglicans is being welcomed into the Catholic Church. May it soon swell to a flood. Come on in, the water really is fine; and the welcome just tremendous.
Posted by Edwin at 18:08 No comments: