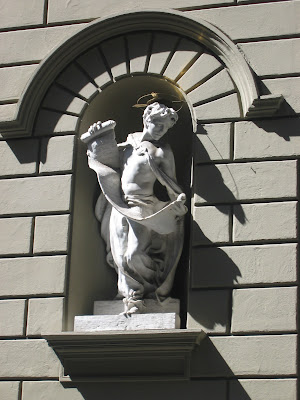 Special affection for Mark the Evangelist, since my Title parish was St Mark's North End (which does describes not its liturgical, rather its geographical position) in Portsmouth. In those heady days there were seven curates, a Sister of S Peter's Woking, and a somewhat bemused Vicar. He had returned to England from being Principal of the theological college in Calcutta, where he went straight from a post at Westcott House. So Peter May's experience as an Incumbent was nil. The merry band of curates rang rings round him, but loved him dearly.

Since the church was pulled down to be replaced by a brutalist concrete monster, I thought a better illustration would come from another St Mark's, in Florence. Other curates may recall a silly version of the almost equally banal English Hymnal offering for this day:

Thanks be to God for Good Saint Mark
Without whom we'd be in the dark
About an awful lot of things
Relating to the King of kings.

Today I worshipped at a local St Mark's, in Highcliffe, where I confirmed yesterday.
Have a very happy St Mark's day (transferred).
Posted by Edwin at 11:25 No comments:

The Bishop of Winchester has managed to lose both his Suffragans at the same time, so now he is calling on the halt and the lame... that is to say retired bishops living in the diocese like John Dennis, formerly of St Edmundsbury & Ipswich, and Christopher Herbert, recently retired from St Albans. John, incidentally, is the only bishop who gave me hospitality overnight in his house before I attended a Staff Meeting, back in my time as Richborough. Many Brownie points to him and his dear wife Dorothy. 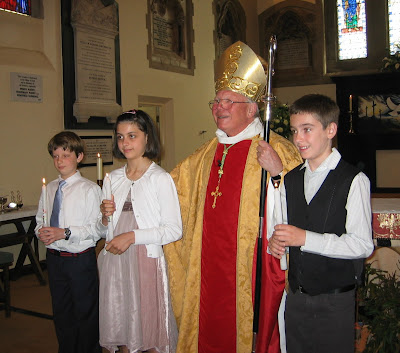 So today I was wheeled out once more, this time to the parish of Highcliffe, just a few miles west of here. Thought you might like to see the three Candidates. Left to right they are Alastair, Charlotte and Michael, carrying the candles with which they lighted our way out of Church.
Because it is Good Shepherd Sunday I spoke about how the Lord knows his own sheep, and calls them by name; a theme which the Confirmation takes up when I say to each of them "Charlotte, Christ has called you by name" .. "Alastair, Christ has called you by name". All of them had a second name which was a saints' name, so I spoke briefly about that, too; Charlotte Elizabeth heard about Elizabeth of Hungary, Alastair John was reminded of the beloved disciple, Michael James did best of all managing both the Archangel and an Apostle!
The parish priest, Fr Garry, had only just made it back through the ash cloud; he had been in Poland, so there was the added problem of the time of mourning for the loss of the President and so many others in the air disaster. The church in Highcliffe is St Mark's, so it is also their Patronal weekend. It was built by the family who rebuilt Highcliffe Castle in the early 19th Century - they also owned Rothesay on the Island of Bute, and Castel Coch and Cardiff Castle were revamped by them. Highcliffe is extraordinary, since they tore down the Georgian mansion and rebuilt using stone from Normandy; not just stone, but the greater part of a Chateau (Les Andelys) and a good part of an Abbey Church [Jumieges].

Now owned by the local authority, it is a favourite spot for secular weddings - or as I prefer to call them, pagan marriage rites.