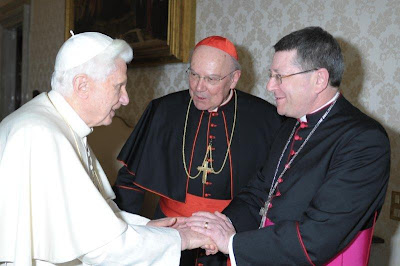 Long-time Catholics have been giving a wonderful welcome to us johnny-come-latelys in the Ordinariate. Just a few have found it difficult, though. Indeed one commented on a posting of mine in the Anglo-Catholic blog. Maybe today's Mass reading from Acts 15 can help.

Peter and Barnabas were faced with a group of hard-liners from Judaea who wanted the Church to impose the whole Jewish law on Gentiles converting to Christianity. They had "no small dissension and disputation" with them - so the matter was referred to headquarters, in Jerusalem. There, it was a group of Pharisees who wanted to press the hard line, "to command them to keep the law of Moses". So the Church met in Council, the Apostles and elders together.

Peter reminded them how "God put no difference between us and them, purifying their hearts by faith". It was James, leader of the Church in Jerusalem, who delivered the Council's decision. "My sentence is, that we trouble them not, which from among the Gentiles are turned to God". 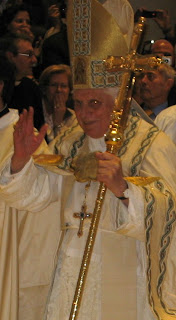 That same generous spirit has worked in Benedict as it did in Peter and the first Apostles. There may be some who think it improper that former Anglicans had only Lent for a eucharistic fast, or that former Anglican priests are put on a fast track - just six months from leaving the Church of England to Ordination as Catholic priests. In that time, though, they have undergone rigorous assessment, and have begun a course of training to 'make up that which is lacking' in their former priestly formation. It is undoubtedly generous of the Holy Father, to receive us in this way. Some would assert it is a risky procedure. But the Pope is willing to trust the Holy Spirit - and refuses to 'put a yoke upon the neck of the disciples' (note the word which Peter uses of the new Christians) 'which neither we nor our fathers were able to bear').

If this fails to persuade you, then perhaps you might continue from the first reading for today, to the Gospel?
Posted by Edwin at 10:34 No comments: