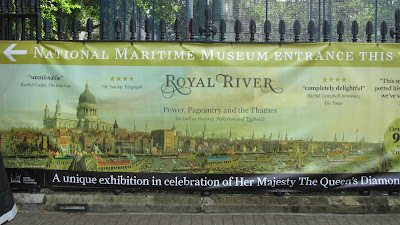 For a birthday treat, la Masignora chose a visit to London, with an exhibition at the Maritime Museum in Greenwich its focal point. If you are able to get there, do. It's only on for a few more weeks. It is just marvellous, leading us through time from the Tudors to the present day and showing how each generation had its favourite home on the river, from Windsor in the west to Greenwich in the east. The greatest palace builder of them all was Henry VIII, and a recent commentator said he had contributed more to English Architecture than any other monarch - without also saying that he had destroyed some of the greatest buildings in the land, including Fountains Abbey and the other great Monastic Houses in the North and so many other wonderful buildings. In Oxford work on Christchurch ceased under Henry, and the planned Cathedral was abandoned; all Henry left that poor diocese was a shorn off fragment of a Nuns' church which also has to serve as a college chapel. But more of that another day, perhaps.

The curator of this exhibition (the "Guest Curator" he is called) is the historian David Starkey. Perhaps it only strikes a member of the Ordinariate just how many of those connected with the River were Catholics, from Henry VII and Cardinal Wolsey to Pugin whose crockets and finials make the Palace of Westminster so memorable. 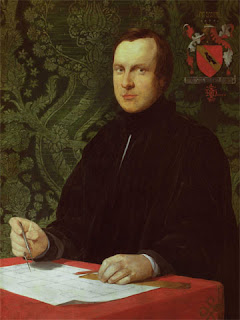 For Pugin it was his faith which inspired his architecture. Few people have had such an effect on English buildings, from the Houses of Parliament to parish churches, railway stations, Civic Halls - every 'gothic' building from the 19th Century to the present owes something to Augustus Welby Northmore Pugin.

There were some marvellous juxtapositions. The stern of the 'Royal Prince' is on display in England for the first time since the dastardly Dutch made off with her. Nearby stands a portrait of Charles II's brother James, depicting his Naval prowess; he led the fleet which defeated the Dutch at the battle of Sole Bay. Then it is up river again to Hampton Court, with the additions to Wolsey's great Palace (appropriated by Henry VIII of unhappy memory) made by William and Mary. 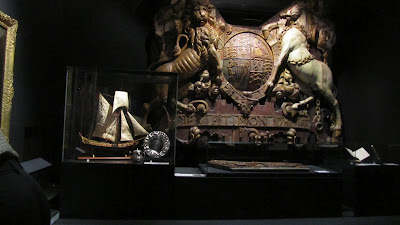 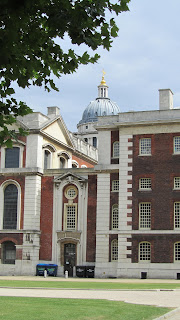 So next to the last Stuart King is the unspeakable William of Orange. He might at least have asked his fellow countryment to have returned the 'Royal Prince'! Little is said about the very last Stuart monarch, Queen Anne, who was such a benefactor of the Church of England. Yet she is famously associated with Hampton Court by Pope (not THE Pope; the other one, the English poet.) "Close by those Meads for ever crown'd with Flow'rs, Where Thames with Pride surveys his rising Tow'rs, There stands a Structure of Majestick Frame, Which from the neighb'ring Hampton takes its Name. Here Britain's Statesmen oft the Fall foredoom Of Foreign Tyrants, and of Nymphs at home; Here Thou, great Anna! whom three Realms obey, Dost sometimes Counsel take--and sometimes Tea." (Alexander Pope: the Rape of the Lock.) Wren began builsing the Royal Naval Hospital (site of the present Museum) in Mary Stuart's reign, and it was being built throughout Anne's reign, only completed under George I (and the Chapel finished even later).

There is much in the exhibition about the Hannoverians, with their fondness for domesticity at Kew - it was the retreat where Royal Princes could escape their fathers. All the 18th Century Georges, it seems hated their sons, who reciprocated enthusiastically.
It is ironic that this exhibition, created to mark the Queen' Jubilee, should also have so much about successive Royal Yachts. The Victorian Yachts had the most splendid fitiings and furnishings, the very last of the line, Britannia, was a favourite of our present Queen and the Duke of Edinburgh. Had the yacht remained in service until the present day, it is unthinkable that there would not have been a replacement. The mean-spirited decision to decommission and not replace her in 1997 is unlikely to be reversed (despite promises to do so by various Conservative leaders) in 'the present financial climate' - excuse for so many unfulfilled Government promises. 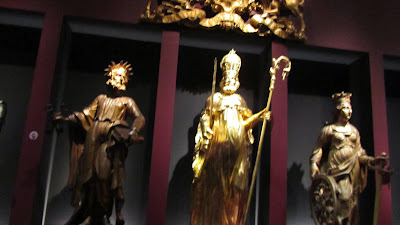 For me an outstanding feature of the exhibition was the Lord Mayor's Procession. Until 1857 this was a great River Spectacle; all the Livery Companies had their own barges, with uniformed crews vying with each other. Now the Lord Mayor's Show is all on dry land, and a poor substitute for those great waterborne events. Many of the livery companies have surviving relics of their barges; and amazingly several of them had figures of their patron saints. To carry an image in procession now would certainly give rise to charges of "Popery" - yet from well before the Reformation right until the reign of Victoria life-size images of many saints were processed along the Thames to escort the Lord Mayor. Above you may see Peter, of the Fishmongers' Barge, the gilded St Dunstan of the Goldsmiths, and Catherine of Alexandria, of the Haberdashers' Company. Will there be a Lord Mayor who will reinstate the Saints in his Lord Mayor's Show?

IF YOUR EMAIL IS IN MY ADDRESS BOOK IT IS LIKELY YOU WILL HAVE RECEIVED A SPAM MESSAGE ABOUT CHRISTMAS GIFTS; I fear the address book has been hacked. Is there anyone who can advise me on what to do about it? Or shall I have to find another Server and start all over again... HELP!