I will consider thy heavens 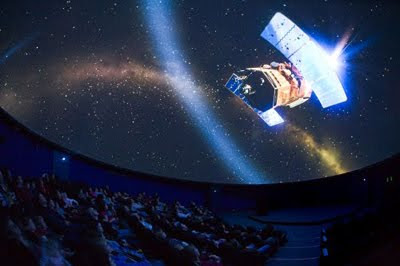 A grandson is a great excuse for going to places where you'd not go alone; such as a planetarium. So we went with Huw (aged 9.8) to Intech, just outside Winchester. The place was heaving with kids on halfterm, struggling to get at the various hands-on experiences but being shoved aside by their fathers. The Planetarium shows were heavily booked, but we managed to get into the one about Black Holes.

If you thought Theology was difficult, you should try Black Holes. There were brave simulations of what it might be like to approach one - canoeists trapped in the approach to Victoria Falls and so on - and there was a great deal of "we are now certain that", which made me very dubious about the 'findings' of science. It was interesting, though, to see attempts at describing how space is warped, and a black hole pierces though it, and there time and space are dramatically altered. But why, when they will accept all this, are modern human beings so resistant to ideas like heaven and eternity?

Walsingham has done a great deal about engaging children; perhaps the cathedrals should do more. It is a huge moneyspinner, after all. Though perhaps theology, Queen of the Sciences, is no longer at the stage where anyone dares say "we are now certain" of anything.
Posted by Edwin at 10:03 No comments: 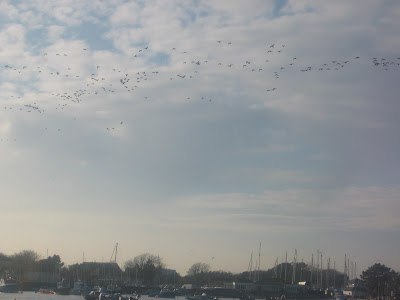 Groups of birds, that is to say - or if not Fr Hunwicke will swiftly correct me... at any rate, they were there in their thousands, down on the marshes today. Geese flying in huge flocks, turnstones and curlews and redshanks busying themselves by the edge of the water. Many seemed agitated; some gulls were mobbing a lone swan, until it stood on its tail and flapped its great wings at them. 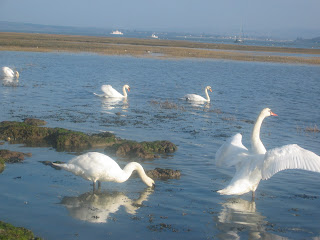 It is the time for discerning their future, deciding where the best spot might be for bringing up their young, keeping an eye open for predators. All of which seemed somehow a parable for another group... Anglicano 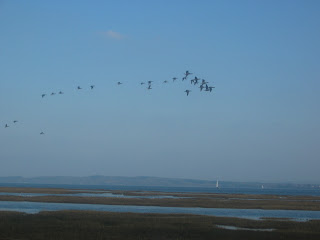 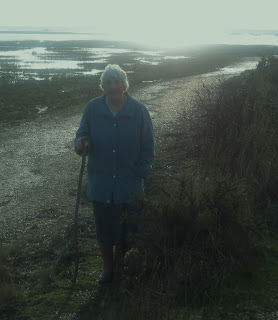 Despite these musings, the weather was bright if pretty chilly still, and a good walk was called for after the Ash Wednesday Mass in All Saints', Lymington.
That is a shared church with the Methodists. If they unite, as is rumoured, perhaps All Saints will not be needed by either congregation... it would scrub up wonderfully as an Ordinariate church - but not a word to the Vicar.
Posted by Edwin at 21:21 1 comment:

In his Mary Magdalene blog, Fr Ray Blake is writing about the Ad Limina visit of the Irish bishops:-

"The great problem seems to be the feudal structure, that makes a Bishop Lord of all [he] surveys linked to an unaccountable oligarchy of the Episcopal Conference. In the past when the Episcopal Conference structure was weaker, the Bishop was directly accountable to the anvil of the senior clergy of his diocese on the one hand and the hammer of the Roman Curia on the other."

Now as I read Anglicanorum Coetibus, former Anglican bishops joining the Ordinariate will be members of the Episcopal Conference of England and Wales. Those who take this step are likely to be bishops who have lived under the constraints of the Act of Synod - that is, who have been Provincial Episcopal Bishops. These are men who have had no authority of their own, only such as has been lent them by an Archbishop and other diocesan bishops. They have had no great team of archdeacons, advisers, PRs and Secretaries protecting them. Above all, their office has involved them in pastoral and sacramental care, their only 'power' having been that which priests and people have been prepared to give them - such priests and people having had first to ask their Diocesan Bishop to provide a PEV for them.

Is it conceivable that this is an element of the Patrimony of Anglicanism which might be of value to the whole Church?
Posted by Edwin at 11:39 No comments:

An unusually relaxed Sunday today; I just said the 8o'clock 1662 approx (with mini sermon) in Lymington, then off we went on the first picnic of the season. Kingston Lacey is a favourite spot - the former home of the Bankes family, left to the National Trust when the last heir died. 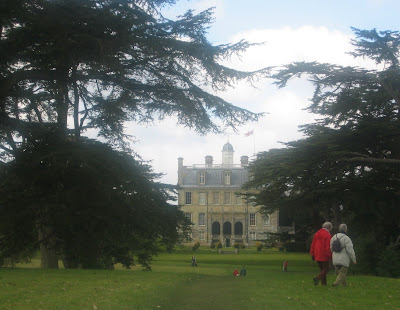 The estate included Corfe Castle, where Lady Bankes had held out against the Roundheads until they starved her out. As she rode out, it is said the Parliamentary troops averted their eyes. 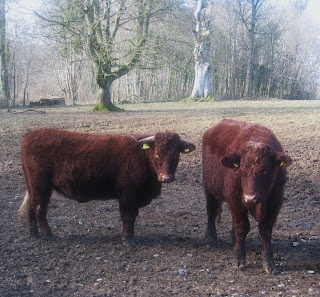 The National Trust herded us through the woodland walks today- vast throngs of us, all to see the snowdrops! But it was a lovely day, if a bit chilly whenever the sun went in. 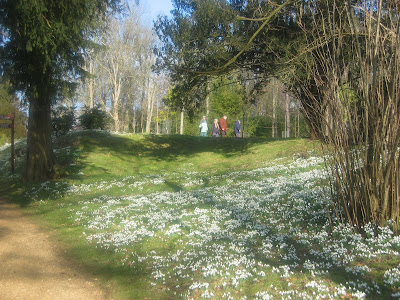 So, nothing earthshattering to blog about, just one or two jolly pictures to share; of the House, some of the Devon Red cattle, some snowdrops and a magnificent tree. Relax! Enjoy! 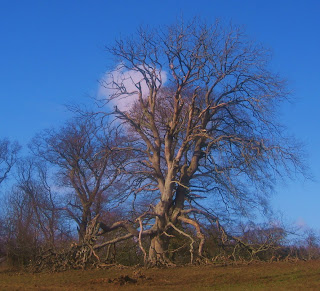