SWISH of the Curtain

r since the Society Model was announced, there has been something nagging in the back of my mind about acting. Something on TV maybe? No, now I have it. There was a serialised radio play on the BBC called "The Swish of the Curtain". According to the Beeb, who revived it as recently as 2007, it was an 'astonishing story' ..'Pamela Brown's 1940s tale of stage-struck children who start their own theatre company'. It even gave rise to a Theatre School in Bournemouth - their logo appears above, I hope they are glad of the publicity.
So there we have it: Our Lord spoke about "children in the market place saying 'we piped for you and you would not dance'". Neither John the Baptist nor Our Lord himself could satisfy them. Now there's another little group, a 'society' which wants us all to play their game.
Fr Hunwicke has posted a devastating account of where this Society Model has come from - a product of the dream-world of Chichester. Perhaps, though, there is also about it something of 'The Swish of the Curtain'; stage-struck children, setting up their own company. Of course we wish them well; but I fear it is going to end in tears when the theatre management tells them their little show is not going to appear. It will be patronised for a while by those who would use it to undermine Anglicanorum Coetibus; but it will not be allowed to have any independence, any jurisdiction. Just patronised. Still, children grow up, and eventually they will be looking for a more authentic and enduring company. The longest-running show on earth has an opening for them - the Ordinariate will always be there to welcome them.
Posted by Edwin at 10:40 7 comments:

Recycling on a Grand Scale 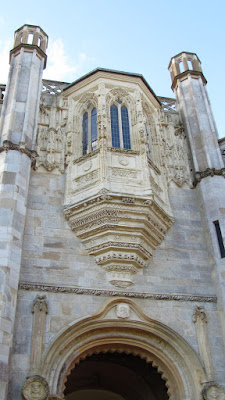 'The times are too sensitive; just blog about Gardens and Stately Homes'. I always listen to PEVs, so in obedience here is just such a piece: about Highcliffe Castle. I have mentioned it before in a blog, but it is worth revisiting. 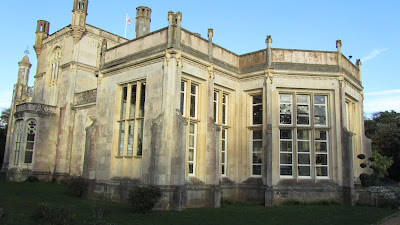 After the French Revolution, some great churches (like Cluny) were simply blown up in order to cart away the materials. Equally, some grand houses were just left to rot. This was a great opportunity for English Milords to cash in; and few did it better than Lord Stuart de Rothesay. Starting in 1831 he had many tons of stone shipped over to England from Normandy, chiefly from the Abbey of Jumieges and the Chateau of Les Andelys. His architect, William Donthorne, pieced them together and made a magical palace on the cliffs to the east of Christchurch.

Royals were entertained there, her Ladyship had a parish church built just over the road in the best Anglo-Catholic taste, and for almost a century it was a jewel in the crown of SW Hampshire, rivalling Highclere in the north of the county (as seen on TV as "Donwton Abbey"). The interiors too were reputedly of great splendour, with plasterwork and boiseries, and an amazing window for the entrance hall (taken from a church in Rouen). That hall was dominated by a grand stone staircase. 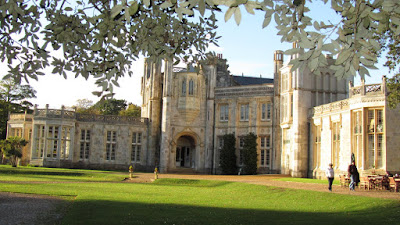 By the end of the second World War, even the Rothesays could not afford the upkeep. Theirs was a branch of the family which had rebuilt Cardiff Castle, created the folly of Castel Coch, and had as their principal residence Rothesay Castle on the Isle of Bute. Coal and Slate had kept them wealthy, but death duties and the war reduced their state.

In 1949 the contents of Highcliffe were sold, and the house itself became first a children's home, and then a seminary for Claretines. These religious clearly needed to keep their aspirants busy, for they demolished the stone staircase to rebuild it as a path down the cliffs to the sea. The hall thus emptied became their chapel. They did not stay long, the house fell into decay, there were fires which destroyed most of the interiors and eventually, when it was almost too late, Dorset County Council purchased the house and began to restore it (for the County Boundary had shifted, and Highcliffe was no longer in Hants). 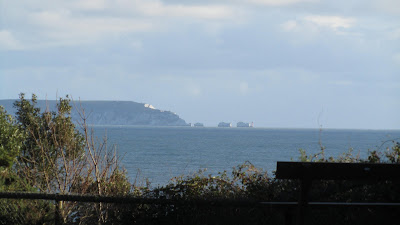 The Needles from the Garden Front
Now it is mostly used for exhibitions and 'civil ceremonies' (aka pagan weddings). The great window has survived, though it is set above the main entrance which faces north, so the spectacular fifteenth century glass is never seen with the sun shining through it. Curious, that parts of a once-great Abbey should have come to this. It is still worth a visit - worth a detour, even.

I am attaching a few pictures - the one above is the stone frieze over the garden entrance. Perhaps another blogger from Oxford will render it into an elegant Georgian couplet. I think it's something about how pleasant it is to stand here on dry land and watch as a gale batters shipping onto the Needles .. well, not quite that, but certainly there's a bit of schadenfeude about it. Perhaps it will be a motto for those of us who escape into the Ordinariate while watching the struggles of remaining anglo-catholics from afar. I think not, though; for in reality we shall still sympathise with them, and pray for them, and hope they will not leave it too long before recognising that alia jacta est - or, as someone once said, the game is up.
Posted by Edwin at 14:27 1 comment:

Tomorrow, November 9th, is the seventh Anniversary of the death of the first and greatest of the Canterbury PEVs, John Richards. I still miss his fatherly advice in that gravelly voice down the phone "Now then, Edwin, what you want to do is ...." - and the advice was always right! Pray for the repose of his soul, please; and for his family, and those to whom he ministered. Requiescat.
Posted by Edwin at 10:43 No comments:

Lift Up Your Hearts 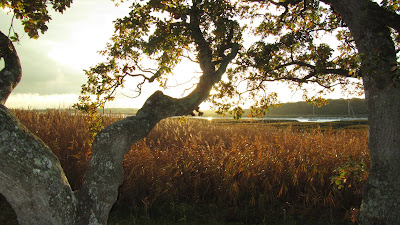 The Golden Evening Brightens in the West

Somehow I felt we all needed a bitof a lift; so here are some pictures from Exbury . 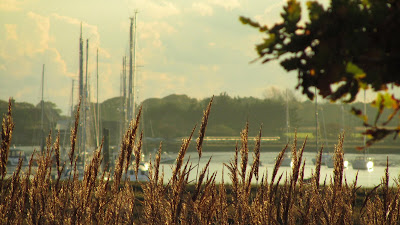 Today was the last day of its summer season (there will be a few Santa Specials on their lovely little railway before Christmas). 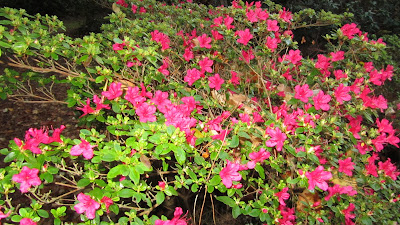 So here are a few pictures showing autumn and encroaching winter; and a promise of spring to come. 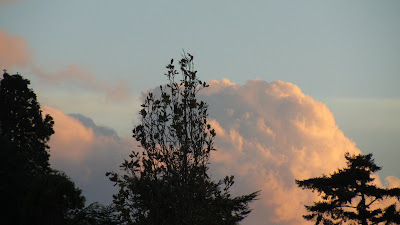