Signs of over-excitement in the blogosphere. Since my last posting it has had over a thousand hits a day - which shows there must be a few people interested in the Ordinariate. Oh, I know Fr Ed will regularly get two thousand hits per diem, but you don't come here looking for controversy. Let's just take Michael Winner's advice in the ads, and calm it.

So today is nice and sober. Some thirty or so, including four clergy, met this afternoon in a Catholic Church just over the Dorset border in Christchurch for our latest session on the Ordinariate. After an Anglican eucharist, celebrated by Fr Brian Copus, Fr Graham Smith was able to give us all news of the Timetable for those seeking to join the Ordinariate. My own experience of the eucharistic fast (before being Received and Chrismated in two weeks' time) was explained, to help some realise just what was meant by not being able to receive Communion throughout Lent. In preparation for all this the Bishop of Portsmouth is calling together members of the various groups exploring the Ordinariate in his diocese. We shall be invited to St John's Catholic Cathedral on Saturday March 12th, when this stage on our journey will be marked liturgically.

The completion of this period of fasting will be on Maundy Thursday, when the Group will be received together into the fulness of Communion in the Catholic Church. Through Lent too those former Anglican priests joining the Ordinariate will undertake a special course at Allen Hall, the Catholic Seminary in Chelsea, as part of their preparation. The five former bishops will participate in this, too.

It is a busy and exciting time. Several at the meeting are planning to be at the Ordination of the three recent PEVs in Westminster next week, and any day now we should know who is to be our Ordinary. To me, this seems like the fulfilment of what the Reformation and the Counter-Reformation both set out to achieve - the renewal of the Faith. This time not through schism but by beginning the work of re-uniting Christ's Church, his Body. I lived through the seond world war (just); these events seem to me every bit as historic. Never has persistent prayer been more necessary.
Posted by Edwin at 18:12 4 comments: 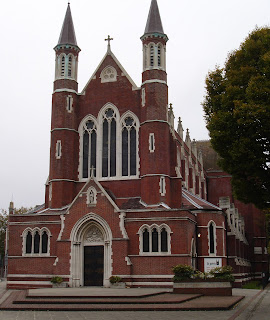 Forgive the punning title, but it does seem to have been a sprint rather than a marathon, heading towards Catholic priesthood. Certainly there has been much grace involved, on the part of the Catholic authorities, from the Holy Father via the Diocesan Bishop and our Parish Priest to the local congregation here. Everyone has done everything possible to smooth our path and make us welcome.

So it is good to be able to announce that the intention is that Jane and I should be received here in Lymington, at the Church of Our Lady and St Joseph, at the 9.30am Mass on January 21st. Bishop Crispian says he will ordain me Deacon in his private chapel on the morning of February 11th, and my ordination to the Priesthood will follow three weeks later at 2.30pm on Saturday March 5th in Portsmouth Catholic Cathedral.

It would be helpful if any Catholic priests who wish to concelebrate in the Cathedral could let me know, so that I can send their names on to the Bishop. But whoever you are reading this blog, please be kind enough to remember Jane and me in your prayers at this exciting and slightly nerve-wracking time.
Posted by Edwin at 14:10 11 comments:

'Sticks and stones may break my bones, but names can never hurt me'; except that they do, sometimes they hurt more than physical wounds. Religious words are constantly taken over and given negative meanings in the secular world. We don't like being told off; so we say we don't want to be preached at; or we find an argument too hard to follow, and we call it theological - the media are especially good at this, when the word they want is theoretical.

There is one word which seems to be used by everyone when writing about the Bishops who are leaving the Anglican Communion. That word is 'defecting'. Now you might expect those who dislike the Catholic Church - the BBC, much of the Press - to delight in such a pejorative term. It is a little surprising, though, to see it in more friendly reporting - the Telegraph uses it, and so does "America; the National Catholic Weekly" and other Catholic journals.

The meaning of the word itself is bad enough; "to fail, fall short, become deficient or wanting, to fall off from (a standard &c)". So the Oxford English Dictionary. The associations of the word, though (like theological and thoretical) are worse. They connect with 'defective' (maybe mentally or morally defective) or having a defect, being faulty.

It may be this is what some people think of those who, for reasons of conscience, can no longer stay in the Church of England, and who are persuaded that the Catholic Church is the home which they seek. It surely is not the way our friends think of us, though? If they need a word to describe our action, I would suggest one which is at least neutral. A good word might be CONVERT. It is neutral, inasmuch as it is used to describe, for instance, changing from one sort of electrical supply to another - from Alternating to Direct Current, maybe, or from 240 to 110 volt supply, or from FM to DAB radio.

It has, too, happier subconscious connections; Conviction , Constant, Conscientious.

In feeling compelled to leave the Church in which I have served for more than fifty years, I am doing so not out of pique. It is with great sadness that I perceive that once-great church to have fallen away from its standards of belief and of morality, and to be taking ever easier options. For instance, once it was not possible for those remarried after divorce to be ordained. Now, that has been changed; and soon (perhaps already, I am not up to speed with the legislation) it will be possible for such people to become bishops in the Church of England.

So I am converting, moving from a church which has to my mind abandoned its catholic principles into one which stands firm. I hope that this action might yet persuade the Church of England to look once more at its foundation documents, and decide that, for example, St Paul's first letter to Timothy, Chapter 3, gives better moral advice to its clergy than decisions of a General Synod. If there has been a "falling off from a standard", that may apply more to the Church of England than to those who, with great sadness, are leaving it.
Posted by Edwin at 17:13 14 comments: