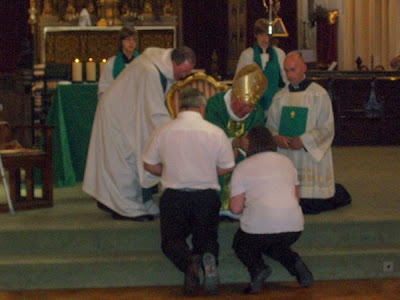 At the Throne (just!)

A few pictures from last weekend's Confirmation at S Martin's have been forwarded, so as promised here is a little memento of that visit. Fr Beau Brandie was heavily handicapped - he really is too old to play rough games, but he'd managed to get a broken ankle, so processions were more than usually dignified. He produced a good number of candidates, though, and a merry time was had by all. I shall let the pictures do the talking - currently I am getting geared up for a Patronal (St James) at S Michael's Croydon (who have James, very cunningly, as their second Feast of Title) - we head off that way tomorrow. 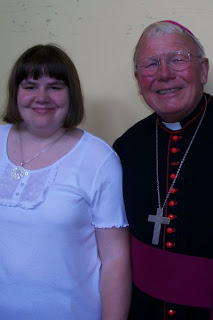 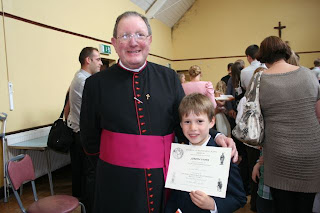 Fr Beau with Trevor: Rachel and me
Posted by Edwin at 13:50 No comments: 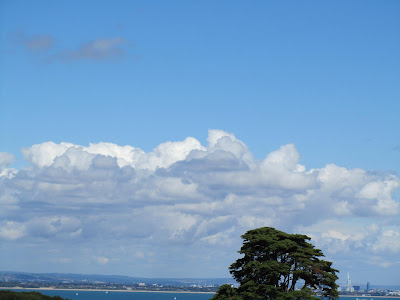 As Synod fades into memory, one emotion remains; grateful thanks that the speculation is ended, and we know we are not wanted. "Oh, but the Archbishop has said ...." Forget it. What the Archbishop said has been ignored, and will be again. "Oh, but the dioceses are to debate the proposals..." To what end? They cannot amend anything, only approve or disapprove; and the certainty is that they will all approve what is before them. "Oh, but the final vote is not for eighteen months, there will be a new Synod, they need a two-thirds majority.." So what! If it were to fail at that hurdle it would come back very swiftly, with even less concessions to traditionalists. No, we have been given a one-way ticket, and the sooner we use it the better. 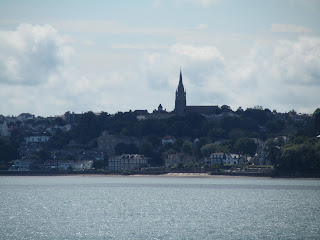 Spire of Ryde All Saints

So yesterday, taking a day out to the Isle of Wight (see the Anglo-Catholic blog) was wonderfully refreshing. Especially seeing All Saints Ryde in the pastoral care of the Bishop of Richborough, and so a constant thorn in the flesh of Portsmouth Diocese plc, standing proud on the skyline. 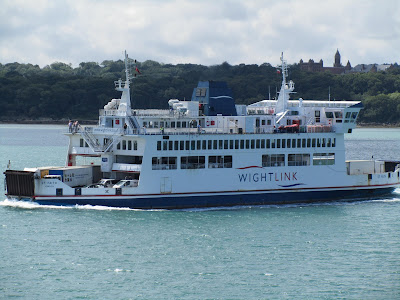 Quarr on the skyline

Then Quarr Abbey, where my former colleague among the college Principals, Dennis Lloyd of Mirfield, took refuge after leaving the C of E. We had a lovely day on the Island, and Osborne is worth a lon 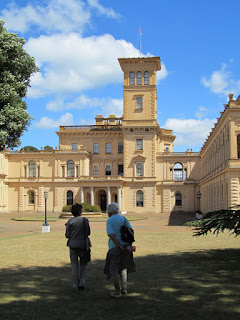 g journey.
English Heritage are doing a great job restoring Osborne house and gardens to their former glory. This is also an excuse to show you some pretty pictures from the Solent in Cowes week. 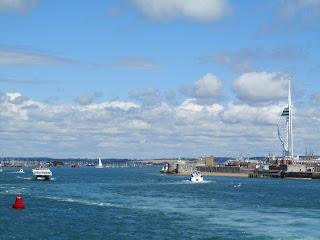 Portsmouth Harbour Entrance, the
Spinnaker on the right


If you have been to Portsmouth lately you can't have missed the Spinnaker Tower. We can glimpse it from Lymington, twenty miles away. Close up you get some impression of its size; the top three floors are glazed [they appear black in the picture above: click on the picture to enlarge it] and way up there you glimpse tiny figures of spectators... terrific. Knocks the Angel of the North into several cocked hats. 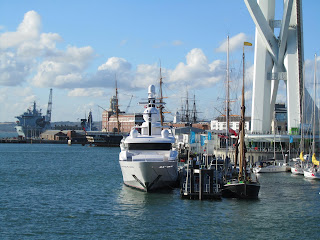 The base of the Spinnaker tower, with the Masts of Nelson's Victory in the distance.

So, this weekend was spent in Brighton. But I shan't blog about it until I get some pictures forwarded; once again I forgot my camera so I wait on others to send me something. Meanwhile, yesterday. It was a trip to the dentist (three fillings and a new denture, since you ask) but en route I had time in hand and headed to the Southampton City Art Gallery.

Southampton as a City is a grave disappointment. Have you ever been to a concert in the Guildhall? Impressive 1930's building, but not a touch of paint since it was built. Went to a BSO concert there and was devastated to find even the conductor's rostrum had peeling paint! So of course there are very few concerts there. The erstwhile Bouremouth Symphony Orchestra (which I knew first when Charles Groves was Conductor, half a century ago) now has its home in Poole where there is a great concert hall, the Lighthouse. Unfortunately, though only 24 miles away from us, it takes an eternity to get there through the hinterland of Bournemouth. There are a few ancient Southampton buildings which the blitz missed and the developers have not yet cleared away, but they are generally closed. There are two things though that redeem the City. The parks, and the Art Gallery. Mind you, they were going to flog off some of the collection in order to renovate the building ... not sure where that one has reached now.

The gardens are marvellous, and very well mainstained, and run through the centre of the city. Yesterday I spotted what I thought might be a cork oak, and it was, Quercus Subur, a fine specimen. These gardens are a great feature - unlike the Solent Coast which ought to be a feature but is generally hidden behind warehouses and piles of freight containers. Well, it is a working port, but it would be nice to be able to get a glimpse of the sea now and again.

The art gallery though. Why hasn't the present exhibition been advertised nationally? Why have there been no major reviews in all the colour supplements? It is just knock-out - I almost missed my dentist's appointment.

It is a maritime exhbition, and is called something like Turner to Today. Of the many treasures (and you should be able to view them on line, but you can't: what is WRONG with this City?!) there is a terrific Maggi Hambling in her Sea series; a great wall of a painting, with a furious array of waves and spume and general fury. Wonderful. There's a nice little Boudin, some so-so Lowrys - his version of the floating bridgeis not a patch on another of a a different floating bridge (on the Isle of Wight) by a local artist - but the show-stopper is the Turner. Fishermen trying to launch a boat into such a sea! Over all, a great looming sky. The notes say there is hope in the sky; I saw it as nothing but foreboding. If you can get to Southampton before early September, then you should. It is free, and when I visited yesteerday morning I was the sole visitor. One other chap came just as I left. Made me quite oblivious of my teeth. Must go back asap and give it more time - I might even look at some of the Videos and Installations!
Oh, and today is my 15th anniversary of Consecration, so we have just split a lovely bottle of Sancerre which Jane bought to celebrate the occasion. Cheers!
Posted by Edwin at 20:52 No comments: