Just over fifty years ago I was ordained deacon ('made' a deacon, we used to say) in Portsmouth Cathedral. Next month I am due to be ordained a Catholic Priest in the other Portsmouth Cathedral. Thought you might like a couple of pictures for comparison: St Thomas of Canterbury, the Anglican Cathedral, was a small and very pretty 13th Century building. Nicholson added a nave in mock Romanesque, and Dean Stancliffe completed the job during his reign with pepperpot turrets. When I was made a deacon there the Box Pews survived They have disappeared, but work continues and, as you see below, they are still beautifying it.... 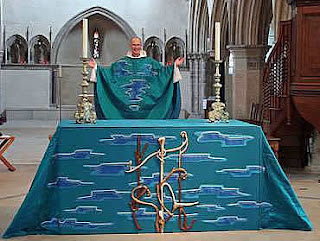 Laudian Cover and vestments provided by the Friends of the Cathedral. 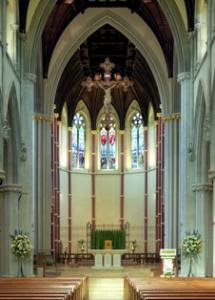 St John's Catholic Cathedral, by contrast, is a 19th Century brick building with timber vaulting. Its interior has been simplified with a design appropriate for the modern liturgy.
This is not a beauty contest so you will not be asked to vote; but I think I shall be very happy indeed to be ordained in St John's (though if everyone comes who says they're coming it could be a bit of a squash on March 5th).
Posted by Edwin at 21:35 8 comments: 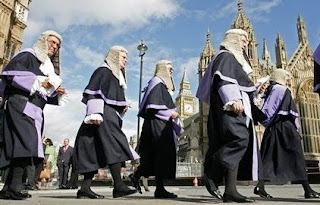 National Apostasy, Keble called it, when Parliament set about abolishing some Irish bishoprics. This is how Pusey House's website explains the effect of that Assize Sermon "... the theme was crucial. Was the Church of England a department of the Hanoverian state, to be governed by the forces of secular politics, or was it an ordinance of God? Were its pastors priests of the Catholic Church (as the Prayer Book insisted) or ministers of a Calvinistic sect?" The history of the Catholic Movement in the Church of England since 1833 has been a long battle trying to ensure that the Church was not simply an arm of the State - not the Conservative Party at Prayer as some have reckoned it, nor an arm of red revolution as others believed after 'Faith in the City', but part of the One, Holy Catholic and Apostolic Church which it proclaimed itself to be.

Now Frank Field and others in Parliament are trying to remake the Church in their own image, insisting that it must conform to the current fashionable belief that women are not just equal to men, but identical and interchangeable with them in every respect. Field begins by welcoming the Church's moves towards ordaining women as Bishops. His motion then says that should the dioceses approve (the question has been sent to them from General Synod) but Synod fail "through a technicality" to pass the measure, it "calls on Her Majesty’s Government to remove any exemptions pertaining to gender under existing equality legislation".

He knows very well that bills can fail in Parliament "through technicalities" - such as being talked out, or failing to win the approval of the Lords. Yet rather than putting his own House in order, he seems determined to interfere in the way the Church conducts its business. The "technicality" which might make a measure fail in Synod is that it does not win adequate support in all three Houses, Bishops, Clergy and Laity. The rumour is that there are now insufficient votes in the House of Laity to pass the measure for women in the episcopate, and so Field an his allies are trying to outflank the Church by removing its protection under the present equality legislation exemptions.

Will he, do you suppose, want this to be extended to Islam? A women-only list for selection as an Imam, perhaps? No. And neither, I imagine, could he succeed in trying to apply it to the Catholic Church. But the CofE is "by law established", and is ultimately under the control of Parliament. So perhaps Keble was wrong all along?

The curious element in all this is that Frank Field was a member of the Ecclesiastical Committe of Parliament in the early 90's. He persuaded that Committee that it must ensure there was proper financial and other provision for those who left the Church of England for Conscience' sake when women were ordained to the priesthood. It was a matter of justice. Surely he must do as much this time? No good saying "you've lived with women as priests; there is no difference with them as bishops". For many, and especially for many Evangelicals, it is very different indeed to have a woman in a position of Headship. Of course, it would be a very costly business indeed to pay them off - not just in cash to be paid out, but even more in the reduction of income from evangelical parishes which pay such huge quotas. It could, indeed, as others have suggested, lead to disestablishment of the Church of England. Perhaps that is what Frank Field and his friends want; but if so it would be better if they said so straight out.
Posted by Edwin at 17:22 2 comments: