The Visit of the Holy Father

How good that it is now confirmed, and that Pope Benedict will be here in Britain later this year. Yet so much of the comment in the media and the blogosphere is about the sexual abuse of children.

Now let's be quite clear, Our Lord gives his sternest warnings to those who harm any of his little ones - 'whoever shall cause one of these little ones that believe on me to stumble, it were better for him if a great millstone were hanged about his neck, and he were cast into the sea'. Priests who abuse anyone in their pastoral care should at once be removed from office; and that happens now, certainly in England, in both the Catholic and Anglican Churches. It was not always so. Both our Churches, at one time, put their emphasis on redemption of the abuser, rather than care for the abused. We have learned our lesson, but meanwhile many innocent children have suffered, and we all need forgiveness for this.

There are, of course, dangers of great injustices in our present attitude. The moment accusations are made against a priest (or a schoolteacher, or a doctor) that person is suspended and the police begin their investigations. If, as happens all too often, the accusations are found to be groundless, the accused may be reinstated; but he may not. There are priests who have been told that since they are in freehold post they cannot be removed; but the bishop will never appoint them to any other position. Others without the freehold have simply been dismissed. The police may say there are no grounds for a prosecution; but the diocesan authorities choose to 'play it safe'. Even if a person is reinstated and his or her record has no black mark, the damage is done. They will still be regarded by many with suspicion since "There's no smoke without fire". Yet they might have been targetted simply because a group of children did not like them, or thought they could make money from false accusations.

Ours is a highly sexualised society. Even young children who once could not reach top-shelf publications can and do easily discover pornography on the internet. The State's answer is to sexualise them even further, by education which goes far beyond the mere 'facts of life', and which takes an excessively liberal approach to all manner of sexual deviancy. Newspapers are ready to accuse the Pope saying he failed to remove a suspected paedophile. They want a sensational story, so they will press their charges even if he had no responsibility for the person concerned, but was Archbishop of another diocese. Yet these same publications pander to our desire for titillation, with advertisements which leave little to the imagination, and print stories full of salacious detail.

But all of us, priests and laypeople, bishops and press pundits, TV producers and absent fathers, have a resonsibility for our children. Government legislates against teachers, forbidding them from consoling hurt children with a hug - then berates them when a child with asthma is not given the proper treatment. Prisoners attack fellow inmates whom they suspect of being child abusers. All of us want to be holier than someone. If it can be 'holier than the Pope', then how self-satisfied we shall be!

We must return to the Gospels. There among the most heinous sins are those of pride and self-satisfaction. "God, be merciful to me, a sinner" is the best prayer for all of us. We who call ourselves Christians should all be praying for Pope Benedict just now. His is an impossibly heavy burden. If people expect more of us than we can deliver, how must it be for him?
Posted by Edwin at 20:41 No comments:

Mercifully quiet day today; the sun is shining, and I'm taking Jane, my wife, out for lunch. She is very pleased with the Mothering Sunday cards from our two offspring. This is the lull before the storm. Somehow in the coming week there are four more sermons to prepare for Holy Week and Easter in Florence (the first is already in the bag) , and one for a Chrism Mass in Scotland. I have put this morning's 8 am mini-bijou-sermonette on 'The Anglo-Catholic' blog - thought the Americans ought to know that some of us, sometimes, use the Prayer Book - or something approximating to it. Today that meant trying to expound St Paul's take on Galatians 4 - from which, of course, we derived Mothering Sunday (aka "Mother's Day" and all that).

Cynthia, who read that first lesson this morning, was called on at a moment's notice - and she had the wrong glasses. Yet she read it most beautifully - but you would expect no less from a gal who was educated by the Wantage Sisters.

There is something we have lost in the present system of three-year readings. The Prayer Book's unchanging Sunday cycle means that you really have to dig into the readings when you preach, and you have to resort to the Epistles as well as the Gospels. That can mean too little Old Testament; but since today Paul is expounding one of the great stories from Genesis, I tried to go with him. Refreshment Sunday is another of today's titles; and for me it was refreshing to try to get to grips with Paul's thought. I hope it was for the congregation, too. 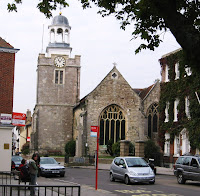 St Thomas the Apostle, Parish Church of Lymington
Posted by Edwin at 10:28 No comments: