A Day in the Unity Octave 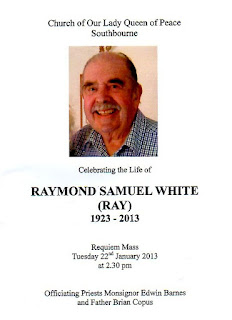 Ray had been the first lay member of the Bournemouth Ordinariate Group: and today he was laid to rest, in our first Ordinariate funeral. He had been head server at St Francis' Bournemouth for many years before entering the Catholic Church, and he had trained generations of servers. Many of them were there today, in the congregation or serving at the Mass.
Fr Brian Copus had been given many anecdotes by the former Vicar of St Francis, now himself a priest of the Ordinariate near Oxford. One story that Fr Paul Berrett had not relayed, though, was told to me in the Church Hall after the Mass. It seems a bishop had come to St Francis' with the intention of celebrating and preaching wearing brown shoes. Ray produced for him a pair of black sanctuary slippers and instructed the prelate that if he was to appear in the sanctuary he had better be properly shod.
In recent years he has been in a nursing home, where we were able to take him the Blessed Sacrament week by week. He will be sorely missed by us all, especially by his daughter Teresa who is a mainstay of our music. She brought together a number of her friends to sing today - a lovely albeit sad occasion, which was a real time of reconciliation for many. Anglicans, Catholics and many others joined to pay tribute to a lovely man. May be rest in peace.