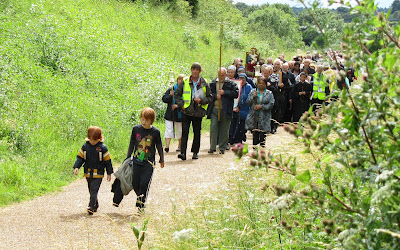 "Come, ye thankful people, Come!" we sang this morning in St Anne's Brockenhurst. On hearing the tune I was a little perturbed. First, it is a very long hymn - but I need not have worried, this was a Catholic congregation so we only sang two verses (is long-winded hymn-singing part of the Anglican Patrimony?) Then, it is a harvest hymn and are there not yet two months and then the harvest? Certainly we saw them reaping some of the early barley in Norfolk on Friday, but all is not yet safely gathered in... I look forward to my figs and apples in a couple of weeks or months, even though the currants and berries are mostly in the freezer. But of course, it was tied to today's Gospel - "Wheat and tares together sown"; somehow "wheat and Darnel together sown" just not does not work, though I daresay Estell M White would have thought it scanned perfectly.

Enough of this. Sufficient to say we were in Norfolk on Friday and yesterday because of the Ordinariate pilgrimage to Walsingham. And though they could get the Combine Harvesters going on Friday, yesterday they certainly could not. Walsingham was wet, very wet; that did not daunt the three or four hundred of the Ordinariate who attended the Mass in the Catholic Shrine, or those who joined the prooession to the Village from the Slipper Chapel, as thousands upon thousands had done from the eleventh Century until the desecration of Holy Places under Henry VIII of unhappy memory in the mid sixteenth Century. Msgr Keith Newton, our Ordinary, had announced that he was to celebrate the Mass of Reconciliation in Walsingham this weekend, so we came together from all parts of his Ordinariate. I know there was a Yorkshire priest there, and so was a Devon priest with his nine progeny - a couple of them were leading the procession - in the photo at the top of this page. 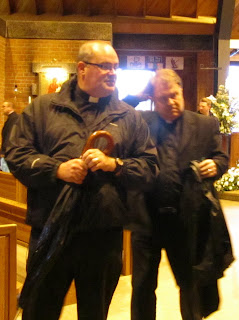 If you want to know about the weather, you can read more about that in my other blog at the Anglo-Catholic. And if you want pictures of the Mass, then the place to go is the Sevenoaks Ordinariate site. Some of the participants turned up a little late; the pair on the left said they were stuck in traffic; I think behind a muck-spreader. No comment is necessary. Here I shall just add a few maundering thoughts, and some pictures from what was a most memorable and happy day.

There were happy meetings with old friends. 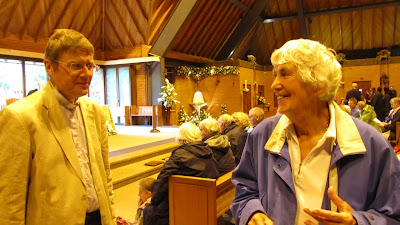 Here my wife and Fr Mark Elliott-Smith were catching up on the news. Forgive the sickly yellow cast; that is thanks to the sodium lighting in the Catholic Shrine Church. And here is part of our Hants and Dorest contingent waiting for Mass to begin (similarly jaundiced). 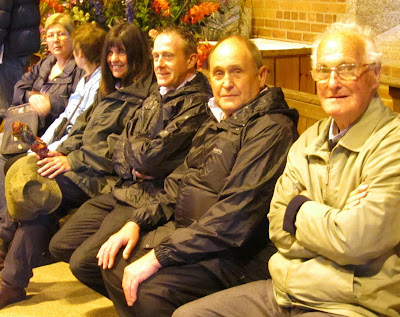 They look a little more healthy in the open air; this [below] is at the Anglican Shrine, where the pilgrimage ended with sprinkling from the holy well, and a joint blessing by Msgr Keith and the Shrine Administrator, Bishop Lindsay Urwin. 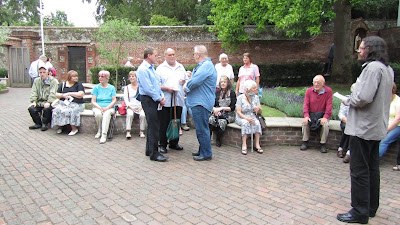 In all the Churches and Shrines there were flowers; it is the 950th anniversary of Richeldis' vision, and the 50th of the fire in the parish church. Here [below] is the seven sacraments font, duly enflamed with flowers. 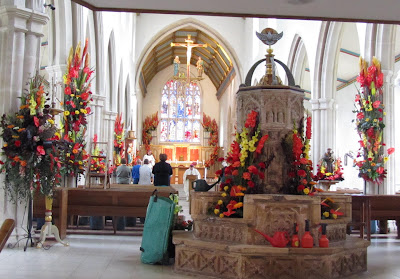 So good, to get the Ordinariate together, in company with other Catholics. We must do this more often - but perhaps for Msgr Keith's sake not in the same week that he flies home from Texas.
Posted by Edwin at 14:38 2 comments: