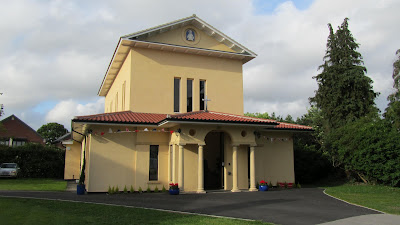 A former parish priest of the Catholic Church in Ringwood used to give directions: "Just look out for the sewage works". Certainly the old church used to look like some public utility - just a flat-topped box which, like all flat-roofed buildings, was prone to constant leaks. 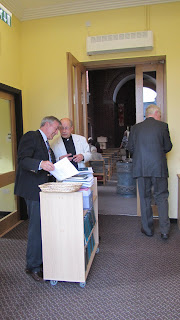 But no more. In his sermon the present parish priest, Fr Anthony Pennicott (left: in the Narthex before Mass) said the introit hymn might well have been "There once was an ugly duckling". You will see from the attached pictures that it is ugly no longer - instead a rather resplendent swan.

My wife and I were invited because the church where our Ordinariate Group worships is in the same Pastoral Area, and the principal celebrant was Fr John Lee, who is co-ordinating Pastor (in Anglican terminology Rural Dean)of the Area. Other concelebrants were Fr Gerry and Fr Vitalis, parish priests in the Area and both from Nigeria. It was good to meet many of the Ringwood Congregation after Mass, and also to meet the Vicar of Ringwood, the Revd Dr David Miell together with his wife who is also in Anglican Holy Orders. I am not sure if I should be flattered or worried that David seemed to know my name already. 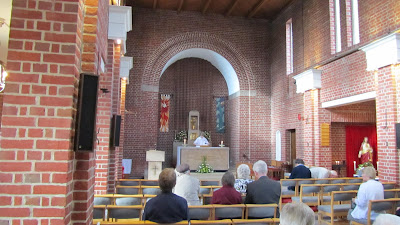 I took the interior photo (above) when people were gathering; by the time Mass started the Church was comfortably full. Afterwards, despite the chilly evening, some of the hardier souls spilled out from the Presbytery onto the lawn. 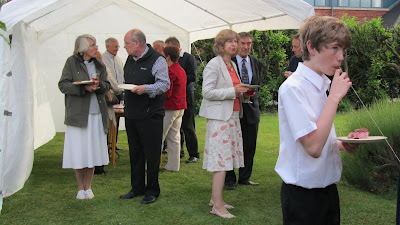 The Architect, Philip Proctor, told me how he tried to give a hint of Italy in the transformed building. He has achieved that, while it looks perfectly at home in its Hampshire setting. Congratulations to all concerned.
Posted by Edwin at 22:24 No comments: 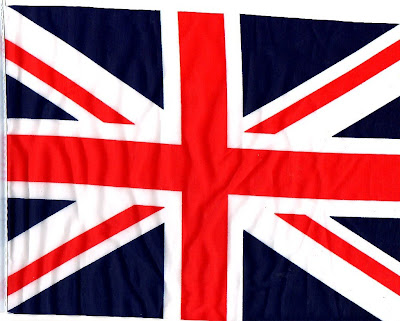 On the day the Queen succeeded her Father as monarch (have I told you George VI died on my 17th birthday?) we were in sombre mood at school assembly; until it came to singing the National Anthem. Very strange singing "God Save the Queen" - and surely it should be "send her victoria, happy and gloria?" Hence the name of this blog. 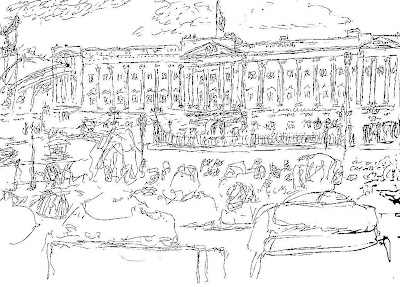 We seldom seem to win anything in tombolas or lotteries, so we put our names into the hat for tickets to the Queen's Jubilee. Imagine our surprise when two tickets arrived just a week ago, anabling us to be present on this final day of the Jubilee weekend. 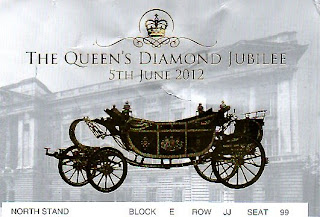 We had to be seated by 9.15am; which entailed a journey to London on the first train of the day, the 6.10 from Brockenhurst. Then by bus to Victoria - a diverted and diverting journey because of the Jubilee, which meant we had a route march before getting into the security queue. Eventually we went under the stands erected outside the Palace (a little like entering the Roman Arena in Verona, we thought, though without the "We about to die salute thee" bit. The performance was certainly every bit as rivetting as Aida. Military bands in all manner of gear, from the overdressed scarlet and gold of the cavalry to the modest and subdued uniforms of the Royal Air Force (did I tell you I was in the Air Force?) 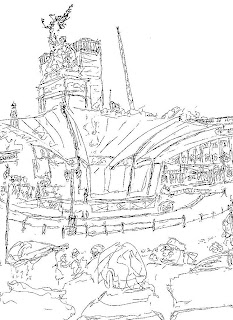 Of course, I managed to forget two things; money (so Jane had to pay for our coffee stops) and the camera. The result is that I was driven to sketching. There were long periods of sitting with only images on the large screen to watch, so there was planty of time for scribbling. The advantage against the camera is that you can give a hint of two events at the same time; so in the last of these images Archbishop Rowan is on the screen on the right (very hastily done - he was only shown for a few moments) and in front of the palace an impression of a few horses and riders - tho' you will have to look very carefully to find them.

We had marvellous seats, in the next-to-top row, just below the box where the Royals had watched last evening's concert. Some of the staging was still there, which will have obscured the view for some. We were luckier, with a clear sight of the entire facade of the Palace. 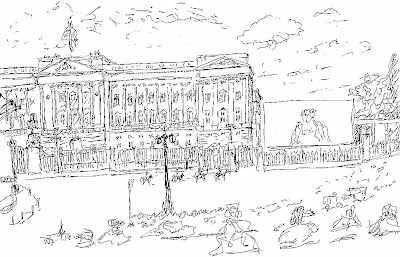 We had watched on earlier days on TV: there really is no substitute for being there. The crowd was enormous, and enormously good humoured. We talked with our neighbours (how un-English, you might think) a Hampshire couplemarried only in March, a lady of uncertain age from Norfolkwho goes off to Australia nexct week. We did not complain when people came back and forth along the row, we cheered everything in sight, from the wonderful black horses of the Cavalry to the ambulances and dust carts which came along in their wake. Best of all, the Queen looked truly happy, with her son and grandsons beside her - to say nothing of her glamorous grand-daughter in law, the lovely Kate.

On previous days there had been rain; we came prepared (no umbrellas, they would spoil the view from the stands) but the rain held off all morning and right until mid-afternoon. There was only one sadness to the day, the absence through illness of HRH the Duke of Edinburgh.

As the Royal Party came back from Westminster Hall to the Palace in open carriages, a few drops began to fall. It was really raining by the time they came onto the balcony, but no-one minded. And the Royal Air Force (did I tell you I was in the Royal Air Force?) put on a marvellous fly-past. Seeing the Lancaster flanked by Spitfires and Hurricanes brought a lump to my throat. I had drawn them in school exercise books when even Princess El;izabeth was only a girl.

The exit took a long while, but again with no complaining, and a cup of tea in Shepherd's Market (a very up-market former village in deepest Mayfair) revived us for the journey home. Forgive this very self-indulgent blog. You really should have been there.
Posted by Edwin at 19:56 4 comments: