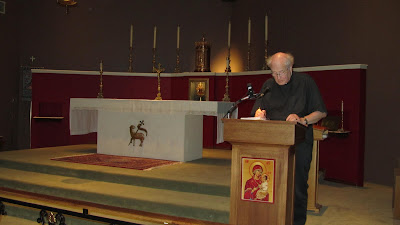 Very big, Texas. And big-hearted too. Just back from a week spent in the Pastoral Provision parish of St Mary the Virgin, Arlington, it might be good to try to hand on a few impressions while they are still fresh (if fresh is the word after a night-flight to Heathrow). (top: Fr Hawkins in his Church before Mass) 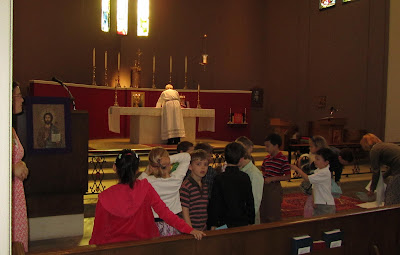 Numbers. Numbers of churches. Drive anywhere in Arlington or Fort Worth or Dallas, and you will run out of fingers for counting the churches. Every sort of denomination, many immense Baptist meeting houses, large Catholic Churches, and in between every sort of God-botherer you can imagine. All seem to be well attended. St Mary's is a former Anglican (Episcopalian) Church which became a Catholic Church when Fr Allan Hawkins and most of his flock were received back in the early '80s. Last Sunday they had around five hundred at one or other of their Masses; and this is a small-ish church. (above: some of the children after Devotions - before the Parish Mass) 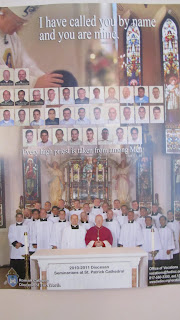 Many Catholic parishes number their congregations in thousands, even tens of thousands. So it was good to find that the Diocese of Fort Worth has a good number of men in training for the priesthood; (left: a poster showing those currently preparing for the Priesthod in Fort Worth) besides many who are waiting to join the Ordinariate from the Episcopal Church, once the American Ordinariate is established. When that happens, the Anglican Use parishes like St Mary's will also be part of the ordinariate. That is a great strength, for it means the new Ordinary will not be starting from scratch; there will be a number of parishes already established and funding themselves, on hand to help those just joining. It is rather different from England, where the Ordinariate is having to rely on long-established Catholic Parishes to come to our help.


And they do have bunfights in Texas - bigtime - after Sunday's Parish Mass
I was given great hospitality by Fr Hawkins, who was a fellow Ordinand with me half a century ago at a theological college called Cuddesdon - no connection with the present institution on that site, "Ripon College, Cuddesdon". His son Giles and daughter-in-law Felice were most generous, too. You might like to see Felice beside a herd of long-horns - less dangerous than the real thing, they are in bronze, recalling how Fort Worth was the end of the trail and a great meat-packing centre for the USA. 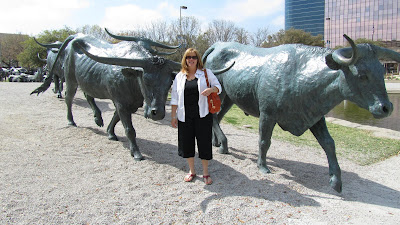 Latterly, oil has become its greatest industry, and there are new rigs being established to bore into the oil-bearing shales which have not been worth exploiting until now. 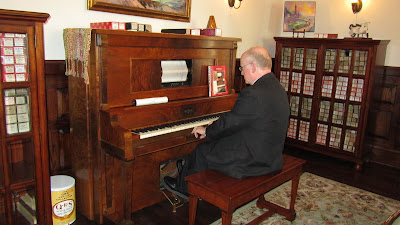 I blogged about him earlier, but here you can see Bishop Kevin Vann of Fort Worth (above)sitting at his player-piano surrounded by cases of piano-rolls. He gave us a lively account of a Gershwin number as played by the composer - and also took us on a tour of his Cathedral (below), which has been re-energised since he became its Diocesan. 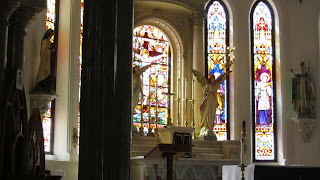 Earlier he had greeted us in a bright green jacket - but then, it was St Patrick's Day. The Pastoral Centre being built (below) is going to be very grand indeed; and Bishop Vann has further plans for further developments on the site which houses Rectory, Cathedral and former Convent School, besides adding spires to the Cathedral and commissioning a new Organ. 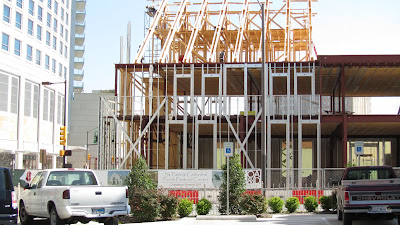 There is no doubt that the Catholic Church is alive and well in Texas; and they are all greatly looking forward to the erection of the Ordinariate for the USA. Pray that it might be soon. 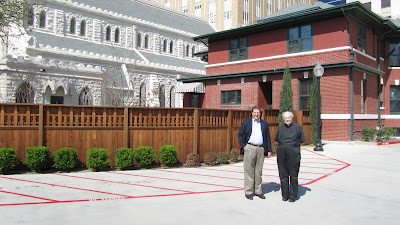 Fr Alan with his son Giles outside Fort Worth Cathedral - the Bishop's House ('The Rectory') on the right.
Posted by Edwin at 19:02 6 comments: