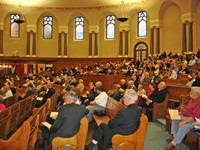 A week from now and the next (last?) Assembly of Forward in Faith will be ended. I guess it cannot be over too soon for the Chairman and his committee. The latest issue of New Directions (mine only arrived today) demonstrates the problem. Geoffrey Kirk writes about our Point of Decision; "If there was any doubt about whose side one should be on in the coming life and death struggle between the Catholic Religion and its Cultured Despisers, the matter is now settled". A few pages earlier and Fr Garry Waddington, recently arrived in Harrogate from Portsmouth, takes the opposite "Northern" view. "Proper Provision is still needed. The Society model might well be the way in which it could with enough support be secured".

There must be many in the Church of England deciding which is the right side of the fence for them. Join SSWSH and hope that an honourable solution may be pulled out of the hat? At the Southern Synod it was the Bishop of Plymouth who attempted this conjuring trick - to the obvious embarrassment of the southern PEVs. In the north, it seems it was the PEV himself, Bishop Martyn of Beverley - and at that meeting the Ordinariate was clearly not encouraged.

Fr Waddington asserts that 'whilst the Church of England still holds marks of Catholicity there is a future for us'. I had always assumed the marks of Catholicity were four: that the Church was One, Holy, Universal (catholic) and Apostolic. What marks will be left when there are women bishops? An interchangeable ministry? Only if catholics agree that women bishops are according to the Will of God. 'High Mass' and incense here and there? Nothing but a well dressed corpse. SSWSH is to be a 'corporate body for clergy and laity gathered around faithful bishops'. Fine for this generation; but what after that? We were concerned to provide a catholic solution for our children and grandchildren. Who will give us the faithful bishops we need?

New Directions continues this month with the same Punch and Judy show; one article (Matthew Chinery's "Oh no you can't") balanced against the Statement on behalf of "a group of Catholic Bishops" headed 'To Protect and Preserve Anglican Tradition'. Their concern, it seems is to help Anglicans "who do not accept (the ministry of the Pope) or would want to see that ministry in different ways". They are wanting to help "those who cannot accept the innovations proposed in legislation and who are hurt and frustrated by General Synod..."

Well of course none of us likes what General Synod is doing. But is a Society however large likely to divert Synod from its path? The juggernaut is rolling; better get out of its way. Oh, of course, we have misgivings about the Pope! How much better if he were to be more like Rowan, ready for Synods to over-rule him. They want to see the Papal Office "in different ways"? Then they had better show us just what ways they might be which could still preserve the Church's unity.

Then in New Directions something I never expected to see; an Editorial which reads like something from the Church Times; "on the one hand - and on the other". Clearly the Editor himself finds it difficult to commend SSWSH, just as the Northern Synod found it hard to commend the Ordinariate. He does his best though, and concludes "We wish them well in their task". Maybe that is all we can hope from the Assembly: a gentlemanly agreement to follow our separate ways.

If I had not already paid for the train fare, I might have given Friday and Saturday at the Emmanuel Centre a miss. As it is, I shall grit my teeth and try, at least, to enjoy catching up with a few old friends. I do not have much expectation of learning how the Bishops of Plymouth and Beverley and their colleagues are going to achieve what we all want, a Province with the capacity for providing a succession of bishops and priests to care for Catholics who 'cannot yet accept the Pope's offer'. They have a resonsibility to tell us, for A CODE OF PRACTICE WILL NOT DO!
Posted by Edwin at 21:17 3 comments: 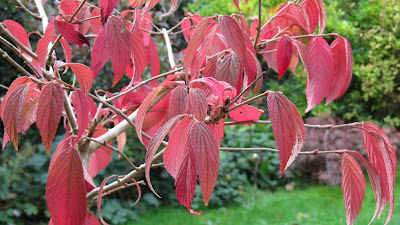 Signs of the Fall

Americans call this Season "The Fall". How especially appropriate that seems this year. Curiously, though as a retired bishop I have no vote, I was sent some of the addresses by would-be synodspersons. They will all be anxiously waiting on the result of the General Synod elections. For me, I fear (as someone said of Parliamentary elections) it is just "One lot of sinners out; another lot of sinners in". The sinners on Synod, though, have a very tedious time ahead.


On one hand there is the monstrous regimen, champing at the bit, wanting to see which of them will be first past the post in the Episcopessa Stakes. On the other, the far smaller group (and, I expect, much diminished even since 2005) of 'traditionalists' doing their utmost to win some concessions for those opposed to women's consecration.


Neither party will have had much cheer from the announcement of the Revision Committee on the Legislation. There are some of those eight appointed members about whom I know nothing at all - but even from those I do know it is clear that the liberal ascendancy has the majority. So that might encourage WATCH and its friends. The timetable, though, can only annoy them. "The expectation is that the House will bring a draft of the code to Synod in February 2012". The House is, of course, the House of Bishops. It is their Standing Committee which set up the working group, and that working group is expected to "conclude its report for the House (of Bishops) by next autumn, having consulted the House and the legislative Steering Committee first". 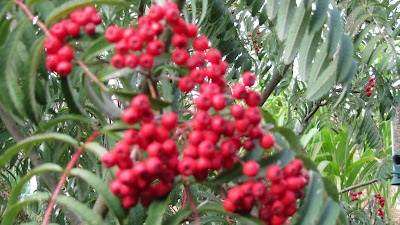 Rowan in the Fall
For six years I had the joy of attending (but not voting at) meetings of the House of Bishops. The Agenda was always overpacked, and discussion, even of the most serious matters, often cursory. So this new working group will have to meet, get to know one another, look at previous reports and see why they were rejected, discover their terms of reference, begin to make suggestions, go to the House of Bishops and ask them to comment, wait for the response, make a stab at a draft, get the legislative Steering Committee to look at it, redraft it in the light of what the Steering Committee said and the House of Bishops and (provided they have not been simply told "go back and do it again") produce the rabbit from the hat "by next Autumn". A busy twelve months for those three Bishops (Ed & Ips, Coventry and Whitby) two archdeacons (Christine Hardman of Lewisham and Greenwich, and Jane Sinclair of Stow and Lindsey) one parish clergyman and two unordained ladies.


Assuming this is achieved, "the expectation is that the House (of Bishops) will bring a draft code to Synod in February 2012 - though the final version of the code cannot be drawn up by the House and approved by Synod until the legislation itself has received Royal Assent - which cannot in practice be before 2013".


I suppose that is because Royal Assent will only be given once the Ecclesiastical Committe of Parliament has looked at the legislation, and determined whether it is satisfied with the draft statutory code of practice. Last time round, in '92, it was not. It might not satisfy them this time, either, but for quite different reasons. Whereas last time Parliament wanted to put in safeguards for those unable to accept women's ordination, now the reverse might be true; they could well say that in view of equal opportunities legislation &c, there should be NO permission for any priest to refuse the ministrations of a woman bishop. They might then demand of the church a single clause measure, without any safeguards.


Yet many, I guess, will be hanging on in the C of E by their fingertips during all that time, desperate that something will be done which will make it possible for them to remain. For me, and I suspect many others, this is the culmination of what began with Keble's 1833 Assize Sermon. He started there the movement to free the Church from the power of the State; to enable it to become truly a part of the One, Holy Catholic and Apostolic Church of Our Lord Jesus Christ. Now, the battle is all but ended, with the Church rolling over and assenting to every new wind of doctrine, based not on Revelation but on Rights: the rights of women, gay and transgendered rights, the right to end one's life. What a blessing is the Ordinariate!

This Isle is full of Noises 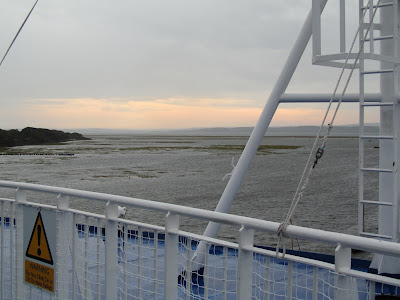 A day spent overseas. We were on the 8.55 ferry from Lymington to Yarmouth, IoW, heading for St Michael's, Swanmore. Until a few months ago it was looked after by Fr Malcolm Jones. Now he has retired to a House for Duty post at Holy Trinity Winchester, so priests on the Island are looking after them most of the time. 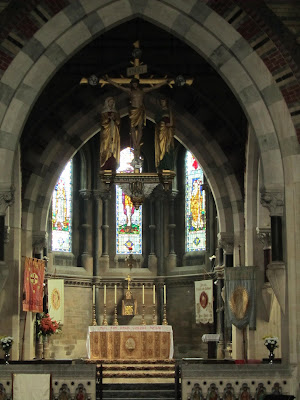 
The day started out very dismal, low cloud and little white caps on the waves during the crossing. The day itself, though, proved far from gloomy. They were celebrating their patronal festival, a litle group of singers had been imported to enliven the occasion, and we had a very jolly time indeed. I preached about the folly of calling someone (like the late Princess of Wales) "an angel". We are at present 'a little lower than the angels'; but in the fulness of time, our destiny is greater than theirs; not disembodied spirits, but the sons and daughters of God, come to full maturity in the Kingdom of Heaven. 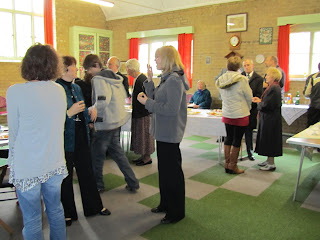 
After Mass there was a wonderful buffet lunch - hardly a bun-fight, for there was so much food that no-one needed to fight for it - and a chance to talk to people. It was wonderful to find them so gung-ho for the Ordinariate. It may be, of course, because they have a number of 'third resolution' parishes on the Island. All Saints Ryde is a strong member church of Forward in Faith; but there are others, too. We called on old friends in Cowes, Ryde and Godshill, and everywhere they were speaking enthusiastically about the Ordinariate. This may be because there has been good clerical leadership. Even today, I heard, one of the Island Churches was distributing printed material about the Ordinariate after the morning service.

So we should be calling on Michael and all the Holy Angels to strengthen us as we put on the whole armour of faith to withstand the temptations of the world, the flesh and the devil; and even to resist the siren voices which would try to lure us onto the rocks of half-heartedness and Anglican fudge.
Posted by Edwin at 19:27 No comments: