Where's that Patrimony, then?

The Society of St Vincent de Paul{SVP}in Winchester invited me to speak to them about the Ordinariate and how we see it from the inside. My address to them was rather long, so it had better make up two posts, Here is Part I - and I'd be grateful for comments, especially from fellow Ordinarians. It is the first time in six months that I have really tried to wrestle with the notion of Patrimony. We met in the Milner Hall, which began life as the first Catholic Church in England to be consecrated after the Reformation. Now this splendid church (below) is its replacement, standing almost next door to its predecessor. 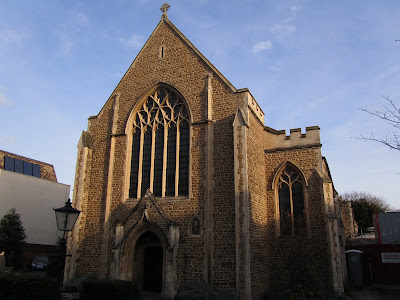 The Ordinariate and Anglican Patrimony

There is a little group of former Anglicans who worship in the Church of Our Lady Queen of Peace and Blessed Margaret Pole. As with all such Groups, and there are now dozens up and down the country, there is a constant struggle to maintain our identity, and yet be clearly a true part of the Catholic Church. When the Holy Father, only two years since, produced “Anglicanorum Coetibus”, and startled the ecumenical world, there were two things the documents stressed.

One was that this was for GROUPS of Anglicans; that is what Anglicanorum Coetibus means. Some of us were meeting this week at Allen Hall, as part of our ongoing formation as Catholic priests. We spoke about the different situations from which we came; and found that no two were exactly similar. At one extreme was a strong Group in Kent, which represented almost the entire congregation of a local Anglican church. They and their Vicar had sought admission to the Church in one body, and the Catholic diocese had offered them the use of a small building a few miles out of town which had been no more than a Mass Centre for a larger town church. This group has become so established, and has built up such good relations with the Catholics they were joining, that it is likely the former Anglican Vicar will become the Parish Priest of a new parish based on that little mission building.

At the other end of the spectrum was a priest who had joined the Catholic Church with only a handful of parishioners. Another local Vicar had brought more of his people with him, so all the former Anglicans were put into one Group, and the priest with the handful was left without any. He was asked to go to a Catholic church a few miles away to minister to the existing congregation. To his delight, though, he has begun to find there are local ex-Anglicans worshipping with him. They had been travelling many miles to an Ordinariate Group – though only eight or ten at present, they look forward to building their numbers and so gaining some group identity.

Our three Groups in this diocese also differ from each other. On the Isle of Wight the core members came from one Anglican Church with their Vicar, and gradually others in the Island are joining them. There are, though, a few Ordinariate Catholics on the Portsmouth mainland. They are worshipping with existing Catholic parishes, and only occasionally does the priest come over from the Island, with a number of his people, and celebrate with them. In Reading, it is a former Vicar with a small number who join him for Mass at a local Catholic Church; and he is earning his keep by teaching at the Oratory School. In Bournemouth, no Vicar has yet relinquished his living. There have been, though, three of us who were retired, and between us we have gathered a group from a number of different parishes around the area. We worship on Sunday and Wednesday at Our Lady Queen of Peace. One of the priests has lately moved on, and another is awaiting his Catholic ordination, so I am holding the fort in the meanwhile, though I retired as an Anglican Bishop ten years ago.

The second thing the Holy Father was seeking was an injection of some of the best of Anglicanism, what he called our Patrimony, into the Catholic Church. But what are the distinctive marks of our Anglican heritage that we bring with us, that Patrimony of which the Holy Father spoke? Some Catholics, I know, have been a little suspicious of us. They had heard other Anglicans call us backwoodsmen, old fashioned Christians who were frightened of women and wanted nothing but the security of the language of the 17th Century Prayer Book. If that had described us you would have been right to be worried. We opposed the Ordination of women to the priesthood, certainly, but that was on ecumenical grounds. It was putting up an insuperable barrier between Anglicans and both the Catholic and Orthodox churches, without any basis for it in Scripture or the Tradition. We believed it was not a matter to be resolved by just one tiny fragment of the Universal Church. What’s more, for most of us the old Prayer Book with its THEEs and THOUs is more a historic document than a source of current worship – though it must be said that Thomas Cranmer translated Latin Collects far better than the authors of the now superseded English Version of the Latin Missal.

So if those are not the matters that we want to preserve, what is this mysterious Patrimony? The Holy Father seems to have great admiration for the English Tradition of church music, especially Choral Evensong. Some of our Groups are trying to maintain a little of that with a sung service once a month or so. That service, though, is usually Solemn Evensong and Benediction.

To understand this, you need to know a little Church History. After the first founders of the Oxford Movement, Newman and Pusey and Keble, there came another generation very concerned with improving the liturgical practice of the Church of England. Choral Services had survived in many Cathedrals, but now parish churches began introducing robed choirs, and they spiced up Choral Evensong with incense, and ceremonial taken directly from Rome. They were also engaged in making a sung Eucharist their central act of worship. Since vestments and ceremonial had all but disappeared from the Church of England’s worship, many of the leaders in this Ritual movement looked to Catholicism, and especially to continental Catholicism.

For this they were persecuted. Some of them went to prison for their activities. A Bishop of Lincoln was put on trial for lighting candles on the holy table in his chapel, and for mixing a little water in the wine of the Chalice. In particular, bishops were infuriated by the practice of reserving the Blessed Sacrament, and there were court cases to try to get it banned. Equally, they were opposed to other so-called Popish Practices, especially Confession, which its opponents thought would be a way for priests to seduce the women of England.

Because of the persecution, for Anglo-Catholics these became the touchstones of authenticity; confession, the reservation of the Blessed Sacrament, and a Sung Eucharist as the centre of their worship. Imagine our surprise on finding that in the Catholic Church these things were less valued than in our part of the Church of England! I caused some little stir in a local Catholic Church when I preached about confession. I told people that when I was asked in retirement to care for a little Anglican congregation I announced times for confession before Christmas and was delighted and not a little surprised to find a queue for the confessional. Equally surprising to me was the Catholic congregation which, on coming into Church after an Ordinariate Mass, flung open all the doors and windows to get rid of the incense! We had thought it was only Protestants who developed an aversion to holy smoke.

So is it our vocation to remind cradle Catholics of the value of some of the things you have lost? I don’t think so. That would smack of a terrible superior attitude; the very thing we wanted to leave behind with Anglicanism. It may be that the care with which we conduct worship is a mark of a former Anglican; but it is also surely the mark of any good Catholic. We enjoy singing hymns, and generally we have not gone for the vacuous little ditties which you would find in many Evangelical Anglican Churches – and also, I fear, in some Catholic ones. But that surely is something which the Church is tackling, in the wake of the new Translation of the Missal. It’s said our preaching is longer – I wouldn’t say better – than in Catholic Parishes. But that is maybe a function of being less rushed than most Catholic priests. 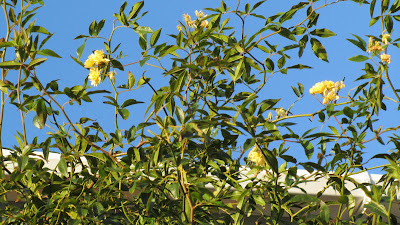 There has been, we are told, snow in the Eastern United States; yet here on the South Coast of England we still wait for our first frost. The picture above is of a rose in our garden - the Yellow Banksian Rose - which usually flowers in May. Then this afternoon we went to the Coast (Barton on Sea is just six miles from home) and saw these escapees from cliff-top gardens; I believe they known as Cape Fig, usually blooming in Summer - yet here are one or two precocious yellow blossoms. 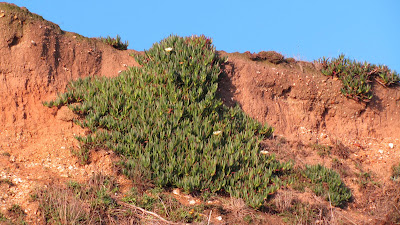 For all that, the sun is very low in the sky, and there is not much warmth left. We reached not much more than 12 degress C today, though without a breeze it felt quite balmly. 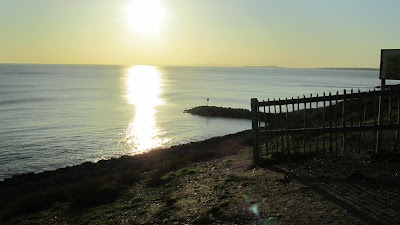 Still, winter approaches. In the Bournemouth Ordinariate Group (some of them seen below after Mass this morning) we are making plans for Advent and Christmas. We shall be joining the Parish for Midnight Mass and on Christmas Morning. Our Servers are very pleased to have been asked to assist at Midnight. We were a bit unsettled a couple of weeks back, with the announcement that our Pastor, Fr Graham Smith, felt he must move on. Msgr Keith reluctantly agreed, and has asked me to look after the Group as a temporary measure until such time as we have another former Anglican priest ordained. We have resolved to have fewer Masses (just Wednesday at 10.30 and the Sung Mass on Sunday at 9.30) but most of the Group seem to think this is a good arrangement, giving them the chance to worship in their local churches on other days. 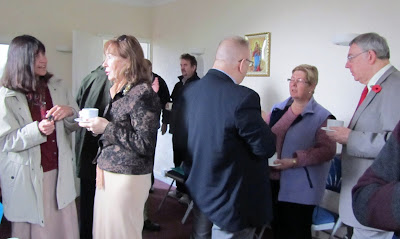