First there was our nephew and his bride of four weeks, from their new home in London. Then his parents (my wife's sister and her husband) who were married 40 years ago this year. Then us, soon to pass the 50 year mark. So all the family spent last weekend in Bourton on the Water, where we had rented a large house. It was a very merry party, with our daughter and her husband coming from South Wales with our grandson, our son joining us from Lancaster (he took the train to Wolverhapton and cycled the 60+ miles from there) and our best man came from Bristol - by car.

Bourton is so much visited that even the fish and chip shops have notices in Japanese. Fortunately the house was a little back  from the main road behind a high wall, so the tourist din scarcely reached us. It was, I think, only my second weekend away from our Ordinariate Group this year, so on Sunday Jane and I were able to worship together in Our Lady Help of Christians. Pevsner spends two pages describing the (Anglican) parish church and its architectural riches. The Catholic parish church would not require so much print: but it is clearly greatly loved. 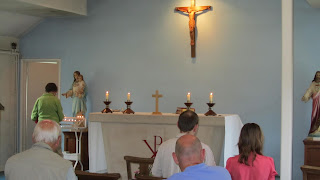 The hymns were familiar from Anglican days, though accompanied on a karaoke machine. The priest was a vistor like us, holding the fort while the Parish Priest was on holiday. Mass concluded with the Angelus. The place was comfortably full - I  overheard one person say on leaving "I expect there are visitors" - but though there were, no one made any attempt to welcome any of them or ask who they were. I  don't think visitors get away ungreeted at our Ordinariate masses - but there, we are a small concern,  so it is easier to know everyone. 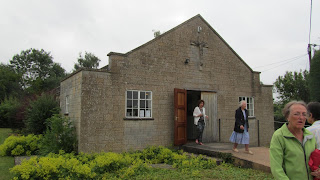 Then again, we were greeted at the Peace: and the service sheet said "Welcome to all our visitors! Our churches have induction loop faciilites. Use the T setting on your hearing aid." So that was some comfort - or would have been if we had hearing aids.
In the afternoon some of us visted a National Trust house at Chastleton. We were met at the entrance to the car park by a picket of locals protesting against Sunday opening of the House. The Trust, they claimed, had promised there would be no weekend opening, and that numbers would be kept very small. Now they are inundated with thousands of sightseers, and they feel betrayed. But whether it is a village with a National Trust property, or a settlement on the route of the proposed High Speed Rail Link, money is always the winner. 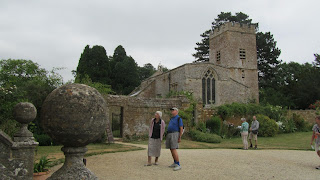 The Church at the gates of Chastleton House
So it was with a slightly guilty conscience that we queued for the house to open. The former manor house had been the home of the Catesbys. One of the Guides suggested it had been sold to fund the purchase of gunpowder for the plot to blow up Parliament - of which plot, apparently, she disapproved. The Jones family which built the present house in the early years of James I were Royalists, who suffered greatly during  the Commonwealth. Among the items the Trust acquired with the house were some splendid Jacobite glasses and decanters - the volunteer steward rather missed the point when he called them "Jacobean".  So perhaps the Joneses count as proto-Anglo-Catholics. 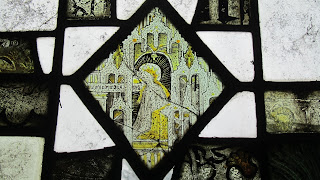 Cracked fragement of an Annunciation window in Chastleton Church
The high point of the weekend was a celebratory meal just a few miles out of Bourton. We toasted everyone, and were toasted ourselves. Helpfully our brother-in-law had organised taxis to get us all safely back. Then on Sunday evening and Monday in ones and twos we drifted off, back to normality from a memorable couple of days together. As Jane's sister had said, we must make the most of every opportunity or we shall only meet up at funerals. Not so long now to my eightieth, if I'm spared ...
Posted by Edwin at 22:40 1 comment: