To see ourselves as others see us...

The beautiful church of St Patrick, Soho Square, gave hospitality to the Ordinariate this week.  It provided the venue for a conference looking at how we might engage with the new evangelization. 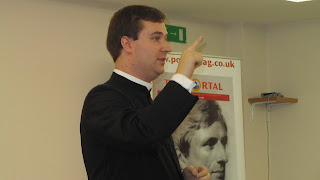 We had hoped to have Fr Allan Hawkins from Arlington, Texas, with us - alas, he had a nasty accident on a Metro escalator in Paris and was unable to be present; but at very short notice Fr Aidan Nichols OP spoke to us - as our Ordinary called him, 'the silver lining in the cloud of Fr Allan's indisposition'. 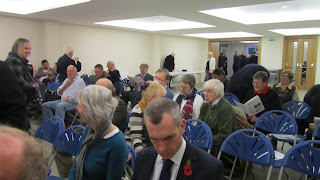 Eighty participants begin to settle down

He spoke about the current situation of Christians, and specifically the Catholic Church, in England. He perceived a gap, and reckoned that this was a gap which the Ordinariate was well equipped to fill. Although numbers attending Mass had held up, this was largely thanks  to immigration. The numbers of native born Catholics  had been declining, and former Anglo-Catholics continued to embody the 'natural form' of English Spirituality. 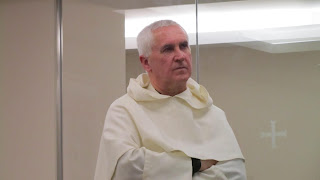 Fr Nicholls attends to a questioner

The Lineamenta of the recent Synod of Bishops had pointed to the need for the Spiritual  Care of worshipping Catholics,  for mission activity towards non Catholics,  and a New Evangelization towards post-Christians.
The Ordinariate, unlike any other Catholics, were equipped because of their history to fill the gap in the "long narrative of Albion". We came from that 'sporadic resurgence of catholicism' which was apparent throughout the history of the Church of England since the Reformation.  We had the advantage of not having experienced the disagreements in the Catholic Church which followed Vatican II. We were capable of being both entirely Orthodox in Faith, but ready to look at new methods of evangelizing. We should seek modern means communication to counter the assumptions of modernity in our day - as, in his time, T.S. Eliot had done. Fr Aidan perceived that we had a head-start over many Catholics in regard to Catechesis; our people had had to learn the faith to defend it against others in the Church of England 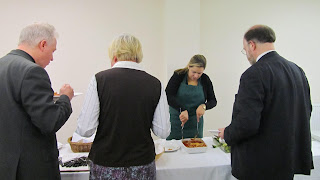 Attending to the inner man (and woman)

After a  lively question session, St Patrick's laid on a substantial lunch for us, then we were back in our seats for Part II, 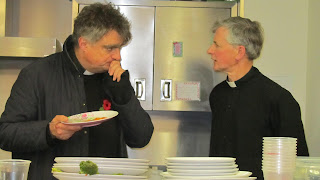 Washing up?
Fr Paul Richardson gave us four models of today's church. The first took account of secularisation to  explain where we were; and from this perspective the outlook was grim (despite the success of some Evangelicals in reaching the young.  The second model looked at New Forms of Spirituality; Christianity was not dying, but changing - so  the widespread interest in life after death &c the paranormal  - and a diminishing trust in science. But, asked Fr Paul, did this really stand up? Certainly  it had to do with the individualism and therapeutic mindset of today; but could a person be called 'spiritual' simply becaus he favoured alternative medicine? 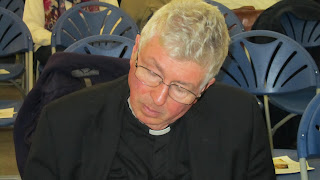 The third picture was of believing without belonging - a notion favoured by Grace Davey of Exeter University. That was to treat the Church like a Public Unitlity, there when you wanted it. But we have to pay our Utility bills; and increasingly many see no need to support any Church.

Finally, there was the element of Church Growth; immigration had a great deal to do with this, and there are half a million people who belong to Black Majority Churches in this country. Holy Trinity Brompton had reached out to the affluent young in London. Catholics are doing well among ethnic communities; though insisted Fr Paul, there are other growth areas within the Catholic Church.
He listed too such innovations asCafe Church, Messy Church and so on; and commented on the numbers who vist Cathedrals, not just as tourists but certainly as pilgrims.

He told us we must teach the basics of the faith, which are non-negotiable; but we must deal with and use the importance of experience; and here he saw links between some modern evangelical spirituality, and Ignatian spirituality.  The Church of England, despite its apparent diversity of worship, had never been able to include men like Wesley or Newman. They didnot fit the Anglican mould. The Catholic Church was far more genuinely diverse, with its different rites, its different styles of worship, it various Religous Orders: and now the Ordinariate was herfe to add to the mix. 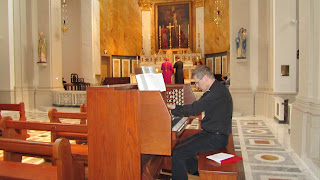 Fr Elliott Smith contributing to the Patrimony of Music 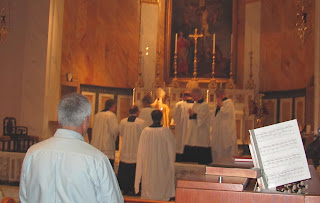 After another Q&A session, a lovely Mass celebrated (from the Book of Divine Worship) by our Ordinary. The Preacher was the Parish Priest of St Patrick's, Fr Alexander Sherbrooke, who gave us great encouragement. As Mgr Keith said, it is only Catholics who are NOT in the Ordinariate who can tell us what is our Patrimony; try  to do  it  ouurselves, and it sounds like boasting. The three who addressed us today all gave us great encouragement to work away as leaven or salt, and to do so with  patience.
Posted by Edwin at 19:22 2 comments: