The CofE is dropping its plans to make provision for those opposed to women bishops, according to today's BBC lunchtime radio news. There was no hint of where this 'news' came from. It does not appear to be a press release on that dire CofE website. So who is supposed to have decided? The Manchester Group? But they (like man) can only propose; Synod (like God) disposeth. But it cannot be the Synod, for it has not met. The Archbishops? The only authoritative statement they have made this year has been about swine flu - and the diversity of resulting practice makes one doubt their Graces' capacity for deciding anything. Maybe some better informed blogger than me has the answer - though it is not on Ruth Gledhill's page yet.

And if there IS no provision, that will open the door for many to claim constructive dismissal from a church which has changed clergy terms of employment retrospectively ... "obedient to the Bishop and his successors" indeed!

[PS: So now we have it, thanks to Fr Ed Tomlinson; it is, after all, the Manchester Group which has decided not to support anything but authority delegated from Diocesan Bishops - and we all know how generous those gentlemen have been to us in the past.

The paragraph from the Manchester Group's Press Release which is most relevant says:
The effect of the Committee’s decision is therefore that such arrangements as are made for those unable to receive the episcopal ministry of women will need to be by way of delegation from the diocesan bishop rather than vesting.

Hurrah! Now we can get on with the serious business of applying to the Holy Father for shepherds instead of having to rely any longer on the CofE's ravening wolves.]
Posted by Edwin at 13:43 1 comment:

Remembrance Sunday we spent in Cardiff. It was our first free Sunday in some weeks, and we attended Mass at St Mary the Docks, aka St Mary's Butetown, of Shirley Bassey Fame. 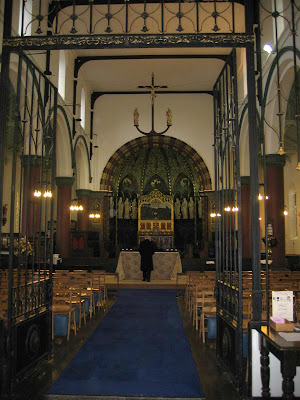 The altar was prepared by the Churchwarden, who also led the act of Remembrance at the Crucifix outside the Church. We waited for the beginning of Mass on the arrival of the celebrant dashing from another of the parish's churches (in Grangetown) where he had been delayed because of the Act of Remembrance there. 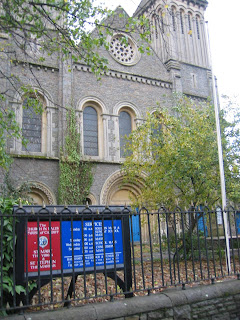 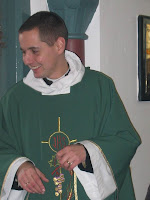 We were made very welcome, as ever - the celebrant was Fr Ben Andrews, Curate of the parish - the Parish Priest, Fr Graham Francis was returning from a cruise; no doubt he chose to go on one this weekend when the Gospel was about the Widow's Cruse that never failed...

Once in the depths of the slums of Cardiff, St Mary's is now within hailing distance of the great new John Lewis store, part of the gargantuan redevelopment of a once charming city. St Mary's is a stronghold of the faith, in a church which has consistently betrayed its traditionalists - most recently by the refusal of the bench of bishops (all six of them) to appoint a successor to the greatly loved and much missed Provincial Assistant Bishop or PAB, David Thomas. PAB in Welsh means Pope.
We were very generously offered a copy of the Diocesan Newspaper, Croeso, which had, we were assured, a picture of the Archbishop of Wales on every page. Somehow we managed to resist the offer. We did enjoy the open-air rendering of Land of Our Fathers (in Welsh) before we all sang God Save the Queen (in English). The memorial in the church to men who had taken part in the Russian Convoys I found especially moving, since my father had been mentioned in dispatches on one of those most terrible of Naval operations. It was during one of those convoys that my mother and I had gone to Greenock from which his destroyer sailed - and there, before he got back to port, we were bombed out (for the second time in the war). Ours will be the last generation with such first-hand memories of that conflict.
Posted by Edwin at 19:16 1 comment:

In one particular paragraph some of the difficulties raised by priests before its publication have been allayed; but not all.

III. Without excluding liturgical celebrations according to the Roman Rite, the Ordinariate has the faculty to celebrate the Holy Eucharist and the other Sacraments, the Liturgy of the Hours and other liturgical celebrations according to the liturgical books proper to the Anglican tradition, which have been approved by the Holy See, so as to maintain the liturgical, spiritual and pastoral traditions of the Anglican Communion within the Catholic Church, as a precious gift nourishing the faith of the members of the Ordinariate and as a treasure to be shared.

This makes it clear that the Roman Rite will be available to those within the Ordinariate; and so will allay the fears of those clergy for whom Anglican rites have little appeal. But the same paragraph begs another question which I hope will not go away. It speaks of the need to maintain "spiritual and pastoral traditions of the Anglican Communion". For me, one of the greatest gifts of our Communion is the fact that our priests may marry. My wife is not a problem to be negotiated; she is a gift to me and to the Church, and my vocation to the married state is no less important to me than my vocation to the priesthood.

'Anglicanorum Coetibus' goes a little way to admitting that our priests may continue in the married state: in VI para1 it says "In the case of married ministers, the norms established in the Encyclical Letter of Pope Paul VI Sacerdotalis coelibatus, n. 42 and in the Statement In June are to be observed." That is to say, married Anglican Clergy may be ordained in the Catholic Church in certain circumstances.

This does not, though, affect the general rule of celibacy: VI para 2 "The Ordinary, in full observance of the discipline of celibate clergy in the Latin Church, as a rule (pro regula) will admit only celibate men to the order of presbyter. He may also petition the Roman Pontiff, as a derogation from can. 277, §1, for the admission of married men to the order of presbyter on a case by case basis, according to objective criteria approved by the Holy See."

We should recognise first that it is a very great concession by the Holy See that ANY married former Anglican clergy may be ordained, and we should be very grateful indeed for this. The question for me is how far the 'derogation ... on a case by case basis' will actually be applied. It could be the thin end of a wedge permitting a gradual acclimatisation of the Catholic Church to a married priesthood - which, of course, it already has in some of its Eastern Rite variants. Or it might mean that this is something which will die out within a generation.

I believe the Holy See is serious about wanting to bring the liturgical, spiritual and pastoral traditions of our Communion into the fullness of the Catholic Church. We should not suppose that all of what we want to bring with us will be appropriate or valued or acceptable immediately. Certainly, though, there is a need for prayer for mutual understanding; between those Anglicans who will want to accept this generous offer at once, and those who will hesitate; between those who will join the Roman Catholic church, and those who will feel obliged to stay attached to the see of Canterbury; and above all, perhaps, between those who will seek to become part of the Ordinariate and those already in the Roman Catholic Communion who might find us a bitter pill to swallow.
Posted by Edwin at 10:36 4 comments: