You say Tomayto, I say Tomahto

In the 'Catholic World Report' recently Anthony Esolen wrote about 'Paint by numbers' hymns. He compared some of the modern efforts as nothing better than the paintings which are sold as printed sheets with numbered spaces; just fit the colour to the number.

"We do have a rich treasury of hymn-poems to read, to sing, and to keep close to the heart. Some of them are almost as old as Christianity itself. They come from Latin and Greek, from our own English, from French and German and all the languages of Europe. Some were written by saintly divines with a fine ear for poetry: John Henry Newman (“Praise to the Holiest in the Height”), Charles Wesley (“Love Divine, All Loves Excelling”). Many were written by the great Dr. Isaac Watts, who set the psalms to English meter and rhyme. Some rose up from an anonymous lyricist among the folk: “What Wondrous Love Is This.” Some entered our language by the skill of great translators, like John Mason Neale and Catherine Winkworth. Some were the work of pious laymen who meditated upon Scripture all their lives: so the blind Fanny Crosby gives us “Jesus, Keep Me Near the Cross.” Just as many of our most beautiful melodies were written by the finest composers who ever lived—Bach, Handel, Haydn—so too many of our hymn lyrics were written by poets of some renown: George Herbert, Robert Bridges, Gerard Manley Hopkins, John Milton.
So why, then, why do we have verse-by-numbers lyrics posing as real poems in our hymnals? Why, when we have such a trove of the great, the profound, the beautiful, the memorable, the poignant, the splendid, do we have to endure what is banal, clunky, clumsy, dull, vague, and silly? "

That's a view I very much share; but his very first word, "We", set me thinking. It is used so often and so lightly; in the comment on a blog it was asserted that "We" do not want certain usages which the writer thought were specifically Anglican. Blogging as mediaMouse she(he?) wrote for the edification of members of the Ordinariate; "we don’t speak ‘of ‘priestings’ and ‘deaconings’ in the Catholic Church. That kind of language only alienates you more. We don’t want that and you certainly don’t!!"

Happily another cradle Catholic put him/her right, asserting that the verb "to priest" was pre-Reformation and had continued in use among Recusant Catholics. But it is hard to know just which words and phrases perfectly natural to some create problems for others. There is just such a usage earlier in this very paragraph... I suppose many people writing today would have said "another cradle Catholic put them right" since "them" and "they" has become the politically proper way to avoid using a gender-inclusive pronoun ('he') or the cumbersome 'he/she'.

Those of us who learned English Grammar before it became unfashionable find it hard to use a plural pronoun where the original subject was in the singular. We have other difficulties - even with the new Translation of the Missal, which is generally so much better than the former version. In particular, in the Roman Canon (Eucharistic Prayer I) I have to swallow hard before saying "which we offer you firstly". The adverb, I was taught, was "first", and "firstly" was a barbarism. Then, in my prejudiced way, I supposed this innovation must come from across the Atlantic. Not so. How helpful are Google and Wikipedia! It seems that "firstly" is not much heard in America - it is a genuinely English grammatical error, now in common usage - very common, my old English teacher would have said.

It is supposed to be G.B.Shaw who said England and America were two countries divided by a common language. Perhaps something similar could be asserted of long-standing Catholics and us more recent imports. We knew we had a great deal to learn; the instruction on receiving the dignity of Monsignor spoke of mantelletas and farraiolos (not happily for those of us of low degree) - but I would not recognise a ferraiolo if one bit me. Other Anglicans, both former and present, are more learned in such things. Even the word "Ordinariate" does not trip easily off the tongue - and that word has different pronunciations. Some of us would say it like "airy" while in Tunbridge Wells it is an 'ordinahriate".

We are learning so much - shall we also have to unlearn even more? Never again to distinguish between the Making of Deacons, the Ordination of Priests and the Consecration of Bishops? Where did that come from originally - is it pre-Reformation, like "priesting" and "deaconing" or is it something fondly invented by dear Doctor Cranmer? Are we genuinely bringing something of the Patrimony of the Church of England into the Catholic Church, or are we spoiling it with our funny ways? We can only find out as time goes by - and as we let each other know what things we find charming, and which just irritate us.
Posted by Edwin at 15:03 1 comment:

...for that which was lost is found!

Thanks to everyone who asked so kindly after my camera (see previous blog). It has turned up (at Allen Hall) so I hope to trip up there on Friday to collect it . Now I know how the woman felt who lost the coin - I would invite everyone in to rejoice with me, but what with this dreadful weather and all....
Posted by Edwin at 17:01 No comments:

Rejoice with those who rejoice...

"Just like the early Church" is the constant refrain of one of the members of our Ordinariate Group - and increasingly I believe she is right. Whereas in large congregations, the names of the sick go past making little impression, with us we seem to recognise each person; "yes, that's John's dad - he's having a hard time just now... Ah yes, Ray - such a dear man - was Head Server, now he is confined to his nursing home, but he receives the Blessed Sacrament each week". And so it goes on. Today though was a day of happiness; for one of our members had been to the Royal Marsden for a consultation about his cancer, and there the Professor was far more positive and helpful than anyone had been before. So we rejoice with those who rejoice. 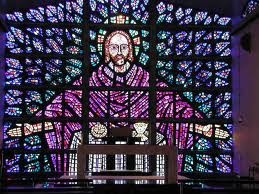 There is a marvellous commitment among the members of our Group. When we heard about the lecture at Buckfast (over 100 miles West of us here) our organising genius, Madeleine, set about finding details. Eventually some went by car, others by minibus, and we were the farthest-flung group to hear Professor Tracey Rowland on the New Evangelisation. It was good to hear how much the Holy Father has taken from the teaching of Blessed John Henry Newman. Some of it was pretty hard going, but we were glad to know that before long we shall be able to read what Professor Rowland said, and ponder it at greater leisure. There are pictures from the day on Flickr, posted by Fr Bradley on the Ordinariate site. [Above, the Blessed Sacrament Chapel where we celebrated Mass, and before leaving sang Evensong.] Most of us were home again soon after 8pm (many having set off around 6am) and everyone managed to get to the 9.30 Mass today. We are beginning to get a few enquirers joining us, so there are more to add to our prayers. 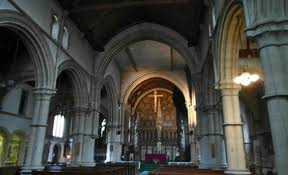 Now the Group is gearing itself for the big day in September; on 22nd at Noon in Sacred Heart church, Bournemouth [picture above], Deacon Brian Copus is to be ordained a Catholic Priest, together with Deacon John Maunder from the Ordinariate Group at St Agatha's, Portsmouth. We have been given responsibility for organising the day, so Fr Bruce Barnes, the Parish Priest of Sacred Heart, comes over soon for a meal to begin planning. At the same time we are making contact with the Portsmouth Group to ensure that we are not going off at a tangent. Please pray for these two candidates for the Priesthood; and pray too for the Church of England, preparing for an important Synod in a week's time. Romans 12.15 seems especially appropriate just now.