Fifty years ago on this very day (which was also a Saturday) Jane and I were joined in Holy Matrimony by our then Vicar at St Mark's North End, Canon Peter May. St Mark's went soon after we left Portsmouth to be replaced by the ugliest brutalist concrete abortion in England, so we could not go back there to recall our wedding day. Instead we went to one of the newest of Pompey's attractions,  the recently completed Museum Gallery of the Mary Rose. It is spectacular. 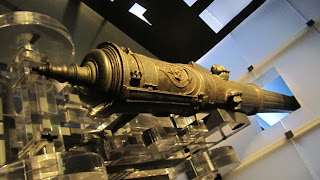 This is just one of the many guns brought up from the seabed - and the perspex housing lets you  see the whole of the works - though in some places even the timber gun-carriages have been preserved. One of the more poignant memorials is a case containing religious artefacts, mostly Rosaries but also the covers of some books of prayers, crosses and so on. This was in the latter part of  Henry VIIIs reign, after the breach with Rome. It was only thirty or so years later that his second daughter, Elizabeth, proscribed the use of the Rosary. So  Mary Rose sank at that crucial time when England might have remained Catholic - by Elizabeth's reign the breach was irreparable, and the anti-Roman propaganda was doing its worst. We still live with the damage begun then.

The curators have created a mirror image of the original ship, so on one side you see the timbers raised from the sea-bed, and on the other the multitude of items taken from the wreck, set up as if on continuations of the decks. We thought it  would be a visit of maybe half an hour - instead we were engrossed for three times as long.

Once again my pictures are refusing to download to the blog, so the one above will have to stand for all the rest. Very frustrating. We ended up having tea (with a wonderful view of Victory, stripped of her Masts and undergoing yet another refit). Then a dash home, a brief respite and a change of clothes, and out to a very good evening meal at Gordleton Mill. A lovely way to mark a great day; and tomorrow it is off to Southbourne for Mass with our great Ordinariate gang.