Today we should begin by wishing our rebellious colonials "Happy Independence Day". Our week began in an unusual encounter; an English Texan meeting a Texan Englishman. Fr Allan Hawkins, from Dallas/Fort Worth visited us with his wife Jose - they are now American citizens - and met our Texan ordinands, Darryl Jordan, who had recently achieved British citizenship. 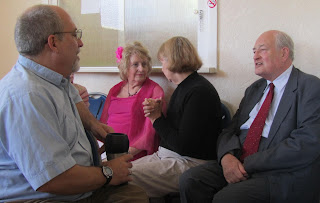 Darryl (l) and Fr Allan in conversation - between them, Margareta and Jose
We had all packed into the small Hall after Mass so that Fr Allan could tell us about his journey from the Church of England, via the Episcopal Church, into the Catholic Church - first, the Anglican Provision and now the Ordinariate. By another strange coincidence we had visitors with us who came from Swindon - where both Fr Allan and our own priest Fr Brian Copus, had served. Small world 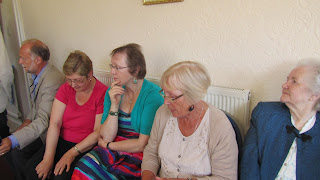 It was, as you can see, quite a squash.
Then last evening I had some explaining to do: Fr Marcin, the Polish priest in our neighbouring parish of Our Lady of Lourdes, New Milton, had invited me to speak about the Ordinariate to some of his parishioners.

He wanted this rather formal picture for the record - he has recently discovered some of the ancient trasures of the parish and put them on display - maybe one day we shall feature in an exhbiition of ancient treasures. Meanwhile, I must go off to say Mass at his Church which I do most Thursdays.
﻿
Posted by Edwin at 09:25 1 comment: