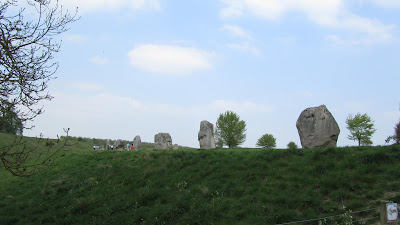 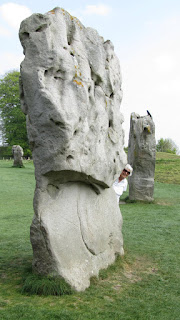 That wedding has stirred up a great deal of conversation; some concerning the need in our lives for ritual, and even religion. So I thought you might like a picture or two concerning our religious and ritual roots. We collected our young grandson the other day for part of his half-term break. We met him and his parents halfway between here and his South Wales home and finding ourselves near Avebury devided to make the diversion. This central England of chalk downland and river valleys holds within it some of the most magical elements of prehistoric times; burial mounds, henges, Silbury - largest man-made hill in Europe. There are stone avenues heading off across the plain. English Heritage cares for the site, and provides lectures on Shamanism and Druids and all manner of invented stories. The stones themselves speak more eloquently. 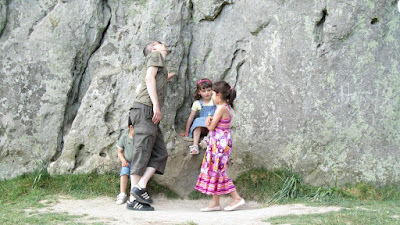 This great arrangement of ceremonial stones still evokes wonder: how did those prehistoric people erect such a monument, and why? It was good to see so many families there, playhing, picnicing, and simply wondering at it all. The Avebury circles predate Stonehenge, and even the Pyramids of Egypt. It is hard to grasp the scale of such a construction, which encircles a whole village. Although many of the stones have been removed, broken up for building materials, even buried over the centuries, what remains still speaks of the human need for meaning in life. So just look at the stones, and enjoy them. 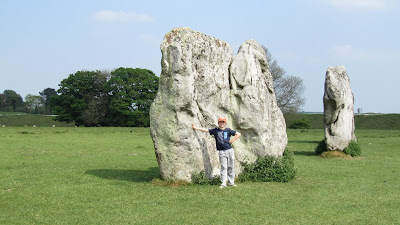 [Click on the photos for a larger version]
Posted by Edwin at 10:23 No comments: 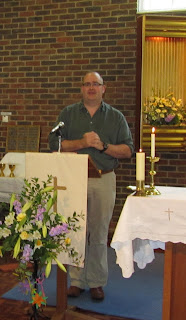 It was great being able to share in the Triduum in an Ordinariate setting; not a parish yet, since its priests await Ordination - but certainly a wonderful group of people, eager to begin the task of Evangelisation as members of the Ordinariate of Our Lady of Walsingham.

Jane and I were given great hospitality in Tunbridge Wells. Soon-to-be Father Nicholas Leviseur (formerly NSM assistant at S Barnabas', and alredy assisting Ed Tomlinson in setting up the Ordinariate, to be based in Pembury) is a great host, and with his wife Mary and their four children they made us hugely welcome.

Since Ed, in his own blog, encouraged me to do this, I am posting a version of my sermon from the Easter Vigil Mass. Printed sermons never quite do the job - they need to be spoken and heard - but for what it is worth here it is.

Towards dawn on first day of the week, Mary of Magdala and the other Mary went to visit the sepulchre. Mtt 28.1

The more we look forward to something, the longer the waiting can seem. Do you remember that interminable time when you were a child, and grown-ups would say “Christmas will be here very soon”. It did not seem soon to you; and if you were awake on Christmas Eve, the night was endless. Now though we are grown-up and we’ve been getting good at waiting. Though truth to tell we have not been in the queue very long. Others who have joined the Catholic Church have undertaken much longer preparation; and especially this is so for priests. I hope to be at a friend’s Ordination next December; and he became a Catholic four or five years ago. But Lent will have seemed long this year for all that, Lent without the consolation of Communion. And for your two pending priests, Eastertide will seem a long stretch.

The women who came to the tomb had a shorter wait, but then they were not looking forward to what was to come. Dreading it, probably. It had been a rushed job on Friday, just a couple of hours between taking the body off the Cross to getting it as decently entombed as possible before the Sabbath. No chance to put flowers on the grave; no proper ceremony, washing the body, spices and prayers. Just a couple of cloths to wrap him in, and his blood was congealing and staining those wrappings.

So they expected a gory sight, if ever they managed to get the stone rolled back. Perhaps the guards would help? They would not be able to do it by themselves. There had been a gang of soldiers to obey orders on Friday .. just a day and two nights ago. They had been told to make it secure; and so they did. Not just with that great boulder to shut it up, but official seals to secure it, and a guard to ensure there was so tampering with it. The authorities were prepared in case his disciples came to steal his body.

That is what is convincing about the Easter Gospel. What they confronted on Easter morning was totally unexpected. Death and decay and depression is what they thought would meet them; and it was not like that at all. Instead, an open grave – something incredible had happened.

Would you say that already in the Ordinariate you are beginning to find another sort of resurrection? We were fearful – well, maybe you were not; I certainly was, and so was my wife. How would these cradle Catholics treat us? After all, we are a strange bunch; arguing all the time until only a few months ago (and how we did argue) that the Anglican Church was a model for all Christian Churches – we even heard our Archbishop telling that to the Pope. Then getting disillusioned and jumping at the Holy Father’s offer; only to wonder just what we had let ourselves in for. Last Tuesday, for us, Jane and me, was one of those little resurrection moments.

We had been at the Chrism Mass, and that was great, and the music better than we dared hope. But there was an ordeal to come; lunch with the clergy. Eighty long-established celibate Catholic Priests, and us. We need not have worried. Priests came to introduce themselves, and the moment we said the word 'Ordinariate' they would say 'Welcome', and their smiles showed they meant it. Then we came upon four former Anglicans, two of them married men, who had all joined the Church a few years ago. They and their wives seemed happy to show us off to their friends. The fear of what we would meet was replaced by a prospect of new and wider friendships than ever we had known in the past.

Now of course it is foolish to compare our happiness at becoming Catholics with the pure astonished rapture of the women at the tomb, and the disciples. Our experience has just affected us; theirs has changed the whole world. Except, perhaps, that these little beginning, here in Pembury or with our Portsmouth Ordinariate groups are a new flowering of the Resurrection; little events which will give hope and confidence to more people than we can imagine. Easter is always the same, but always different. For you the differences are very plain; no cavernous spaces of St Barnabas’ to help lift up your hearts. Until now you have been able to rely on the generosity and the prayers of those who preceded you in that place.

Now, it is for you by your love and your prayers to make a new home, a place where many will feel welcome. It may be, too, that St Barnabas’ had served its purpose. We who were familiar with it thought it friendly; but that was not always the first impression of those going into it for the first time. There, it was possible to be satisfied with keeping things going; here, there is a job to be done. We need to keep in touch with our former Anglican friends, to ensure by our kindness that we don’t put up barriers. We will be looked at by many to see just what sort of a go we can make of being Ordinariate Catholics. It is a hugely exciting resurrection task that faces us; but we were not just seventy-two who came here. With us, ahead of us even, came our Blessed Lord, who well knew in his time on earth about having nowhere to lay his head. Now He is here, He is with us, He is risen! This is how it was the first Easter; filled with awe and joy the women came quickly away from the tomb – and went and told the others. Let that be our experience too this joyful Eastertide; filled with awe and joy, let us go and tell the good news to everyone we meet.

The Triddum was completed today with a visit by the Coadjutor Bishop in Southwark, Mgr John Hine. Here he is flanked by the parish priest and me, and the two priests-in-waiting, Ed and Nicholas. 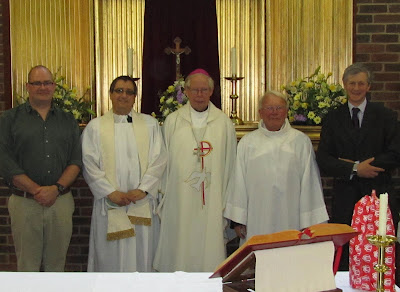