For its second annual colloquium, the Confederation of Catholic Clergy met again at the Oratory School in Reading. This time our numbers had more or less doubled - about a hundred participants - and again there was significant participation by members of the Ordinariate. Indeed, our Ordinary, Mgr Keith Newton, preached at one of the Masses. 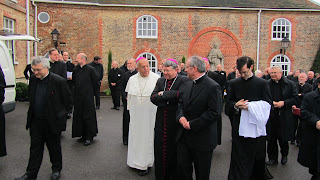 In the picture above he is talking to Archbishop Augustine di Noia, and one of the organisers of CCC in England, Fr Peter Edwards. We listened to some outstanding speakers. Bishop Philip Egan, fresh from his Ordination to the See of Portsmouth, set us off with a stirring address at the first Mass of our two days together. Then Fr Uwe Michael Lang spoke on twenty years after Sacrosanctum Concilium, and gave us pointers towards a new liturgical movement; a movement in which he asserted that the words spoken were important - but not as important as the way in which they were said, the whole conduct of the Mass. For me that was particularly encouraging (see the comments on the previous blog posting).

We were encouraged to take vocations seriously, by Fr Stephen Langridge; many are aware of a call, but that needs to be endorsed by others. It was for us, and the faithful, to ask "Have you thought about the priesthood - the religious life?" ... and then to follow it up with further questions. We should not leave it to the experts. 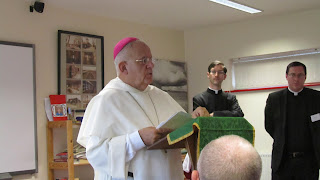 Archbishop di Noia is a Dominican, and I had been asked to convey greetings to him from our Dominican Sisters in Sway, which I duly did, and he responded warmly. His address on the new evengelization was for me one of the highlights of the Colloquium. He is a great catch for CCC, having only this summer been appointed to the post of vice president of the Pontifical Commission 'Ecclesia Dei, with the task of reconciling traditionalist groups to the Holy See.

The concluding address was by the Revd Dr Andrew Pinsent of the Oxford Theology Faculty on Science, Grace and Catholic Enlightenment. It was good to see him reclaiming Enlightenment for the Church, instead of allowing the 18th Century Encyclopedists, Diderot and his gang, to claim the title for themselves. He gave us so much in a very sort space of time, and it would be good to be able to peruse Fr Pincesnt's ideas at leisure. Finally Bishop Geoffrey Jarratt of the diocese of Lismore in Australia brought us greetings from our antipodean brethren - who were the originators of the Confederation, and inspired those who began the English branch just a couple of years ago. 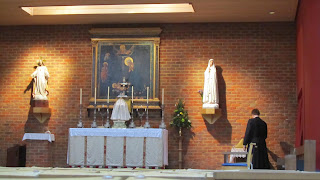 Central to everything during the Colloquim was worship. Here the altar is being prepared by another member of the Ordinariate whom some may recognise.
﻿ 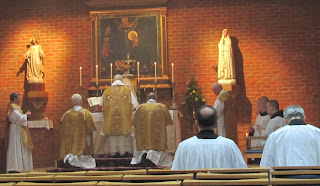 This was a great time for meeting old friends - Fr Dennis Lloyd who was Principal at Mirfield at the time when I was doing a similar job at St Stephen's House - Fr Peter Newsam, who has grown a beard since his student days, so that I did not recognise him at first - and a time too for making many new friends from all parts of England. For all of us, the beautiful liturgies and the times of silence before the Blessed Sacrament were a great refreshment, balancing the fellowship and the lectures - all together contributing to the aims of CCC, Fraternity, Fidelity and Formation. We are all deeply indebted to the handful of priests who organised these two days together, and look forward to future events. If you want to find out more, go to the CCC Website http://www.confraternityccb.org.uk/CCCB/Home.html