Sorry, I couldn't resist the pun in the title; though I was tempted by "Watt's Up?" So I should explain. Today we went up to Guildford, to see an old parishioner in hospital. Mary has been in intensive care for three weeks now, is on a ventilator, yet manages (though she cannot speak) to make herself understood. She was full of life, and it was a joy to see her. If you could spare a prayer for her, I know she would be very glad indeed. She was sacristan in Farncombe Church during my time there, but that only hints at her multi-talents. She is enthusiastic abut her garden. She has also been housekeeper to a succession of Catholic priests in Godalming. A lovely woman.

So where does Tennyson come in? Well, we set off from home early enough to visit the Watts Gallery in Compton (the next village to my one-time parish of Farncombe) and there we came face to face with Tennyson - or rather the great plaster statue of him which was eventually cast in bronze for Lincoln Cathedral. 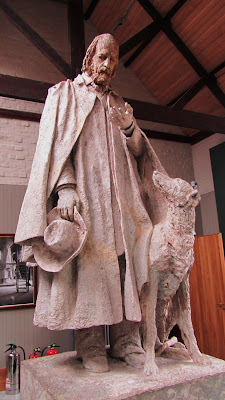 We had been to the Watts gallery forty years ago, when it was mouldering and the pictures were in real danger from leaking roofs. In the past few years, thanks to money from the Lottery and a galaxy of donors it is resplendent and shows the pictures off to their best advantage. The Portraits had some real winners among them - I particularly liked Swinburne. You could see why he might have been the model for Bunthorne in Gilbert & Sullivan's 'Patience' - and in a recent show at the V&A there was a teapot surely based on his extraordinary visage. But G.F.Watt's great allegorical works left both Jane and me quite cold. Something very repellant about those slimy insubstantial images There is also a mortuary chapel, the work of Watts' wife and a host of locals who worked at the gallery making pots. I once conducted a funeral in that chapel, a train-crash of a building - Byzantium meets Arts and Crafts with a dash of Theosophy, and the acoustic of a swimming bath.... but go and see for yourself. It and the Watts Gallery are just off the A3 a couple of miles south of Guildford.

In case you think I am taking life too easy, be reassured. Tomorrow it is Bournemouth in the morning for Stations and then Mass, and in the evening a Liturgy of Reconciliation over in Ringwood. Our Parish Priest, Fr Danny, has broken his shoulder, so I shall also be saying Mass here in Lymington on Friday. You might spare a prayer for him, too; he is in a deal of pain, and barely managing to sleep at all. Thanks.
Posted by Edwin at 22:11 1 comment: