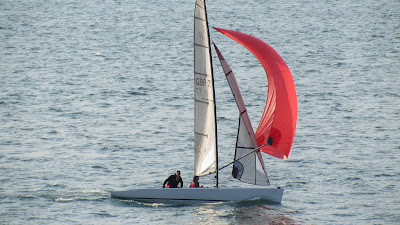 Lymington is full of Yachtsmen - and women - most of the summer; but especially just now as Cowes week begins. A couple of days ago we paid another visit to the Island (the Isle of Wight, that is) and the return journey through fleets of competing boats practising I guess for this week's competitions must have tested the Captain of the Ferry. 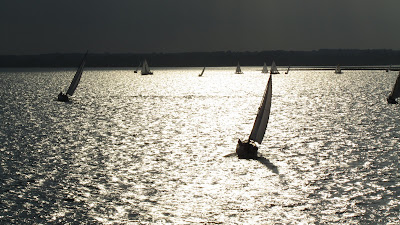 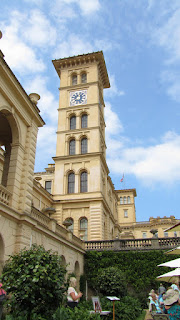 We have had many visitors this month, and they always give us an excuse for returning to favourite places. So we took an old school-friend of Jane's to Osborne, to be reminded of Victoria and Albert, and the impact they had on this little Island. Albert had a hand in designing their hide-away; some visiting crowned heads though the place far too modest. It set a fashion for neo-Italianate villas, just as Balmoral spawned many turreted baronial semi's and tartan wallpaper. It is still a treat to enjoy a meal at the restaurant on the terrace at Osborne, sitting where the Queen Empress might have sat.

It also created an opportunity for us to see friends on the Island. Fr Jonathan Redvers-Harris and his wife Wendy have moved from a spacious vicarage into a slightly smaller house. The plus side though is that this house, which the Catholic Diocese of Portsmouth is renting for them throughout the next year, has a large garden, with distant views of Portsmouth Harbour. It was good to catch up with them both, and elder son Jack - the only one of the five children at home the day we called. We heard about the way the Island's Ordinariate Group is beginning to take off thanks to the generosity of their local Catholic parish. In our own Bournemouth Group we are experiencing similar friendliness, and at this morning's mass some of the their regular congregation joined us, or simply called in to say "Hello" as we took refreshments just before their 11o'clock Mass began. Next Sunday afternoon we are experimenting with Evening Prayer and Benediction at 4pm, and Fr Graham, our Pastor, is issuing invitations to join us then. 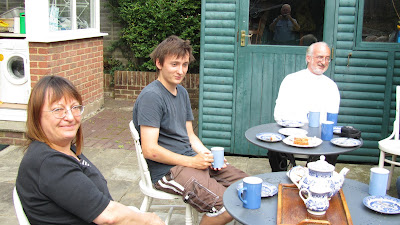 Another old friend who was with us earlier in the week is the sole begetter of EFFA, the Ecumenical Friends Of Fatima Association. It has becomed ecumenical in ways we could not have envisaged when we set it up a decade and more ago. Then it was an entirely Anglican body; now about a third of the membership are in the Catholic Church, and of these twenty or so are members of the Ordinariate. I am sure Our Lady of Fatima (and of Walsingham) had a hand in this. On this visit Fr Malcolm Gray was only with us in Lymington for a couple of nights, but we still managed to sample one local hostelry, as you see from the picture below. 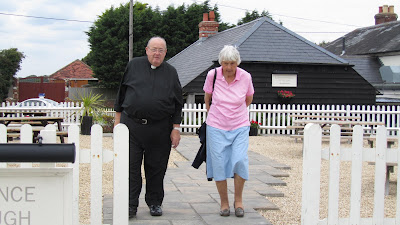 FOR YOUR PRAYERS: We heard this week from Bishop Crispian (our local Catholic Bishop in Portsmouth) that he has to undergo major surgery later this summer - please pray for him at this difficult time. Then today I learned of the death of an old friend, Canon Roger Greenacre, well remembered for his work in establishing the link between the dioceses of Chichester and Chartres. Requiescat.
Posted by Edwin at 21:21 No comments: