The day began especially well; a new family at the 10.30 mass, with a very new baby - who became a visual aid when the Gospel spoke about the disciples as "infants". The total trust of  that little girl  sitting on her dad's lap throughout Mass was a joy to us all. Dad is Syrian, Mum, though English, has parents who were in Argentina - so Maria, who come from there, was delighted to welcome them, and spent most of coffee time with the baby girl in her arms.

From Southbourne Jane and I went over to West Bournemouth (or is it  Poole?) to meet my former Secretary Mary and her husband Gerald, who have an apartment near Branksome Chine. We had lunch together and caught up on news from St Albans. 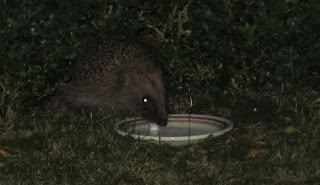 The garden then occupied me for some hours, dead-heading roses and watering - it has been so hot and dry for days now. Late this evening Jane gave a saucer of milk to the resident hedgehog. What a charming creature -  though they are reckoned to be full of fleas. It is difficult to scratch, I suppose,  when your fur is all prickles. So, a rather unchurchy post, but thought you might like at least to see the hedgehog. 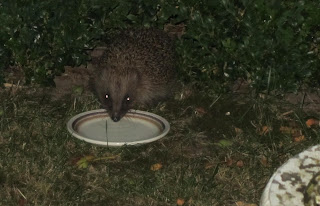 By an odd bit of mismanagement Fr Brian and are are both away this weekend, and our Group will not be worshipping together - but more about that next week, I hope. And next week, too, Darryl  Jordan (former curate at Christchurch Priory) is to be ordained Deacon for the Ordinariate.
﻿
Posted by Edwin at 21:54 No comments: