Waiting for a Medal

Everyone is going on about enthronements or inauguration or whatever we are to call these events so today I am off at a tangent. The Prime Minister was addressing a little group of former sailors at Number Ten earlier this week. He became quite emotional saying what an honour it was for him &c &c. It would have been good if he, or better still his predecessor but six or seven, had seen fit to honour them when more of them were still alive. The men he was meeting had all served on the Russian Convoys in World War II. 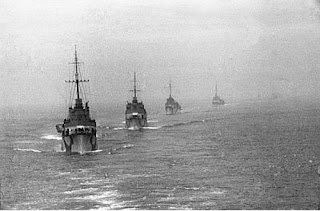 Mother and I had gone first to Birkenhead, since Father was to sail from Liverpool. We had only been there a few days when a night raid of German bombers dropped a land-mine just outside the house where we were lodging. So Father decided that since his next port would be Greenock on the Clyde we had better go there - it was, he said, safely out of the range of German bombers.
It proved not to be so. Within a week of arriving we were bombed there too, the house where we had digs was uninhabitable, and we had to find somewhere else to stay. I think I was six at the time. When Father returned from that Convoy, he took a litle time finding us.
So I have memories of the Russian Convoys; the "Whoop, whop" of destroyers leaving port or returning home, the shore towards Gourock barricaded with barbed wire. My dad did not say much about his life at sea - but he had a little oak leaf on one of his medal ribbons, signifying he had been Mentioned in Dispatches. He also had a permanent souvenir in the pockmarks of shrapnel in his neck which he bore until his death - at the age of 58. He had served in the Royal Navy for twenty two years, joining in Boys' Service a year before he was legally old enough; his older brother signed his papers for him. He was Commissioned as a Warrant Officer Gunner, but was invalided out of the Service only a couple of years later aged 36, his health having been undermined by those terrible Arctic voyages.
Now he is to receive a medal. I shall put it with his others, ready to hand them on to our Grandson in due course. I went back to Greenock a few years go, and found it, to my surprise, quite beautiful. The view across the Clyde to the snowy hills above Loch Lomond were magical - my memories from childhood had only been of greyness and cold. Also the misery of being an English boy in a Scottish school mocked for being unable to roll my r's. Our own son suffered similar humiliation when we moved to Hull from Surrey, and his schoolmaster told him the word was castle, with a short a, not 'carstle" .. "there are no r's in Castle", he said. Yet our son has a great affection now for Hull. He has a more generous spirit than I possess - for I rather hope the Scots will make fools of themselves and vote YES in next year's referendum. But don't tell my Scots brother-in-law that I said so!
Posted by Edwin at 21:50 No comments: