Our Lady of Sorrows

Mgr Keith Newton, our Ordinary, preached very movingly and simply on the Sorrows of Mary on the Ordinariate's pilgrimage day in Walsingham (r. the Slipper Chapel, part of the Catholic Shrine). For all that, the keynote seemed to be one of joy. Such a brilliant sunny day (compensation for last year's deluge); a great turnout of the faithful (some had to stand throughout the Mass for lack of room); some forty concelebrating ordinariate priests. We had a great deal to be thankful for. 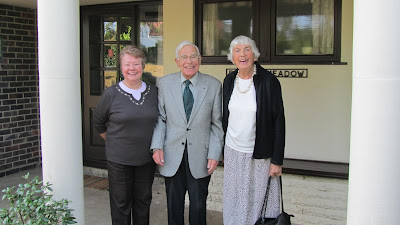 So after our 450 mile two-day round trip, I thought I should post at least a few pictures for those of you unable to be present. It was only through the kindness of our old friends Dr Michael Peel and his wife Daloni (formerly i/c the College of St Barnabas) that we were able to break the journey with an overnight stop at their home in Suffolk. 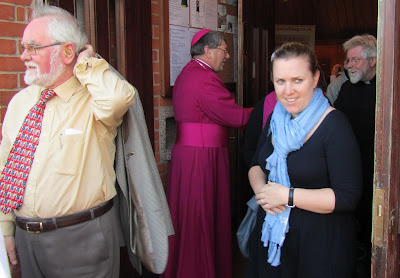 Mgr Keith greeting members of the congregation after Mass. 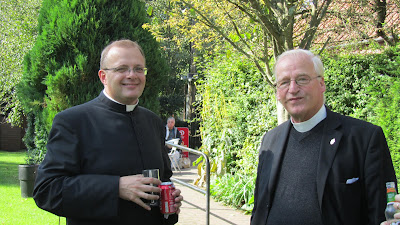 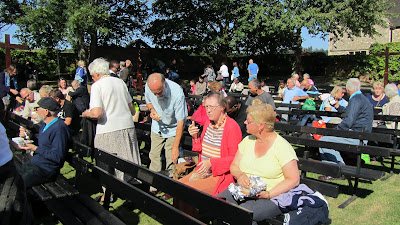 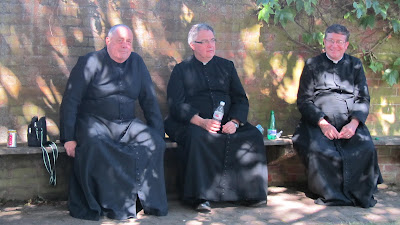 A merry post-prandial trio of priests

and a pair of Ellises comparing notes 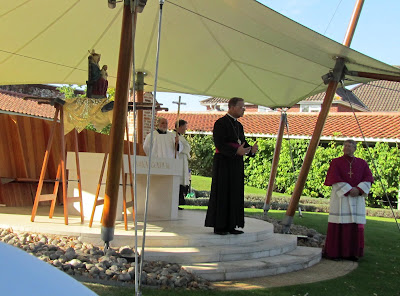 There's none so deaf as those who won't hear

We are getting ready for the Ordination of two new priests in twelve days' time, so no opportunity for new blog thoughts. Instead, you might like to argue with this, Sunday's sermon -

'He even makes the deaf hear and the dumb speak'

It was because of the Paralympics that the Sunday programme was discussing the Bible’s attitude to disability. Once again, the BBC was parading its so-called liberal attitude; which less kindly we might call its unfailing Political Correctness. So we had a blind theologian complaining that the image the Bible gives of disability is often very negative. It uses ‘blindness’ as the equivalent of stupidity, because Jesus tells the Pharisees that they are blind fools. Much better, said the unsighted theologian, to have called them stupid fools. So just imagine the outcry from the community of the congenitally stupid. The blind professor said his blindness was none of his fault; but then neither is stupidity or foolishness. There was even a suggestion in the programme that by healing the blind or the leper Jesus was altering people’s situation for the worse. Much as you will be told that Christian Missionaries in the 19th Century should not have preached the gospel to head-hunters or cannibals because that was their culture.

Well it’s a great deal of nonsense, of course. Blindness is a dreadful affliction, and if we can cure it we should; but so often Jesus contrasts the physical disability of a person with its far worse spiritual equivalent. When he healed the man born blind, the Pharisees wanted to pretend it had not happened; they wanted to shut their eyes (I suppose that is not an offensive image) they wanted to shut their eyes to the truth. They did not want to acknowledge what was plain for all to see; that a man born blind had been cured.

So in today’s Gospel it is deafness, the inability to hear, which is Jesus’ concern. He does not blame the deaf man for his disability; but if he wants to be cured, then he can be. A far greater concern for us should be why some people are cured as a result of prayer, and some are not. A great friend of mine, a loyal trusting Christian, had a cancer which the doctors told him was terminal. He was sure he would be cured; and he was not. So why did God make this, or let this, happen? Come to that, why does he not cure everyone? And why in his own lifetime did Jesus not cure all who came to him? “Because of their unbelief” says one of the gospel writers – and certainly Jesus values a person’s faith, and often tells them that is their faith which has made them whole.

It is a very mysterious business, sickness, and disability, and healing. A young disabled boy in a class my wife taught said “If Jesus was here I would not be like this”. That boy died long ago. But if we believe the Gospels at all, then we must know that the Lord was concerned about him then, and still is. Surely that sort of faith is not ignored by God. On the contrary, when to his surprise the boy, after his death, found himself in the presence of Jesus, he will surely have been told that it was his faith which had brought him there.

He has done all things well, they said: he has made the deaf hear and the dumb speak. But far more importantly, he has given sight to the spiritually blind, and hearing to the morally deaf. These are the things that really concern the Lord about us, and they should concern us too. If only the Pharisees had admitted their own blindness; but they did not, and so they were condemned.
That same discussion on the Sunday programme tried to link disability with sin. Jesus said to the paralytic “Your sins are forgiven you”. This caused anger – ‘who can forgive sin but God only?’ they asked. So Jesus said, ‘Which is easier, to say your sins are forgiven, or to say take up your bed and walk; but that you may know that the Son of man has power on earth to forgive sin (he said to the sick man) get up, take up your bed, and walk’.

Now despite so-called theologians on the BBC, that is NOT, most definitely is NOT, saying that the man was sick because of sin. In fact when they asked about the man born blind “who sinned, this man or his parents” Jesus told them they were wrong in looking for a connection between sin and disability; and he says much the same in other places .. when people are killed by a falling tower, was it sin that brought this on them? Not at all. They are no worse sinners than anyone else.

The truth is, if we are to use language at all we are bound to use similes and metaphors. Spiritual blindness is like being incapable of sight. It is not saying that those who are physically blind are also morally bad. Any more than if I talk of the blackness of despair I am thinking that all Africans are despairing, if I say that a Government policy is just limping along I am saying to be crippled is to be a politician. Of course we must not use language to hurt others, and in this time of great sensitivity we must try to think how others might feel. But to forbid words like “black coffee” or “blind rage” would be to require us to use some language other than English.
And what language should we use? There are doubtless parallels in French and Italian, and probably in Chinese and Swahili. All that’s left to us is to say “I’m feeling a little blue” – and even that might offend some Tories – and as for “in the pink”!

So, just be a little careful about assuming that the BBC is impartial and truly liberal. It is infected with the diseases of the present day - and I hope no one with a cold will take this simile amiss – they need our generous criticism to help them realise that they are every bit as prejudiced as everyone else. Except that unlike us poor sinners, the Media think they are always right.