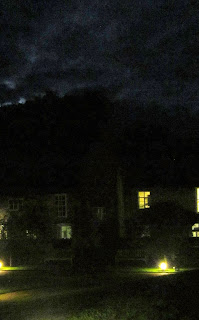 Not Aprille, as in Chaucer's Tales, though the weather was showery and springlike when the Ordinariate went home to Walsingham for our summer Pilgrimage. From the Bournemouth Mission we were more than thirty, including a number of Catholics from local parishes and an Anglican or two. Emphasising our ecumenical (not to say evangelistic) role, we were mostly lodged at the Anglican shrine. It looks very romantic by moonlight, hence the first picture in today's blog. We had travelled the 200 plus miles by coach on Saturday, so we were ready for anything on Saturday morning. The interior of the Catholic church of Reconciliation is lit by very orange lamps, so I gave up on trying to photograph it either before or during Mass. We celebrated SS John Fisher and Thomas More, two of the first and greatest Catholic martyrs of the Reformation era. 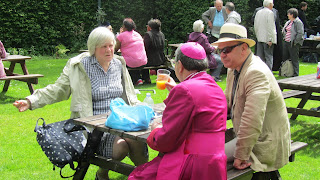 Over a picnic lunch we began the serious business of the Pilgrimage, catching up with old friends. 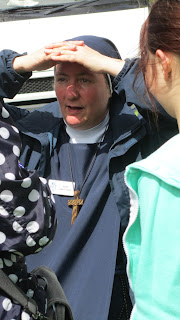 Sister Jane Louise searched the grounds for familiar faces - it was so good to see both her and Sister Wendy Renata helping to organise the event. Now that they are back in Walsingham they have re-established their old friendship with the Anglican Sisters at the shrine. I also called on Mother and found her immensely welcoming. She took part in the healing service at the Holy House on Sunday evening, which many of our Catholic pilgrims found a moving and helpful event. Bishop Lindsay made us all most welcome, and provided me with a place where I could hear the confessions of our Catholic participants (where I was still toiling away well after 10pm). 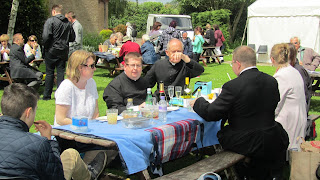 But this is to  run ahead. 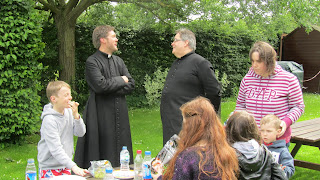 Once we had devoured our picnics and caught up with a great deal of gossip, we started to get marshalled for the Procession. 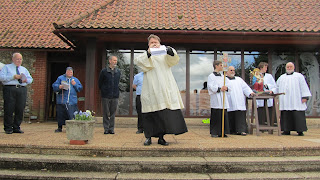 It took  a little time - here is Fr Woolnough in town-crier mode, with Sr Wendy standing by with a loud-hailer. 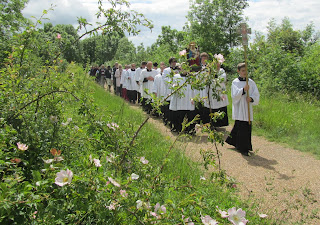 The roses and other wildflowers along the route were a lovely accompaniment to our walk. 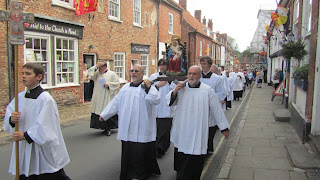 Through the village, and on to the Anglican Shrine, where our priests assisted at Sprinkling with water from the Holy Well. 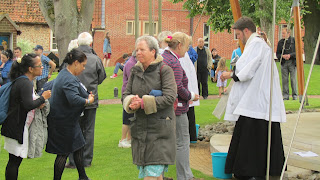 Our party was fortunate in being able to stay on until Monday. We joined the Catholic Parish at Mass on Sunday morning, and on Monday assisted at the Noon Mass (St John Baptist's Day) at the Catholic Shrine, before making our final prayers in the slipper chapel.  Our driver remarked on how fortunate we were in getting a clear route home; expected back around 8.30pm, in fact we were dropped off at Our Lady Queen of Peace half an hour before that. 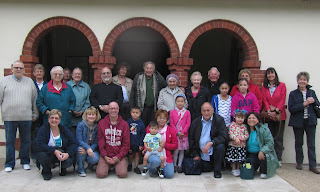 The organisation throughout had been wonderful, and we are all most grateful to Madeleine from our congregation who made all the arrangements. 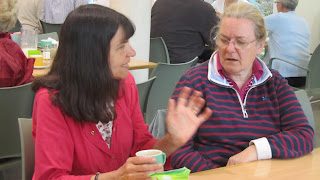 Madeleine (L) expounding in the Refectory
Hardened Pilgrimage-goers were heard to say they had never been on such a well-ordered or happy event. 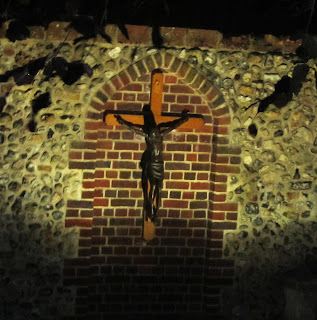 Crucifix in the Anglican Shrine﻿

It was, we thought, especially good that we were staying in the Anglican shrine, meeting new friends there, enabling some of our diocesan catholic friends who'd accompanied us begin to understand the tradition from which many of us came - part of our Patrimony, if you will. 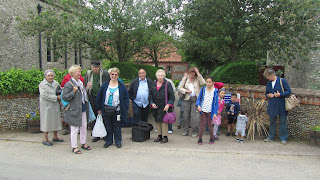 As we departed from outside the slipper chapel many were already planning how to come again next year - and hoping that our Ordinary might soon announce the date for the next National Ordinariate Pilgrimage.