A packed three days in London, just as the temperatures passed 80 Fahrenheit. It was a little unkind of Allen Hall to give Fr John Saward the graveyard slot on Thursday - two hours after a very filling lunch. By the end of his lecture even he was clutching a bottle of water. 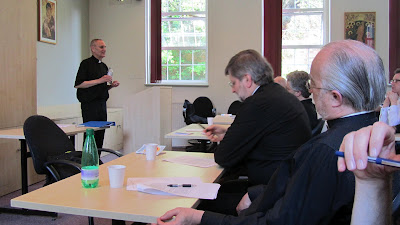 So far as I can tell it was a masterly account of St Thomas Aquinas on the Incarnation and the Sacraments - fortunately his talk was recorded and will be available on line from Allen Hall, so we shall be able to fill in the bits when Morpheus overtook us. 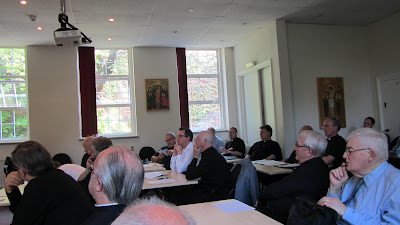 Perhaps though I was the only one whose eyes became a little heavy at times - certainly in the shot above we are all very alert and bushy tailed.
So that was Thursday in Chelsea.

Jane had come up to town with me, and we went to Croydon for two nights staying with a cousin of mine. We returned on Friday to do our cultural bit - the Zoffany exhibition at the Royal Academy. 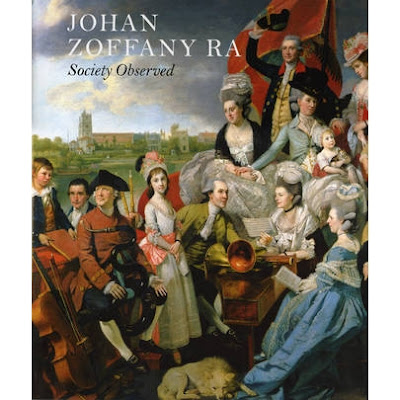 A revelation - I had thought of him as a court painter to George III, which he was, but he also travelled widely, even as far as India, and produced some wonderful images there. Then too he was enchanted by the theatre, and gave us images of Garrick and all the great thespians of his time. If you are able to get there soon, do: and the catalogue is greatly reduced and a wondefful bargain. We also went to the Queen's Gallery to see the Leonardo anatomical drawings - which produced in me a degree of visual overload. 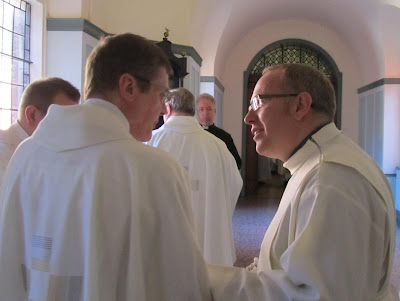 Today it was London for the third day running, this time Westminster where seventeen former Anglican clergy were admitted to the Diaconate of the Catholic Church. Bishop Alan Hopes ordained, our Ordinary, Mgr Keith Newton, was a benign presence throughout, and Mgr Andrew Burnham preached splendidly on the Diaconate. Above is a picture from the moments before the Mass began. Frs Page and Elliott-Smith were no doubt glad that today, unlike Thursday, the tube did not let them down. They had struggled to get to Allen Hall and missed much of the morning session.

Many of those being ordained are old friends of mine, and it was particularly good to have Brian Copus from our Bournemouth Ordinariate Group once more properly dressed in clericals. Good too to have two other residents of Portsmouth Diocese among the candidates - John Maunder from St Agatha's Portsea and John Hunwicke (for he lives in Oxford on the Portsmouth side of the Thames). After Mass, members of the Bournemouth Ordinariate repaired to the Victoria Pub, to drink the new deacons' health. 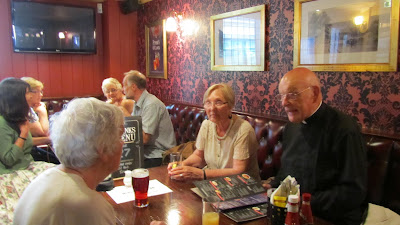 Here on the right of the picture are Fr Brian and his wife Bärbel. On this occasion the new deacons' wives were welcomed to the sanctuary and given a special blessing just before Mass ended. What a great day! Now we eagerly await news of when Fr Brian is to be ordained priest - some of those deaconed today will be priested in their home parishes or local cathedrals as early as next week.
Posted by Edwin at 18:37 No comments: