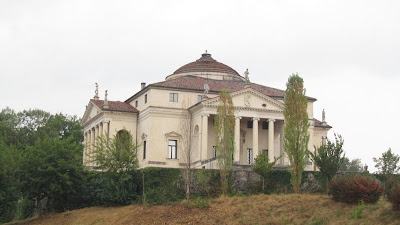 Villa La Rotonda by Palladio (and copied at Chiswick)

Seven days, to see Vicenza, Padua, Venice and Verona! Madness... but it was lovely. Until visiting the Scrovegni Chapel in Padua (aka the Arena Chapel) I had never quite seen why Giotto was reckoned so outstanding. The Frescoes in Assisi are all very well, but they do not have the impact that the Padua frescoes make. They are such a coherent story, from Old Testament to New, from the Nativity of the Virgin to the Life of Christ. Such pathos in the faces of the weeping women - never before captured in paint. How Giotto's contemporaries must have been astounded - art could not be the same again. 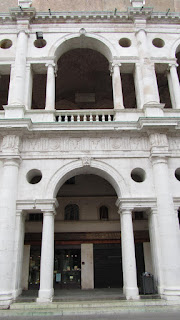 So Padua was one highlight. In Vicenza, the attraction was the star among architects, Andrea Palladio. We see him second-hand in England, first through Inigo Jones - that 'finest barn', St Paul's Covent Garden; and the Queen's House in Greenwich, the Banqueting Hall in Whitehall, followed by a thousand imitators in the next three centuries. Even now, in the polite watered-down classicism of Brentwood Cathedral (archt Quinlan Terry, beloved of the Prince of Wales) there are the faintest echoes of Palladio. But the real thing is just knock-out.


In Italy, though, it is often the unexpected that manages to bowl you over. I had never heard of the Church of Santa Anastasia in Verona; yet it is an absolute wonder - here is just a detail of the ceiling decoration. 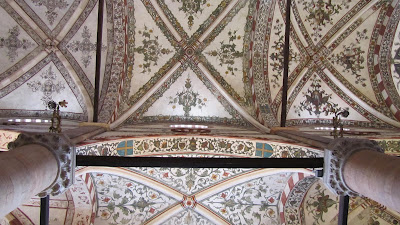 To say nothing of being able to pray at the tomb of St Antony (of Padua, as they call him in Italy; but in his homeland, Portugal, he is Antony of Lisbon). And devotion to Our Lady results in some magnificent, florid, loveable images of the Virgin. 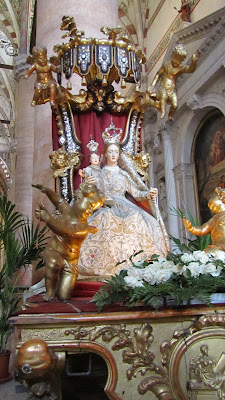 Speaking of the unexpected, we hit Vicenza on the night of a great Parade celebrating the Rua. No, I'd not heard of it either. It is, in effect, a wonderful fairground ride. Painted in outlandish colours, it probably represents the sort of impact our mediaeval cathedrals would once have made (think the West Front of Exeter or Wells, Salisbury or Lincoln, all done in these colours - as originally they were). Fortunately Italy is not overwhelmed by 'good taste'; so the Rua is magnificently OTT, daring to stand as it does before two of the great works of Palladio. 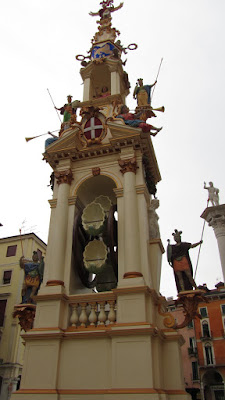 What fun it must be, to be Italian! Perhaps that is what the Ordinariate is seeking - a bit of vulgarity in our religion.

Click on some of these images, please, to see a larger version.
Posted by Edwin at 16:27 No comments: