This weekend we were in Birmingham, in Fr James Cope's parish of Castle Vale. I celebrated and preached again on Sunday morning (picture above). The main event, though was to commemorate their Patron Saint, Cuthbert, which we did on Saturday, then went that afternoon for a little outing to the National Forest and Memorial Arboretum. I had no idea what to expect. 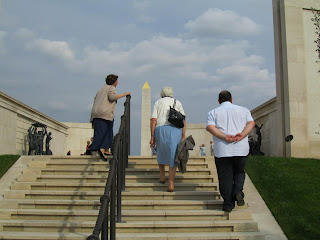 Arboretum to me means a diversity of trees, and mature ones at that. This is all very new, with a railway line to one side and gravel extraction going on nearby. For all that, it is very impressive. Well over 100 acres, and in each carefully defined area there are memorials. I saw in the distance the flag of the RNLI. That institution is greatly revered in Lymington, where we live, for its work rescuing seafarers. There was a large section of the site devoted to the Royal Air Force - most of it was planted with silver birches, which are sadly short-lived trees. Perhaps that says something about the longevity or not of the Arm in which I served for National Service (ending up as Pilot Officer GD (Ground) Fighter Controller, no less!) 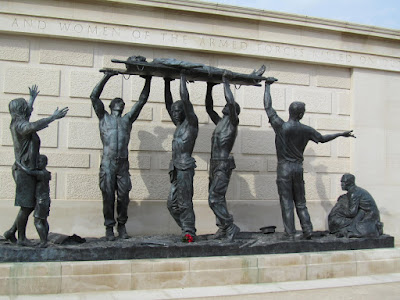 At the centre of it all was a somewhat creepy memorial to all those who have died in conflict on behalf of our country since the end of the second world war. The sculpture for me spoke only of the exaltation of death. No doubt the whole place will be better when the woodland has matured; but still the chapel will look like an afterthought, with its 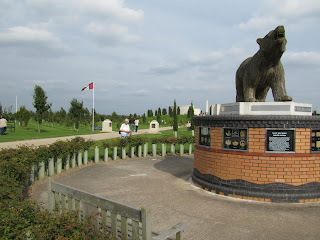 mock pillars clad in timber with carved faces supposedly representing the Apostles but looking more like the seven dwarfs. It is all rather a hotch-potch. None of the austere grandeur of the war cemeteries in France - more as though people had gathered memorials from railway stations and insurance offices where they had become an embarrassment and lumped them together. Maybe it was just me, but I found it terribly depressing - for all the wrong reasons. Just empty secular memorialising, with no notion of resurrection. You will find a more cheerful account of the weekend on the Anglo-Catholic blog!