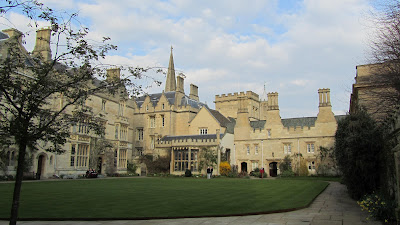 Once every ten years or so comes an invitation back to Oxford, to a College Reunion or 'Gaudy' for those who matriculated in certain years. This time it was for undergraduates of 1957 or earlier. Thinking there might be few of us left after another ten years, a group of us decided to attend. 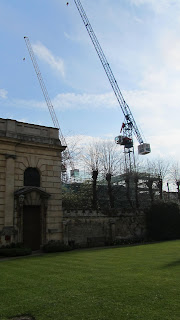 Naturally the present Master of the College greeted us, and encouraged us as ever to open our cheque books. Sometimes he strikes lucky. With a massive building project currently underway, he is looking for the final £5million to complete it. A few years ago a Master who had no liking for the Christian faith went to America seeking cash - and was embarrassed to return with a very large sum earmarked for the restoration of the Chapel. Whether his atheism was the reason or not, the result was that the very handsomely restored 18th Century building was given the name "The Damon Wells Chapel". The group photograph below shows a few friends trying hard to obscure the much disliked nameplate. 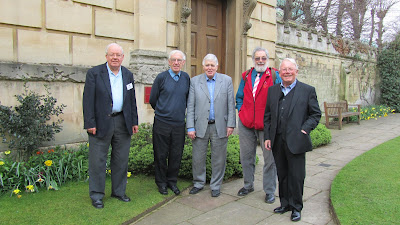 [l-r A Professor of Microbiology,an Anglican Archdeaon now a priest of the Ordinariate, a Director of the RSCM, a Scots Episcopalian Priest, and Yrs Truly - all retired but all fairly active.]
All very well calling a building after Smithson (of the Smithsonian Institute, an early benefactor of Pembroke); or renaming the Old Master's House "The Dr Johnson Building" after the Grand Cham hismelf who spent a year or so as a servitor undergraduate, before penury forced him to leave without a degree*. But to attach an individual's name to the Chapel! 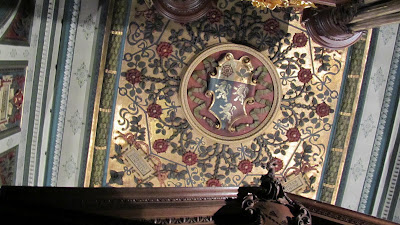 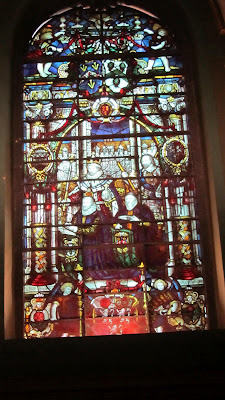 when another former member, the Stained Glass artist Charles Eamer Kempe, went to town on catholicising it. There are painted plaster statues of Saints and Old Testament Prophets, Windows with glass so thick that scarcely any light now penetrates, and a ceiling which seems to belong in a Venetian Palazzo. The window illustrated has James I (in whose reign the College was refounded) with the two earliest Benefactors, Thomas Teesdale and Richard Whitwick. Another window depicts Good Queen Anne. The copy of a "Noli me Tangere" - the original I think by Raphael - makes a reredos to the Altar, while at the other end of the Chapel is a fine Organ Case which was originally in Wren's Sheldonian Theatre. 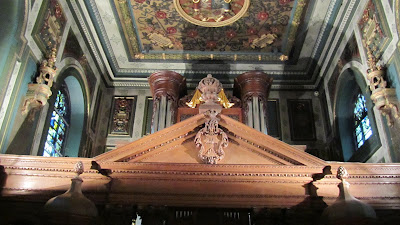 The instrument itself is recent work by a Canadian firm of Organ Builders, and the Organ Scholar of our day, Dr Harry Bramma, had a great hand in seeing to its specification. Last evening he made it sound very good indeed.

So successful was Kempe with his 'restoration' that it is said a Papal Nuncio, later himself to become Supreme Pontiff, was shown the Chapel while on a visit to Oxford and said "Beautiful! Just like one of ours!".

The highpoint of the Gaudy is dinner in hall, just like old times (expect that they have replaced the benches with comfy chairs) - here two friends are paying rapt attention to a speech by one of our peers who actually IS a peer: Bob Carwell, aka Baron Carswell,PC, QC, retired Lord of Appeal in Ordinary. 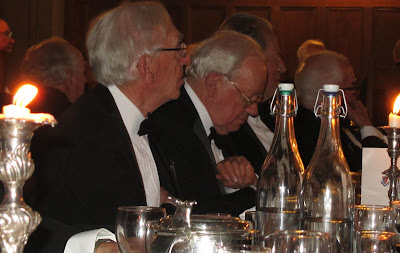 * I am indebted to Dr Andrew Starkie for the following: 'It is very likely that Dr Johnson didn’t graduate because he would have had to then take the oath of allegiance to the (Hanoverian) sovereign. His honorary Doctorate didn’t require it. (Cambridge required the oath on matriculation, Oxford on graduation!'
Posted by Edwin at 22:04 1 comment: 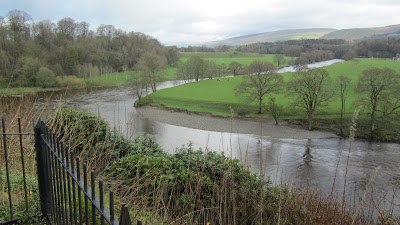 Ruskin's View above the River Lune at Kirby Lonsdale

A breather after the busy-ness of Holy Week & Easter. On Monday we went by train to Lancaster to catch up with our son - now halfway through his doctoral course at the University. We visited Kirby Lonsdale, where the weather was VERY Lake District - sunshine, followed by hailshowers - you might just see that in this picture of the Churchyard. 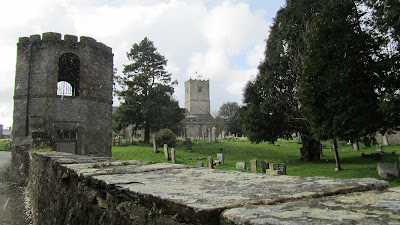 The next day a drive up to Windermere was even more amazing - at one stage a rainbow appeared almost at our feet. 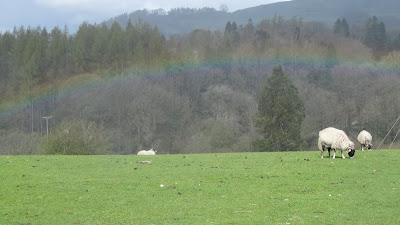 Holehird gardens are a revelation. Run entirely by volunteers of the Lakeland Horticultural Society, there give spectacular views of the Lake and hills beyond. 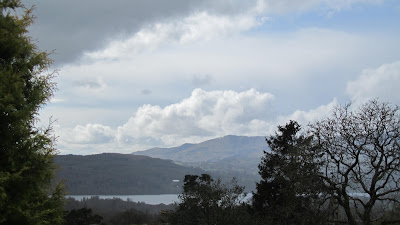 Then a visit to Townend, a National Trust Property on the other side of the Lake. We seemed to see and do a great deal in the two days we were in Lancashire - and Cumbria. 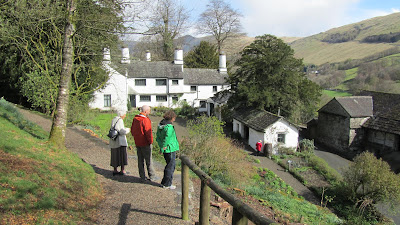 Since then, there has been a visit to Oxford - but I'll save that for another blog.
Posted by Edwin at 19:36 No comments: