It began early on Sunday morning with a call from Fr Brian, my colleague in our Ordinariate Mission. Fr John Lee of St Joseph's Christchurch had been admitted hospital overnight; Fr B must stand in for him. So we set off a little earlier than usual to Bournemouth for our 9.30am Mass. There we heard the good news that our Ordinand, Darryl Jordan, is to be ordained deacon later this month. We were given lunch by Fr Brian and Barbel in Southbourne (a lovely meal, and no need to dash back to Lymington) then in the afternoon he and I conducted evensong and benediction.

Just before 4pm Jane and I left Southbourne and headed off for Oxford. We hit dreadful summer weekend traffic, but arrived in good time for a very important party.  I did some good things, and some less good things, during eight years as Principal of St Stephen's House, but one of the very best was to appoint Ian Boxall as a New Testament Tutor. He has been there ever since, and has established himself as a major contributor to the Theology Faculty in Oxford, while also endearing himself to generations of ordinands through his pastoral care and tireless teaching - especially of the theologically less able. Sunday evening was an opportunity to say 'Good-bye' to Ian, as he moves to the USA to teach in the Catholic University in Washington D.C. Currently there are still negotiations over his Visa (apparently the American Immigration Service knows about Oxford, Mississippi, but not Oxford England) and he is having to prove his academic credentials. 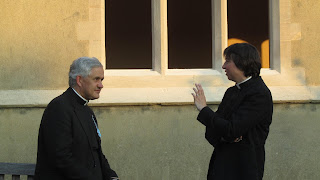 The Pricipal, Canon Robin Ward, with the Revd Lucy Gardiner﻿

It was so good catching up with old friends, and the cloister garden on a truly balmy July evening made the perfect setting. Lucy Gardiner was a member of staff in my days (though at that time without a clerical collar) and it was a delight to see her and her very grown-up son. My immediate successor, Fr Jeremy Sheehy, was also there - almost his first time back from his parish of Swinton in Manchester. 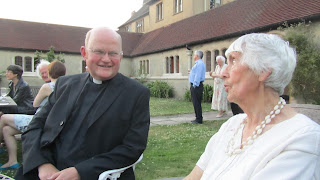 Fr Jeremy with Jane, one-time Flying Buttress
The great and the good (well, mostly good) of Oxford were gathered for this very happy occasion. 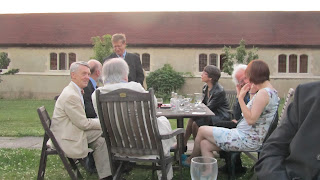 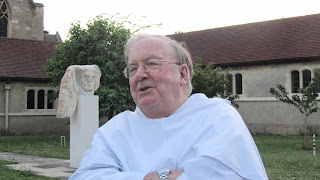 ﻿Somehow the above conjunction reminded me of wartime song about 'coming in on a wing and a prayer' - ah, and the war in question was that of '39 - '45... 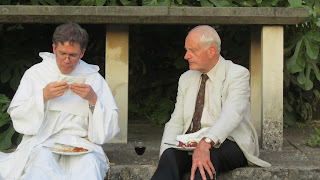 Once we had disbanded Jane and I walked for Old time's sake down to Magdalen Bridge, where of course there was another party going on - in the grounds of Magdalen School. 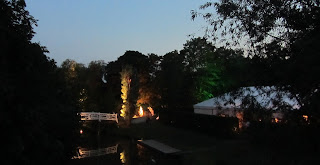 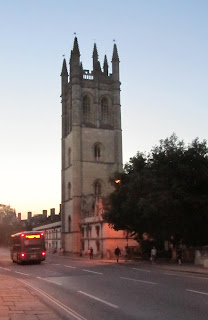 Vyne, the great Hampshire home first ofthe Sandys family (who managed to keep a great house through Henry VII's reign - they might have taught Wolsey a trick at Hampton Court) and then of the Chutes. The first ofthat clan bought the house in the seventeenth Century, was Speaker of the Commons in the time of Richard Cromwell, and wisely died just before the Restoration. The house was largely remodelled﻿ (particularly by his grandson, John Chute) and was given to the National Trust by the lastof the line. We had visited some years ago and found it disappointing because the volunteer steward has seemed so uninterested.
Magdalen tower at twilight 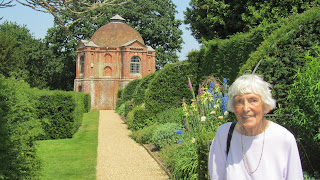 Jane in the garden at the Vyne
It is quite different now - real enthusiasm from them all, and a desire to hand on their knowledge to visitors. A lovely afternoon. Now we are home again and ready for anything - and Darryl's deaconing (a word from our Anglican Patrimony) is to be in London on the last Saturday of this month. Please pray for him, and for Fr John Lee and his speedy recovery.
Posted by Edwin at 21:37 1 comment: