Each year we try to get to the New Forest Show. It is a great three-day event where the great and good rub shoulders with people like us. The first day threatened rain, so we went on Wednesday, the middle day of the three.

We especially enjoy the parade of horse-drawn vehicles; sadly Youngs of Wandsworth is no more (our son ran a pub of theirs in Oxford) now amalgamated - so no more Youngs' farm, no more heavy horses. The local brewers, though, Ringwood, were there with a splendid turn-out.


﻿ It may be just my professional background,  but I couldn't help noticing a certain funereal note at the show. There was a marvellously daffy 'hearse' which was a tandem bike with a sidecar and on it a woven coffin. Then there were various crafts, among them basket weavers - with just such another coffin on display. Among the heavy horse teams were not just one but two undertakers - clearly the only way to go if you want to have been someone in the New Forest. 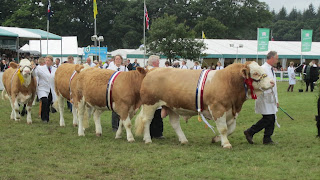 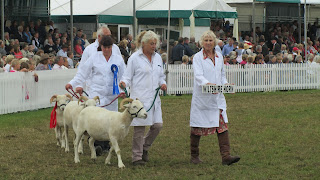 Sadly my pictures of the Earl and Countess of Wessex, who were stars of the show, are among the refuseniks. So  you will have to take my word for it that whereas all the officials, male and female, were heavily overdressed, neither of their Royal Highnesses wore a hat, and both seemed splendidly un-stuffy. 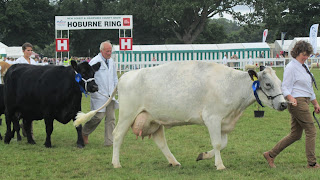 In case this is insufficiently churchy, be reassured; I said Mass earlier in the day for our Ordinariate Mission in Southbourne.

Bishop Richard Moth, Bishop to the Forces, ordained four men as Deacons on Saturday - the first Ordinariate Ordination in the Ordinariate Church in Soho. Among them was our own Darryl Jordan, formerly an Anglican Cleric in Texas, and more recently an assistant at the Priory Church in Christchurch. Here he is supported by two clergy wives - his own on the left, and Mrs Hawthorne on the right. Her husband and their daughter are to be received and confirmed in mid-August. Ceri herself became a Catholic eighteen months ago. 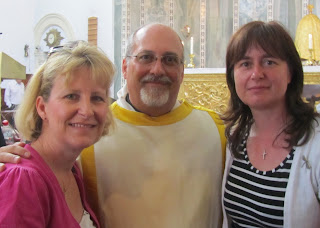 On Sunday Fr Darryl  preached for our Ordinariate Mission for the first time, then stayed on to Deacon the Parish Mass at Our Lady Queen of Peace for Fr Gerry. Meanwhile we had a short study in the Hall before I had to leave for Central  Bournemouth. There I had the unusual experience of saying Mass in an Anglican Church. The Vicar of St Peter's is kindly allowing Fr Bruce Barnes and his people to use his church while their own church building, the Sacred Heart on Richmond Hill, is undergoing major restoration. 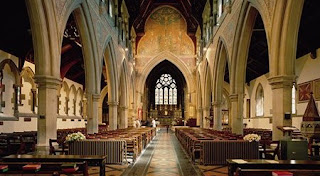