The National at Walsingham 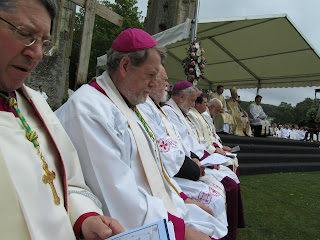 So many bishops, so few of them diocesans. In 1992 there were thirteen bishops, most of them diocesans, who voted against women's ordination. At Walsingham this year there were John Hind of Chichester, and Nicholas Reade of Blackburn - no other English diocesan - except, of course, for the Bishop of Norwich who was there in cope and mitre; but not as a concelebrant. There was a time when he was one of us - not any longer. There is a couple of others still in office who reckon to be Catholics; Europe and London, I suppose. But the 'honoured place' we were promised does NOT extend to appointing new Catholic Diocesan Bishops. So here are a few of the retireds, suffragans and such who still make it to Walsingham for the National; so far as I can discern them, Richborough, Ebbsfleet, Burnley, David Silk, Pontefract and Chichester with, on the throne, Whitby. On the other side of the altar was another handful, and here they are: 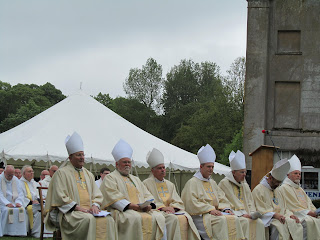 I may be wrong, but I seem to discern Blackburn, Burnley (again), Edmonton, Horsham, Beverley, Ladds and a certain colonial bishop.


Then there were other great and good figures around - you could not miss the Master General of SSC, and here he is with Bishop Martin Warner and the Principal of Pusey House, Fr Jonathan Baker. 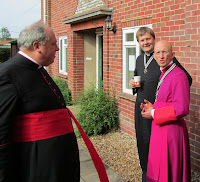 In the Anglo-Catholic blog I said this might be the last such occasion many of us would attend. One of our American readers was upset at this; he seemed to think Walsingham would disappear. Not at all. I am sure we will still be going there; but as members of the Ordinariate we are not very likely, except perhaps as ecumenical guests, to be at the Anglican National Pilgrimage. 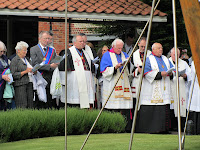 One of the Guardians, (not, I think, in this photo) gave the impression he would not be joining the Ordinariate. He did concede, though, that if he were to become Lord High Chancellor and wear a full-bottomed wig he might reconsider... so clearly we must try to arrange this for him. 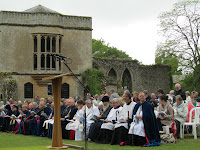 Bishop Lindsay kept a very low profile, sitting with the ecumenical guests and the Guardians. I think the contender for the Chancellorship may indeed be in this last picture.